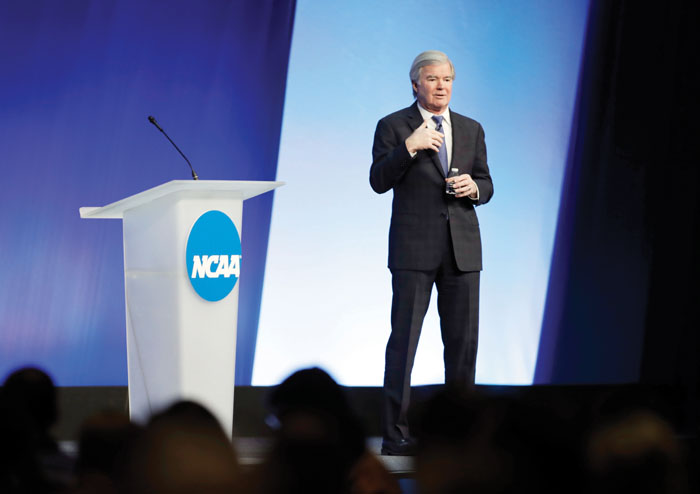 NCAA President Mark Emmert speaks during the NCAA Convention, Thursday, Jan. 18, 2018, in Indianapolis. Emmert says the governing must act on a set of recommendations to clean up college basketball before the start of next season. He expects to receive the report from an independent commission by April 25. The Board of Governors will then be expected to vote on formal proposals at their August meeting. (AP Photo/Darron Cummings)

INDIANAPOLIS (AP) — The NCAA’s five largest conferences approved sweeping changes in everything from medical care to basketball during the holidays on Friday, dashing through the agenda with little opposition and virtually no debate.

Extended medical benefits for former athletes, a three-day break for basketball players over the holiday season, more money for student hosts, and allowing men’s hockey players to receive draft advice before enrolling in college without losing eligibility were all approved. The Division I autonomy group passed all four measures — and 11 in all — in just 35 minutes at the NCAA’s annual convention.

“It’s a great day, all the proposals passed,” said Taylor Ricci, a former gymnast and undergraduate assistant coach at Oregon State who serves on the Student Athletic Advisory Committee. “It’s really, really exciting to see the medical proposal pass. It put a smile on my face.”

It’s a stark contrast to the contentious debates of earlier years.

Medical coverage and mental health benefits for athletes who suffered injuries or sought help during their college careers was extended for at least two years after they leave campus. The proposal passed by 78-1 with the lone dissenting vote coming from an ACC school. Wake Forest’s representative did not attend because of what was believed to be weather-related travel issues.

Each institution will be able to create its own policies for who qualifies for the new two-year requirement. Many but not all of the 65 Power Five conference members already provide post-career medical coverage, including the Pac-12, which has a four-year mandate.

“I think it’s good to do it across the board,” California athletic director Mike Williams said. “I think it’s really the right thing for student-athletes.”

It’s an open question whether the moves by the wealthiest conferences leads to similar changes in other leagues. Schools with less money may find the insurance costs prohibitive unless the NCAA pitches in.

“Maybe that is the discussion or a proposal that comes forward,” Ole Miss athletic director Ross Bjork said. “A lot of times there is some help from the NCAA. This year, there was one-time fund to cover medical and academic expenditures for student well-being.”

Williams said he would also be willing to engage in the discussion.

The measure requiring schools to give basketball players three consecutive days off near the end of the calendar year passed 58-21 with the addition of an amendment that permits one exemption every four years if a team competes in a qualifying tournament.

Even the proposal to raise the student host allowance from $40 per day to $75 passed 64-15 after two students asked voters to reject a smaller increase to $50. The ice hockey measure passed unanimously as part of a seven-part package, which included raising the monetary value of improper benefits requiring restitution from $100 to $200.

“The way this (process) has been laid out, there’s a lot of dialogue throughout the year and if you’re proactive in your conference you have a lot of time to flesh these things out,” Bjork said. “So it’s pretty smooth and when you come to the convention, you just vote.”