Olympic gymnast abused by ex-doctor wants him to suffer 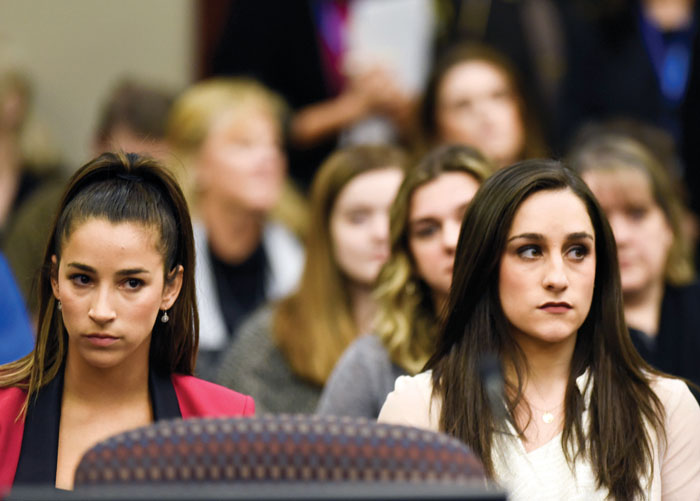 By David Eggert and Mike Householder

LANSING, Mich. (AP) — Olympic gold medalist Aly Raisman on Friday confronted her former doctor who has pleaded guilty to multiple sexual assaults, warning him that the testimony of the “powerful army” of 140 survivors at his sentencing will haunt him in prison.

More than 80 of the women and girls whom Larry Nassar abused under the guise of medical treatment have stood before the court during a marathon sentencing hearing that began Tuesday, describing with eloquence and sometimes tears the harm Nassar did and the impact he has had on their lives.

“You have not taken gymnastics away from me,” Raisman said. “I love this sport, and that love is stronger than the evil that resides in you, in those who enabled you to hurt many people.”

Facing pressure over how Michigan State University handled allegations made against Nassar when he was employed there, the school’s board of trustees on Friday asked the state’s attorney general to investigate but stood by university president Lou Ann Simon — who is facing growing calls to resign or to be fired by the board.

“Through this terrible situation, the university has been perceived as tone deaf, unresponsive and insensitive to the victims. We understand the public’s faith has been shaken. The board has listened and heard the victims,” chairman Brian Breslin said after a closed-door meeting that lasted more than four hours. Trustees declined to answer reporters’ questions.

Nassar also was a team doctor at the Indianapolis-based USA Gymnastics, which trains Olympians.

Raisman said if just one adult had believed Nassar’s accusers and had “the courage and character to act, this tragedy could have been avoided. I and so many others would have never, ever met you. Larry, you should have been locked up a long, long time ago.”

Nassar pleaded guilty to molesting girls at his university office, at home and at a Lansing-area gymnastics club, sometimes in the presence of parents, who were shielded from seeing what he was doing. Already sentenced to 60 years in prison on a separate federal child pornography conviction, the 54-year-old man can expect to be behind bars for the rest of his life. Raisman hoped the testimonies of her fellow survivors will never leave him.

“All these brave women have power, and we will use our voices to make sure you get what you deserve — a life of suffering spent replaying the words delivered by this powerful army of survivors,” Raisman said.

Nassar, who has often looked down or blankly at victims giving statements, broke down when longtime family friend Trinea Gonczar spoke.

“I don’t know who you are now. Maybe I never knew. Maybe none of us did,” she said, as Nassar took off his glasses and wiped away tears.

Earlier Friday, another member of the 2012 U.S. Olympic gymnastics team — known as the “Fierce Five” — said she refused to let Nassar’s abuse ruin her dreams.

“Even though I’m a victim, I do not and will not live my life as one,” Jordyn Wieber said. “I’m an Olympian despite being abused. I worked hard and managed to achieve my goal.”

Michigan Attorney General Bill Schuette, who is running for governor and whose office charged Nassar, said he would provide “a full and complete review, report and recommendation” of Michigan State’s actions over Nassar, but only after the ex-doctor’s victims have had “their day in court.”

The university fired Nassar in 2016, as allegations against him stretching back years came to light.

“After watching many of these heartbreaking statements and reading accounts about them, we have concluded that only a review by your office can resolve the questions in a way that the victims, their families, and the public will deem satisfactory and that will help all those affected by Nassar’s horrible crimes to heal,” the university’s board said in a letter to Schuette requesting his help. Also Friday, state House Speaker Tom Leonard asked the leaders of two legislative committees to open inquiries into Michigan State, which could lead to budget implications for the university and broader policy changes statewide.

The criminal cases against Nassar followed reports last year in The Indianapolis Star about how USA Gymnastics mishandled complaints about sexual misconduct involving the doctor and coaches.

Many of the accusers have sued Michigan State, USA Gymnastics and the U.S. Olympic Committee.

The university board said as information is presented by the attorney general’s office, the board “will act. This can never happen again. …. We continue to believe President Simon is the right leader for the university and she has our support.” Women’s gymnastics coach Kathie Klages resigned last year after she was suspended for defending Nassar for years. Another university doctor, Brooke Lemmen, resigned.

A Title IX probe conducted by the university cleared Nassar of sexual assault allegations in 2014. At least 12 reported assaults occurred after the investigation was concluded, according to a university police report that was provided to the FBI for review by the U.S. attorney.

“I have always done my best to lead MSU and I will continue to do so today and tomorrow,” Simon said in a statement.