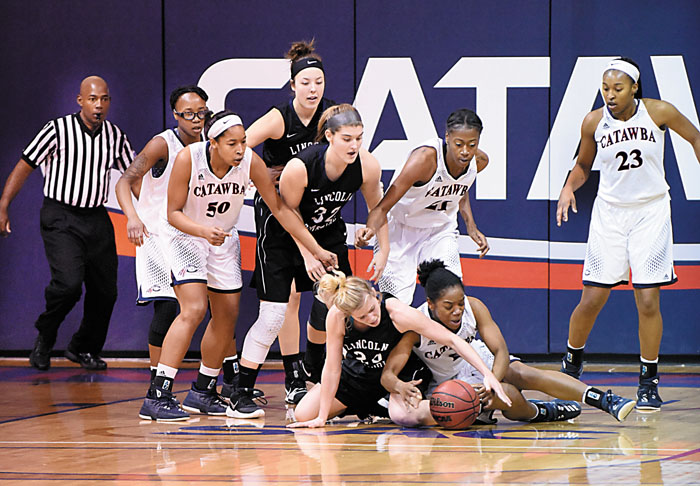 Wayne Hinshaw/for the Salisbury Post ... Eight of the 10 players on the court eyeball the basketball as Catawba’s Serena Brown (5) and LMU’s Rachel Griffith (24) go to the floor, battling for possession, during Saturday afternoon’s game at Goodman Gym. Catawba won the game, 65-47. The other Catawba players looking on are, from left, Shemya Stanback, Alexis Newbold (50), Terri Rogers (21) and Taisha DeShazo (23).

SALISBURY — Inspiration teamed with perspiration, and by the end of a devastating first half, Catawba’s women’s basketball team was assured of ending a five-game losing streak to Lincoln Memorial.

After getting a pregame pep talk from Gary Peters, who coached the 1992-93 Catawba team to the national tournament, the Indians stormed out, played quicker than they have all year, and absolutely pummeled the visitors. Catawba led, 43-21, at the break on torrid 63 percent shooting and cruised to a 65-47  South Atlantic Conference victory.

Lincoln Memorial had whipped Catawba in Harrogate, Tenn., on Dec.2. But home court matters, and Catawba was fired up to play well after some frustrating recent history against the Railsplitters.

“That first half today, that was, by far, the best half of the season for us,” said Catawba senior Terri Rogers, who produced 15 points and nine rebounds. “We came out with a certain amount of determination today. It was like we had to get this win. The mindset was just to put them away, to put them away early. That’s what we did.”

Freshman Shemya Stanback probably is Catawba’s fastest player and it was her crazy energy and two early 3-pointers by Serena Brown that got the Indians flying out of the blocks. It was 12-2 after three minutes.  After five minutes, it was 21-6. When Brown and freshman Taisha DeShazo closed the first quarter with layups, it was 25-6, and Lincoln Memorial looked shellshocked. It was over.

“We’ve had so many grinding, struggling games this year, even games that we’ve won,” Catawba coach Angie Morton said. “And then Thursday (a home loss to Newberry), we really had the blahs, one of our worst games all season. But maybe Newberry woke us up. Maybe we got the message that if we’re going to do anything, we’ve got to play together.”

Catawba has special players in Rogers and Brown (17 points, seven assists). Their production is close to automatic, but wins and losses  in the SAC usually come down to whether or not there’s a third scorer and whether or not the Indians get meaningful contributions from at least six or seven players.

“A lot of times we’re guilty of just standing around and watching Terri play,” Morton said. “She had 29 points Thursday, but we still lost. We have to get it from a lot of people, and today, we did. Contributions were coming from everywhere. Stanback was really good. She’s young and she’s going to make mistakes, but you have to live them with because she changes the tempo so much. Madi Hallman played hurt today, but she made a lot of good decisions and gave us great minutes. Alexis Newbold  (two blocks) was a presence inside.”

Catawba (10-8, 8-3 SAC) got it done in a big way, even with Marshauna Butler, who is frequently that third scorer the Indians need, sitting out with a concussion, incurred in the Newberry game. Morton mostly used DeShazo and sophomore Toni Tucker to fill Butler’s role, and the youngsters were outstanding, shooting 7-for-15 and combining for 19 points.

“We were wondering which one of those two could deliver with Marshauna out, and I’d say that both of them did,” Rogers said. “We’re at our best when we’ve got a lot of different people scoring. That was the case today, and we beat a very good team, a very disciplined team.”

Catawba not only shot 15-for-24 from the field in the first half, it was 9-for-10 on free throws. On the other end, Catawba also was playing some defense and held Lincoln Memorial  (10-7, 6-5 SAC) to 28-percent shooting in the half.

Lincoln Memorial’s Griffith twins, Rachel and Emily, are feisty. Catawba was able to take the 3-point line away from the 5-6 sisters and forced them to drive. Then there was a lot of help on the drive, and it was tough for them to finish against taller people. Rogers changed some shots, and Newbold changed some. The Griffiths combined for 22 points, but they shot 10-for-26 with no made 3-pointers.

Catawba led by as many as 29 points before shooting 2-for-11 and understandably losing some focus in the fourth quarter. The Indians wound up with 27 turnovers and deceiving 46.8-percent shooting, but while it still mattered, they were sensational.

“Offensively and defensively, we came out ready to play,” Morton said. “Those blahs we had against Newberry? We changed that around.”