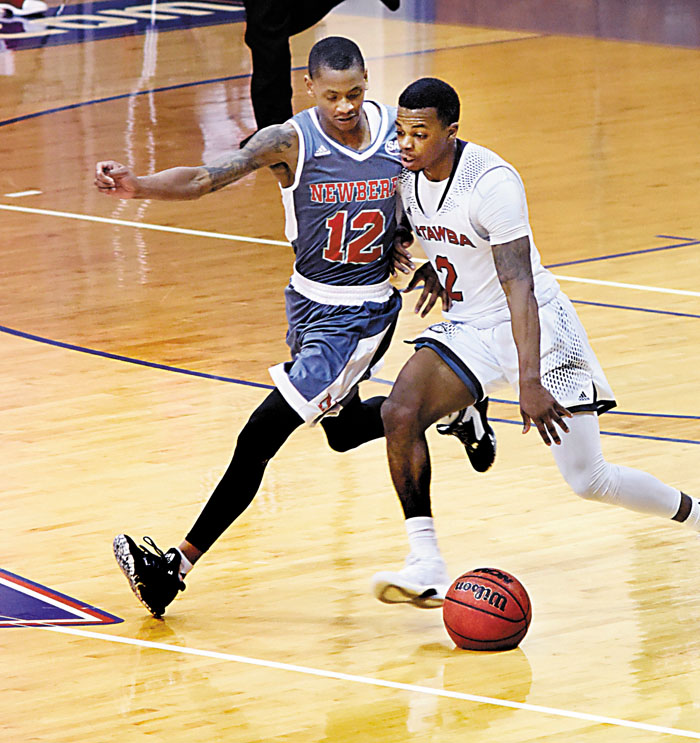 SALISBURY — Just when the Catawba men’s basketball team had everything in order, disorder prevailed Thursday night.

The Indians coughed up a 13-point lead in the final seven minutes and dropped a 92-87 South Atlantic Conference battle with visiting Newberry.

“Seven minutes is a lot of game left,” center Jeremy McLaughlin said after Catawba (5-10, 2-8) had its modest two-game winning streak snapped. “One minute can be a lot. We just let them do what they do — shoot open shots, shoot the threes and speed the game up. We had it won and let them back in it.”

“That was our refuse-to-lose mentality, over the last five to seven minutes,” said winning coach Dave Davis, who headed Pfeiffer’s program for 14 seasons from 1996-2010. “It’s so hard to win on the road in this conference, especially after they outplayed us for much of the game. I think our seniors showed up — down the stretch.”

Catawba shot 51.4 percent from the field and out-rebounded the Wolves, 43-32. But the Indians had 26 costly turnovers and converted only five of 12 free throw attempts. Newberry was 25-for-29 from the line.

“We had a lot of guys play well,” said fourth-year Catawba coach Rob Perron. “But Newberry had great ‘spurtability,’ as Clark Kellogg used to say. We knew they couldn’t hit enough twos to beat us. We had to guard the three-point line and make them make twos over us.  We didn’t do a good enough job of that and they scored in bunches.”

Newberry finished with 13 3-pointers — including four by the game’s high-scorer Rob Valentine (27 points). All came in the first half when the guests grated their way to a 37-32 lead, an edge that disappeared when Catawba opened the second half with eight quick points. There was John McRae’s dunk off an ally-oop pass from Jerrin Morrison, McLaughlin’s authoritative stick-back and a pair of Morrison layups that provided a 40-37 lead.

“We kept repeating, ‘Play our pace. Play our pace,'” Morrison said, after shooting 11-for-21 from the floor and netting a team-best 26 points. “But we fell into their pace. We strayed away from Catawba basketball and started playing Newberry basketball. That’s exactly what they wanted.”

Newberry’s up-tempo offense and ball-hawking defense ultimately told the story — but not before Catawba used Morrison’s three-point play to surge ahead 75-64 with 7:17 remaining. Seconds later Carter Phillips hit an open layup — off another ally pass from Morrison — and all the Indians needed was a leisurely stroll across the finish line.

“I don’t know,” Valentine said. “This isn’t the first time we’ve been down by double-digits. We’ve had games that we didn’t finish. But there was no doubt in my mind that we had to push right then and right there.”

Newberry’s comeback began innocently enough with a layup and two free throws. Then the Wolves used successive 3-pointers by Quamon Burton and James Stepp to draw within 79-74 with 5:44 to play. They caught up two minutes later when guard Xavier Hill beamed in a 3-ball from the left side, tying the score 83-all.

“We were still right there,” Morrison later acknowledged. “We just had a mental lapse. We didn’t stay focused long enough.”

Valentine did. The 6-foot-2 senior from Richmond scored six points in the final minute, including a three-point play that put the guests ahead 90-87 with 33.7 seconds on the clock. Catawba, meanwhile, missed its last three shots from the field.

“From now on, it gets hard,” Morrison said. “We can’t have any relapse, can’t go backward. We’ve got to get amnesia and get ready for our next game.”

Perron said the Indians were “very engaged in the locker room,” and believe their best basketball is ahead of them. “We’ll see,” he concluded.

NOTES: McLaughlin (11 points, 11 rebounds, 3 blocked shots) had a double-double. McRae shot 5-for-8 from the floor and contributed 11 points. … Newberry shot 52 percent in the second half and placed four scorers in double figures. …Valentine spent three years as a toddler living in nearby Spencer. … Catawba begins its second rotation around the SAC when Lincoln Memorial, ranked No. 3 in Division II, visits on Saturday afternoon at 4 p.m.