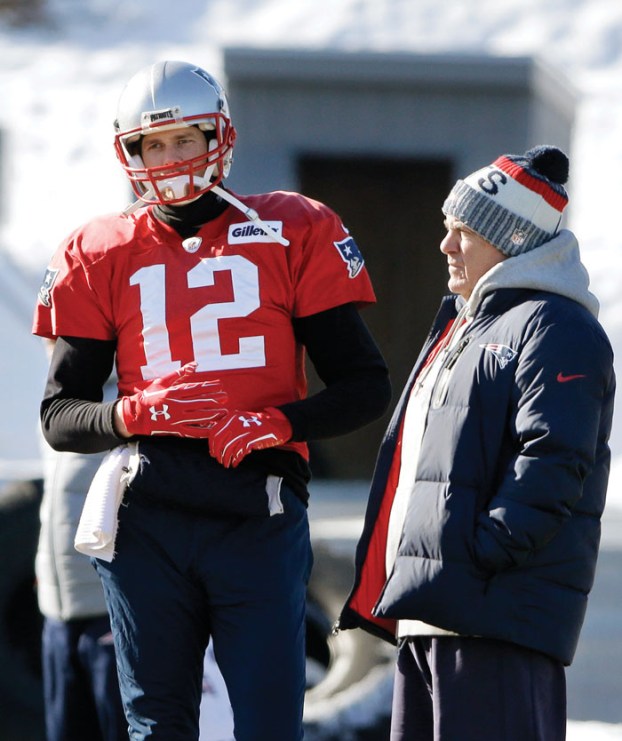 FOXBOROUGH, Mass. (AP) — Tom Brady hasn’t missed many starts during his 18-year NFL career, and no one sounds too worried that he’ll be sidelined for Sunday’s AFC championship game.

Nonetheless, after Brady sat out the Patriots’ practice on Thursday — and did not speak to reporters as scheduled — there was plenty of speculation about the 40-year-old quarterback’s health.

Brady sat out with a right-hand injury after being limited by the same issue a day earlier as New England prepares for its matchup with Jacksonville.

Brady wore a glove on the injured hand during the stretching portion of practice that was open to reporters. He usually wears a glove only on his non-throwing hand. He was listed as a non-participant on the injury report, and his news conference was postponed until Friday.

With scant official information about the nature of Brady’s injury, it fell to backup quarterback Brian Hoyer to address the situation. More than 50 reporters swarmed his locker as he walked through the locker room, and after stepping into the training room, Hoyer returned to find the assembled group.

For the next six minutes he was asked a half-dozen questions about Brady, a quarterback he has now backed up twice. Hoyer said he didn’t see Brady get hurt and wouldn’t elaborate on how much he’s been able to do in practice the last two days.

“I’m always preparing to play, because the truth of reality is you never know when your name’s gonna be called,” he said.

Jaguars coach Doug Marrone expects his defense to line up against Brady, not Hoyer, on Sunday.

“I’m sure he can throw left-handed if he has a problem with his right hand, you know, and throw it just as well,” Marrone said Thursday.

Hoyer was Brady���s backup for three seasons from 2009 through 2011. After leaving in 2012, he started for at least five-game stretches during stops in Cleveland, Houston, Chicago and San Francisco.

Hoyer was cut by the 49ers on Oct. 31 after they traded a second-round pick to New England for Jimmy Garoppolo. He signed as Brady’s backup the following day.

“I prepare every week like I’m gonna play,” Hoyer said. “Whether I do or I don’t, that’s not really up to me.”

Having coached in Brady’s division in Buffalo, Marrone is familiar with Brady’s ability to play through pain.

Brady appeared on the Patriots’ weekly injury report several times during the latter half of this season with injuries to both his Achilles tendon and his left shoulder.

He has never missed a playoff start during his 18-year career. He hasn’t missed any start because of an injury since he sat out the final 15 games of the 2008 season after tearing ligaments in his left knee during New England’s season opener.

NASHVILLE, Tenn. (AP) — The Tennessee Titans kicked off their search for a new head coach Thursday with a pair of interviews — both defensive coordinators who’ve never been NFL head coaches.

The Titans confirmed they interviewed Houston’s Mike Vrabel and Carolina’s Steve Wilks. Tennessee is looking to replace Mike Mularkey, fired Monday after he went 21- 22 and won the franchise’s first playoff game in 14 years.

Wilks has only been a head coach in college at Savannah State in 1999. His first season as defensive coordinator with the Panthers was 2017, but he has coached with Chicago, the Chargers and joined Carolina in 2012. Wilks was assistant head coach in 2015 and 2016.

Interviewing Wilks helped the Titans satisfy the league’s Rooney Rule, and Wilks also interviewed with the New York Giants about their opening. Panthers linebacker Thomas Davis certainly thinks Wilks has earned the right to be a head coach.

“He has done a tremendous job of coming in and taking over this defense and really giving us a chance to be successful,” Davis said.

Brady missed the first four games of 2016 while serving his “Deflategate” suspension. He also popped up on the injury report late that season, but he didn’t miss a game and capped the season with his MVP performance in the Patriots’ comeback win over Atlanta in the Super Bowl.

Devin McCourty chuckled when he was asked about the frenzy created this week by Brady’s injury.