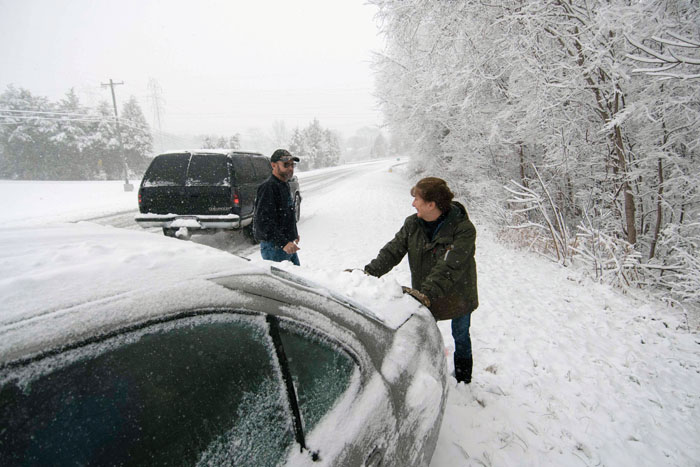 SALISBURY — When people in Rowan County realized Wednesday they were getting more snow than they bargained for, it became a day for adjustments.

At first, weather forecasters predicted a trace to 2 inches of snow. By early afternoon, residents with their rulers and measuring tapes were reporting a good 6 to 6.5 inches of snow through much of Rowan County.

At first, Craig Powers, assistant public services director for the city of Salisbury, thought a small snow event would offer a good practice run for his guys who hadn’t tackled snow- and ice-covered streets before.

“I didn’t think it would be this much snow,” Powers said, “but we prepared for it like we do all other snows.”

At first, Rowan County employees reported to work as usual Wednesday. But they were sent home at 2 p.m. Likewise, many of the businesses that were open Wednesday closed earlier than usual so their employees could get home during daylight hours.

City of Salisbury employees stayed home except for the essential crews needed to respond during the snowy weather. Garbage collection in Salisbury continued, but behind schedule, while recycling pickup was delayed at least a day. City buses didn’t run Wednesday.

Rowan Helping Ministries’ Crisis Assistance, which helps with things such as financial support, the food pantry and clothing closet, was closed Wednesday and planned to operate on a four-hour delay today, not opening until noon.

Jeannie’s Kitchen at the RHM shelter on North Long Street — and the shelter itself — followed a normal schedule.

Meals on Wheels of Rowan, which operates on the same schedule as Rowan-Salisbury Schools, did not deliver meals Wednesday and will not deliver meals again today. More than 200 people are affected, having to make other lunchtime arrangements.

They found themselves plowing snow, shoveling snow, pushing cars, sledding down hills — and all those things you do on a snow day.

The snow came and stayed Wednesday thanks to temperatures that hardly reached 30. The overnight low, pegged at 15 in some places, led to icy road conditions that prompted many of today’s delays and closings.

But help is on the way later today in terms of melting, as the high temperature is supposed to be 41 degrees.

“We’re hoping it warms up enough to turn things to slush around 10 a.m,” Powers said, “so we can move the rest of the material.”

Friday’s forecast calls for a sunny day and a high temperature around 50.

The day of snowy adjustments Wednesday could be divided into the fun and not-fun categories. Those on the fun side included all the kids who didn’t have to attend school and could play in the snow.

Favorite sledding hills throughout the county were filled, such as the one in Fulton Heights at Centennial Park. It was a day for hot soup, hot chocolate, another log on the fire and leaving your wet pants, boots, coats and scarves at the back door.

The not-so-fun side of the snow came for road crews, utility workers, first responders, law enforcement, highway patrolmen and mail carriers who were among the die-hards who performed their jobs no matter what.

A 17-year-old mentally challenged girl went missing about midday in the Long Ferry Road area of Rowan County after she walked off with her dog.

But the girl was found after more than an hour’s search thanks to a concerted effort by the community, Rowan Sheriff’s Office, Rowan Rescue Squad and Miller’s Ferry Fire Department. Heavy traffic at the Faith Rd Food Lion in the snow storm. photo by Wayne Hinshaw, for the Salisbury Post

Wednesday’s snowy day was full of traffic mishaps. Both northbound and southbound sides of Interstate 85 were closed for a lengthy time Wednesday morning near mile marker 68 in China Grove because of accidents. That area is also a major construction zone during the current interstate widening project.

South Salisbury Fire Department responded to the report of a vehicle hitting a house on Old Concord Road near Peach Orchard Road. Numerous cars skidded into roadside ditches during the day or turned completely over, as did a car on Statesville Boulevard.

No life-threatening injuries were reported.

A traffic accident on West Henderson Street Wednesday morning led to downed power lines and forced the closure of the 500 block while utility crews made repairs.

The more-than-expected snow accumulations meant more work for Duke Energy and other utility crews. Duke Energy spokesmen say 4 inches or more of snow on tree branches and limbs can cause their sagging or breaking, and they often fall into power lines and cause disruptions in service.

As of 5 p.m. Wednesday about 70 Duke Energy customers were without power because of outages in several Rowan County locations.

So why did we have more snow than expected?

Steve Monday, whose popular Rowan County Weather website, said based on the models the weather system which caused the snow was supposed to move a lot faster through the region than it did.

“My initial forecast was a trace to an inch,” Monday said. He bumped that up to 2 to 4 inches when he saw the system moving slower.

“It obviously moved even slower and brought more moisture into the system,” Monday said.

The weather system came from the west, and it combined with moisture from the south. Then came the frigid overnight temperatures.

Powers, who oversees the snow removal operation in Salisbury, said he had a fresh crew reporting for work Wednesday night. City crews plowed the main arteries in Salisbury Wednesday and reached into some neighborhoods early on Wednesday.

Powers said he expected plows to “hit them all” soon.