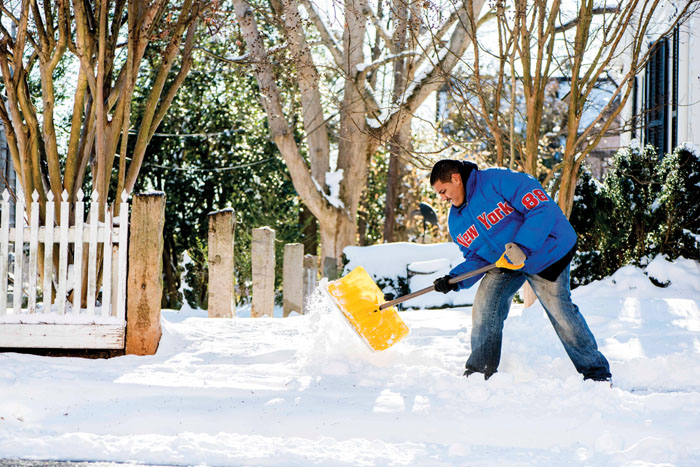 Deon James shovels on the sidewalk in front of a home on West Bank Street on Thursday afternoon. James said he spent most of the day shoveling snow for Salisbury homeowners to make a little extra money. Jon C. Lakey/Salisbury Post

By Shavonne Walker and Elizabeth Cook

SALISBURY — Rowan County began to thaw out Thursday but not enough for the roads to be safe for school buses Friday.

Rowan-Salisbury Schools has called off classes for the third straight day, making Friday an optional workday for teachers.

The canceled classes are a sign of the challenge rural residents face after a winter storm. Thursday’s sunny weather started melting the snow that fell Wednesday. But with near-record lows overnight, they woke up to roads of solid ice Thursday morning and were expected to find much the same today.

Main thoroughfares clear quickly. The secondary roads that criss-cross rural areas are another story. And black ice is a threat everywhere.

Take it slow this morning, the Highway Patrol advises — if you go out at all.

“Travel will continue to be dangerous across your area into the morning hours. We are still urging motorists to refrain from driving unless absolutely necessary,” said Sgt. Michael Baker of the N.C. Highway Patrol.

Baker said Thursday afternoon that troopers had investigated 118 collisions in Rowan County since the storm’s inception on Wednesday. The majority of the wrecks involved property damage, he said.

The lingering effects of the storm led the North Carolina Symphony to cancel the Salisbury performance that had been scheduled for Thursday night. Several organizations announced schedule changes for Friday:

• Rowan-Salisbury Schools will be open for staff from 11:30 a.m. to 4:30 p.m., for those who want to work. Classes resume Monday, now a snow make-up day. High school exams will be given Monday.

• The city of Salisbury’s administrative offices and the Customer Service Center will open on a two-hour delay Friday. Salisbury Transit will run from 9:30 a.m. to 5:15 p.m.

• Rowan County government offices are on a one-hour delay, opening at 9 a.m.

• Rowan-Cabarrus Community College canceled Friday’s classes, as it did on Thursday. However, the college will be open from 1 to 5 p.m. Friday to serve students.

• The Hurley YMCA opens at 8 a.m. Friday with fun camp beginning then, also. The nursery will be open.

Despite more than 500 weather-related emergency calls Wednesday and Thursday, Rowan was lucky compared to other parts of the South — and even some North Carolina counties. The deep freeze that brought much of the region to a standstill also brought tragedy.

At least 15 people died across the South, including a baby in a car that slid off an icy street outside New Orleans and a 6-year-old boy who sledded onto a roadway in Virginia, according to the Associated Press.

Most of the fatalities happened in traffic accidents, including a man knocked off an icy elevated interstate in New Orleans, a West Virginia college student who slammed into an iced-up tractor-trailer and someone in a minivan who slid into a canal in North Carolina.

In the North Carolina incident, the state Highway Patrol said the minivan’s driver died Thursday morning when the vehicle ran off an icy and snowy road and into the canal in Washington County, 130 miles east of Raleigh.

Others were believed to have died of exposure to bitterly cold weather in Louisiana, Texas and Tennessee.

North Carolina is accustomed to getting some snow, but people were surprised at the ferocity of this storm, which dumped as much as an inch per hour from the mountains to the coast and piled a foot of snow in parts of Durham County.

State transportation officials had 2,200 trucks out plowing and salting a day after the storm hit. Despite this, troopers responded to more than 2,700 crashes and police reported hundreds more as North Carolina’s five most populous cities all saw significant snow.

John Rhyne, a maintenance engineer with the N.C. Department of Transportation in the central part of the state, said he’s proud of his crews’ ability to clear roads in the region even after this week’s daunting totals.

“If it was New England and it snowed every day, I think the assumptions would be a little bit different,” he said. “But it is the South. We get four or five good events a year.”

In Atlanta, temperatures remained below freezing until midday. Metro Atlanta’s commuter rail system was operating on a limited schedule as the city recovered from the nearly 1 inch of snow and ice that brought the area to a standstill.

On Thursday, airlines canceled another 200 flights at Atlanta’s airport, and dozens of other flights at airports in Charlotte and Raleigh.

Schools remained closed or had delayed openings across much of the region, effectively giving many students a seven-day break as the Martin Luther King Jr. holiday extended through Thursday.

Louisiana was also struggling to dig out. Every interstate in Baton Rouge remained closed Thursday morning, including Interstates 10 and 12, which were blocked to motorists across the southeastern stretch of the state. By midafternoon, many of the roadways had opened, though bottlenecks remained.