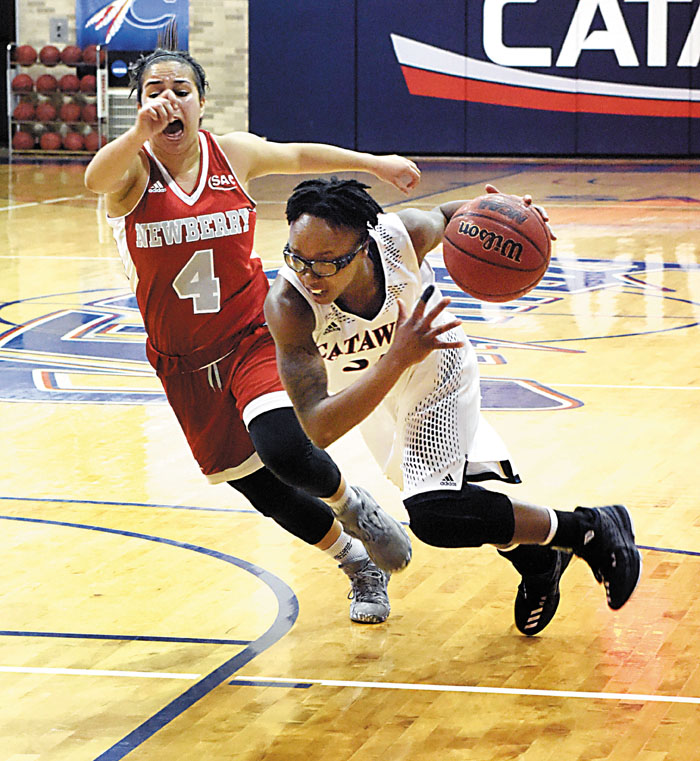 SALISBURY — The Catawba women’s basketball team had won six in a row at home, but the visiting Newberry Wolves made themselves comfortable in Goodman Gym.

Catawba lost for the first time at home since Nov. 11, when it fell to Barton in the season opener.

Newberry shot 51.1 percent from the field, turned free-throw opportunities into automatic points and weathered a 29-point onslaught by Catawba star Terri Rogers on Thursday night. The seventh-place Wolves (10-7, 5-5) posted a 73-65 victory that bumped Catawba (9-8, 7-3) down to a third-place tie with Tusculum in the South Atlantic Conference standings. The Indians had entered the night tied for second with Wingate and just a game back of pacesetting Carson-Newman.

Newberry couldn’t deal with Rogers,  a quick, 5-foot-11 post player who was 10-for-15 from the field, 9-for-10 from the foul line and pulled down 10 rebounds, but Catawba couldn’t stop a lot of people. Newberry’s top four scorers were a long way from home. Meg Essex (21 points), Shelby Britten (15), Samara Hill (12) and Regan McCarty (11) are Australians who have come to the states to play for another Australian native —coach Sean Page.

Rogers had 12 points in the first half, while Serena Brown had five assists. Catawba managed a 30-28 lead at the break despite 13-for-13 free-throw shooting by the visitors and 0-for-5 3-point accuracy by the Indians.

The game swung in the early stages of the second half. The 6-foot-3 Essex towered over the Indians and got three buckets in a flurry. McCarty drained a pair of 3-pointers, and suddenly the Wolves sprinted ahead, 42-35.

Catawba was down, 50-44, heading to the fourth quarter and desperately needed someone to lend a hand to Rogers on the offensive end. Brown contributed 11 assists, but her shots weren’t falling. Marshauna Butler, who can score in flurries, never got untracked. Freshman Taisha DeShazo was Catawba’s second-leading scorer with nine points. Butler and Toni Tucker had six each, but with the visitors putting four women in double figures, it wasn’t enough.

Catawba still had a chance when Elizabeth Webb made a 3-pointer with 4:03 remaining, just Catawba’s second made 3-pointer. That shot cut Newberry’s lead to 63-59, but the Indians didn’t make another field goal.

But with Catawba down 70-65 with 37 seconds left, Alexis Newbold missed a jumper, and Newberry rebounded. That was the Indians’ last realistic chance. Brown and Tucker missed 3-pointers on Catawba’s last, desperate possessions. Hill and Britten made free throws for the final margin.

Catawba finished 2-for-13 on 3-pointers and was outscored 21-6 from the bonus line. That negated Catawba’s 15-7 edge in the turnover column.

This game was originally scheduled for Newberry on Wednesday, but it was postponed by snow. Newberry had a wrestling conflict on Thursday, so the game was moved to Salisbury. Catawba now must travel to Newberry on Feb. 21, during the final week of the regular season.