A North Rowan High grad and ‘Jeopardy!’ champ: Who is Lee Quinn? 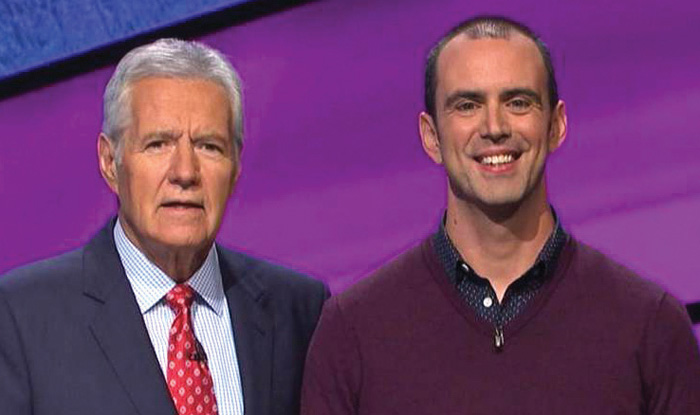 SALISBURY — Chuck and Sandy Quinn have spent exciting, but nerve-wracking, nights in front of their television set the last two days, standing up and cheering each time their son Lee answered a question correctly on “Jeopardy!”

The Rowan County couple have been up and down a lot. Lee Quinn, who is a high school teacher in Raleigh, became the new “Jeopardy!” champion Wednesday evening by winning $22,400 and knocking off five-time champion Gilbert Collins.

Thursday night, Quinn won again. He rang up $20,400 in defending his newly won crown and now has tallied $42,800 over two nights.
He goes for his third win in a row at 7 tonight on WCNC Charlotte (NBC).

Several times during these shows, Sandy and Chuck Quinn found themselves looking at each other and posing their own question:

“How on earth does he know these things?” Sandy asks.

The only thing Lee Quinn would and could tell his parents before Wednesday night’s “Jeopardy” episode was that, “Jan. 17 is my show, and I had great fun.” As with most game show contestants, Lee was under a gag order not to tell the outcome of his appearances before the shows aired.

“If he does not want you to know something, you will not know it,” Sandy Quinn said. “He’s good at keeping a secret.”

Even Lee’s wife, Amy, did not know going into Wednesday’s show that he would win the “Jeopardy!” championship. His appearances were taped in Culver City, California, on Oct. 31. “Jeopardy!’ tapes five shows a day.

Speaking Thursday afternoon from Raleigh, Quinn said that first show was “such a blur to me.”

As he sat down to watch Wednesday night, he didn’t remember many of the clues. He said he didn’t recall the Daily Double question he answered correctly, and he had no idea what he and host Alex Trebek talked about at the end of that first show.

“Just for me to watch and remember was fun,” Quinn said.

For the record in that first appearance, Quinn buzzed in on 24 questions and answered 22 correctly. He went through two complete categories — “Banner Years” and “Presidential Burial Places” —  without missing any of the prompts.

Not many people know where President Martin Van Buren is buried. Quinn knew. Lee said he also lucked out when the last question under “Banner Years” was about the Prague Spring in 1968. He traveled to Prague last summer.

“I was fortunate to have some categories that fit well with my background as a history teacher,” Quinn said on Twitter,  “and on many other days, (Collins) would have gotten the best of me.”

Quinn locked down the initial victory by knowing the Final Jeopardy clue under the category of “Special Days.” Again, it was in his history wheelhouse.

Lee Quinn, 40, is a 1996 graduate of North Rowan High School. He was class valedictorian. He grew up in the Bennett Heights subdivision off Ridge Road, and he and his sister, Traci Quinn Thompson, spent plenty of summer days at the Franklin Pool.

Quinn’s parents said he was reading as a 4-year-old, and the family reports he was pretty much an academic star throughout school in the North Rowan district. Sandy Quinn said her son was always forever asking questions and working hard in school.

“I told my parents they could have shared a little bit and not given it all to him,” Traci said of her brother’s smarts.

Lee also was musically inclined. He took piano lessons, learned the guitar and played the trombone in the North Rowan High Band. Traci also considers her brother a gourmet chef.

After high school, Lee Quinn was a double major in history and religious studies at the University of North Carolina at Chapel Hill. He then earned his master’s in teaching and a teaching certificate.

Quinn accomplished all of that in five years and has been teaching at Broughton High School in Raleigh since August 2001. He splits his time between teaching history and serving as coordinator for the school’s international baccalaureate program, which includes a required “Theory of Knowledge” course.

In that class, Quinn enjoys challenging his seniors on how they know what they know on topics such as arts and ethics.

At Broughton, Quinn also has been an assistant band director and head of an occasional jazz band class. He loves the work.

Lee and Amy Quinn have a 4-year-old son and are expecting a baby girl.

When you appear on a nationally syndicated show such as “Jeopardy!” people naturally have plenty of questions. Here are some insights Quinn was able to provide Thursday:

• Trebek is a cool dude. The interaction you see Trebek have with contestants on the air is pretty much the extent of their time with him. Quinn said he liked Trebek and thought he is a true professional.

The contestants have a lot of interaction with the rest of the crew, who are “great, helpful and kind,” Quinn said.

• Becoming a “Jeopardy!” contestant can take a long time. Quinn first took an online test of 50 questions with about 8 seconds cycling between each question. He later received an email inviting him to an audition in Atlanta. That was almost two-and-a-half years ago.

At the audition, he took a written test, then played a mock game as the show’s recruitment team studied how he might perform on air and under pressure. He was then told the show might get back to him in 18 months or so.

Quinn received a call from Sony Picture Studios in September to come to Culver City for an Oct. 31 taping, the day after his 40th birthday.

• The toughest thing to master is the buzzer. “Definitely the clicker,” Quinn said. You are not allowed to ring in until a manually operated bank of lights goes on. Timing and rhythm are essential. The television audience does not see those lights.

“I’m sure I made some frustrated faces,” Quinn said of getting the hang of the buzzer.

• Contestants are told to bring multiple sets of clothes. That’s in case they win and are on more than one show during the day’s taping. Quinn took three changes of clothes, but don’t read anything into that.

He wore a purple sweater Wednesday evening because Broughton High’s colors are purple and gold. The wardrobe advice he was given was not to wear all white or any crazy patterns.

• Yes, contestants wear makeup. Quinn was touched up before each taping. Contestants were told to show up, however, with their hair done. “I don’t have a lot of hair to do,” Quinn said.

• The things contestants talk about briefly with Trebek during introductions come from lengthy, written responses they give to questions. Quinn said the show asked him and others which things they really wanted to talk about, and those items were boiled down to three bullet points for Trebek.

• The pool of 12 contestants take a shuttle together to the studio, and they get a break for lunch. Those not playing sit in the audience and watch the games. Quinn was able to watch two shows before his name was drawn and he was called up to compete with Collins and Amanda Griggs.

A drawing also determines where the challengers to the reigning champion stand.

Some great things happened to Quinn in relation to the show. His mentor from his student teaching days in Orange County — someone Quinn hadn’t heard from in a long time — reached out to him after Wednesday night’s episode.

Also, when he was talking with one of the contestants in his group, Quinn learned he used to work with her father. They were, in fact, two-thirds of a pub quiz team back in those days.

During his trip to Los Angeles, Quinn was able to meet up with friends and former students.

As you can imagine, Quinn’s cellphone has exploded with text messages and calls. He prioritized things and was able to winnow down texts to about 100 before he went to bed Wednesday night.

Thursday night, he watched the “Jeopardy” episode with friends and family at the Person Street Bar in Raleigh, which is not too far from his home.

Chuck and Sandy Quinn recorded Wednesday evening’s “Jeopardy!” so they could watch it again more calmly during the day Thursday. Their home phone and personal cellphones also went crazy after Wednesday’s show.

“It was nice to have all that support and know everybody was behind him and pulling for him,” Sandy said.