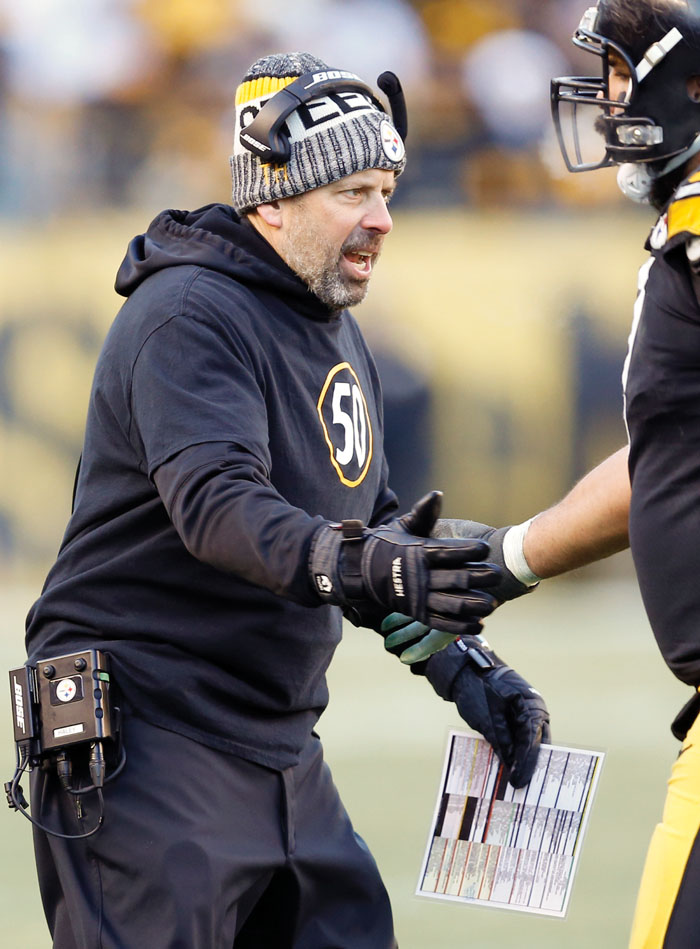 FILE-This file photo from Jan. 14, 2018 shows Pittsburgh Steelers offensive coordinator Todd Haley as he greets players as they come from the field during the second half of an NFL divisional football AFC playoff game against the Jacksonville Jaguars in Pittsburgh. A person with direct knowledge of the decision, confirmed to The Associated Press that the Steelers will not renew Haley's contract. The person spoke on condition of anonymity Wednesday, Jan. 17, 2018, because there was no formal announcement from Haley nor the team. Haley just finished his sixth season with the team. (AP Photo/Keith Srakocic, FILE)

PITTSBURGH (AP) — Todd Haley spent six seasons helping turn the Pittsburgh Steelers offense into one of the most successful in the NFL.

All the yards and all the touchdowns weren’t enough, however, for the fiery offensive coordinator to keep his job.

The Steelers chose not to renew Haley’s contract on Wednesday, three days after the AFC North champions were ushered out of the playoffs in a 45-42 divisional round loss to Jacksonville.

“I have made the decision to not renew the contract for offensive coordinator Todd Haley,” coach Mike Tomlin said in a statement. “I would like to thank Todd for his contributions to our offense the past six years, and we wish him the best in his coaching future.”

The 50-year-old Haley, whose father Dick spent two decades as Pittsburgh’s director of player personnel in the 1970s and 80s, was hired in 2012 and tasked with developing an offense around quarterback Ben Roethlisberger.

Though there appeared to be some tension between the two early in Haley’s tenure, the results rewrote much of the team record book.

The Steelers finished in the top seven in total offense in each of the past four seasons, including third in 2017.

Pittsburgh won three division titles and reached the playoffs in each of those seasons thanks in part to Haley’s playcalling, the ascension of All-Pro wide receiver Antonio Brown to one of the best players in the league and the arrival and development of All-Pro running back Le’Veon Bell.

Brown is the only player in NFL history with five consecutive seasons with at least 100 receptions. Bell is one of the best all-around backs in the league and his 406 touches in 2017 were 60 more than any other player.

Roethlisberger tied for the NFL lead in yards passing in 2014 and just as importantly saw the number of times he was sacked decrease substantially even as he put the ball in the air more frequently.

Haley and Roethlisberger downplayed any discord between the two, though Haley swapped places with Randy Fichtner in the middle of the season, moving from the sideline to the coach’s box.

Haley was injured during an incident at a bar near Heinz Field on New Year’s Eve shortly after the Steelers wrapped up a 13-3 season with a victory over Cleveland.

Haley was not considered a direct party to the incident and he said afterward he had the team’s full support and was told it was not an issue moving forward.

Less than two weeks later, Haley finds himself looking for work. Tomlin declined to endorse Haley’s return during his season-ending news conference on Tuesday. A day later Haley’s productive if tumultuous time with the Steelers was over.

Whoever replaces him will have one of the most talented offenses in the NFL at his disposal. The entire starting offensive line is under contract for 2018. Roethlisberger has already stated publicly he will be back for a 15th season.

Brown is signed through 2021. Bell’s situation is a little more unclear. The team can place the transition tag on him as it did this season, though he told ESPN.com he could sit out or retire if he and the Steelers do not reach a long-term agreement. Bell said on Sunday his hope is to remain in Pittsburgh.

Fichtner is the leading in-house candidate to take over for Haley. Fichtner has been with the team since 2007 and has spent the past eight years as quarterbacks coach. He has a solid rapport with Roethlisberger and the transition would likely be very easy for a team built to win now.

For all of Haley’s acumen, Pittsburgh’s offense came undone this season in critical moments due to curious playcalling.

Twice the Steelers were stopped in fourth down situations against Jacksonville. A first-quarter drive ended when Bell lost yards on fourth-and-inches.

Pittsburgh had the ball and a chance to tie the game early in the fourth quarter when Roethlisberger through incomplete to rookie JuJu Smith-Schuster on fourth down when advancing the ball a mere foot would have extended the drive.

Those sequences came a month after the Steelers lost to New England at home on Dec. 17 when a potential go-ahead touchdown pass to Jesse James in the final seconds was overturned on replay and Roethlisberger attempted a pass after a fake spike two plays later.

The pass was picked off and the Steelers lost, costing them home-field advantage throughout the playoffs, a sequence that helped cost Haley his position with the team.