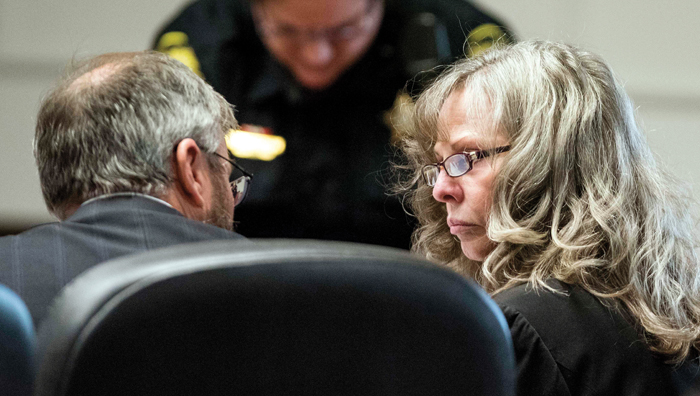 SALISBURY — Shirley Goodnight Pierce suffered a painful death when she was stabbed so violently the knife used by her killer broke off in her neck, severing her carotid artery and jugular vein, forensic pathologist Dr. Clay Nichols said in court Tuesday.

Nichols is the former deputy chief medical examiner with the state who performed the autopsy on Pierce’s body. Nichols told jurors on the fifth day of testimony in Marlene Postell Johnson’s murder trial that Pierce would have lost consciousness within three to five minutes after the stab wound to the neck and subsequently would have died.

“It would be painful,” Nichols said. “She would be aware of the pain while conscious.”

Some of Pierce’s family could be heard crying as the doctor described how long it would’ve taken her to die after the injury to her neck. One relative overcome with anger and emotion was escorted out of the courtroom by another family member and did not return.

Nichols said upon examining Pierce’s body, he saw the tip of the knife blade sticking out behind her left ear.

Rowan County investigators have said that Johnson believed Pierce was having an affair with her estranged husband, Ervin Johnson. They said they found no evidence that Pierce and Ervin Johnson were in a relationship.

Pierce was engaged to businessman Chuck Reeves, who found his fiancee dead inside her Kannapolis home. Detectives said Marlene Johnson repeatedly harassed and once assaulted Pierce in an incident at a Concord restaurant.

Assistant District Attorney Barrett Poppler asked about the amount of force that was likely used to attack Pierce. Nichols said any adult or older teen could make the type of wound he found.

Nichols also noted the number of bruises, scratches and superficial stab wounds on Pierce’s body. Nichols said she had a stab wound to the forehead, a cut between her eyebrow, a bruise on her nose, and a bruise on her cheek, as well as injuries consistent with nail scratches or marks.

There were various short and long cuts on Pierce’s body including on the top of her head and her nose, chin and cheeks. She also had stab wounds to her left thigh that the doctor said were the result of a bladed object.

Pierce also had cuts to fingers on both hands and the palms and backs of her hands, and her arms. Nichols said the cuts to Pierce’s hands were defensive in nature.

He further explained that some of the cuts and scrapes to Pierce’s hands likely came as she fought back against her attacker.

Nichols said Rowan County Sheriff’s Office investigators requested fingernail scrapings but Pierce’s fingernails were so short there was nothing to scrape.

Davis then requested that all the testimony the doctor gave be stricken from the record and not admitted. Judge Stuart Albright said that since none of Nichols’ prior testimony has ever been questioned prior to the current inquiry, he would allow it to be used.

Davis questioned whether Nichols mishandled a 2011 autopsy involving a Cumberland County teenager who was shot to death. In that case, Nichols said out of the presence of jurors that he did not find a bullet or a bullet fragment in an autopsy. He said a fragment was discovered sometime after he submitted his findings in that autopsy by Gerity. Nichols said he and Gerity had an adversarial relationship and he believed the fragment was found after the autopsy was performed for malicious reasons.

The bullet fragment was found in the scalp of the victim, Terrell Boykin, but not by Nichols.

Davis asked if the State Bureau of Investigation conducted a review of Nichols’ work in that autopsy. Nichols said he spoke with a special agent in 2013. Nichols said he was not charged criminally in the matter and his superior, Dr. Deborah Radisch, signed off on his current appointment at East Carolina University.

The doctor said he was “separated” from his job but that did not relate to the Cumberland County autopsy.

Judge Albright said he doesn’t believe the previous autopsy and the subsequent investigation did anything to refute Nichols’ credibility in the Pierce autopsy. The judge did not allow the line of questioning before the jury, saying he felt it could confuse jurors and unfairly prejudice them.

Nichols also testified that he believed the defendant had some cuts to her hands that were slightly older than those she sustained in Pierce’s murder. Court testimony showed Johnson went to the apartment of her estranged husband, Ervin Johnson. While there, she was accused by Charlotte authorities of breaking a glass window and replacing it with Plexiglass. That incident is where some of the older cuts to her hands came from, testimony showed.

Jurors also heard from Johnson’s boyfriend, author and professional speaker Tim Connor. Connor said he met Johnson on Facebook, but she asked him to tell her family they met at a book signing.

Connor said throughout their relationship, Johnson asked him to “fib” about a few other things. He told a lie to investigators when they initially asked whether Johnson was with him the night before Pierce’s body was discovered.

Connor had told detectives that Johnson was with him because Johnson asked him to say that she was at his Huntersville home.

Connor said he and Johnson were dating in 2011. Connor said he never met Pierce and had never seen her. He said he and Marlene Johnson had conversations about Pierce and Ervin Johnson, but that he tried not to talk about it because he believed it was negative in terms of their relationship.

He estimated Johnson brought up the name of Shirley Pierce about half a dozen times over a year.

Connor said on July 22, 2013, he had a biopsy for prostate cancer and Johnson drove him to and from the appointment. He said afterward, she went home. The next morning, he said, Johnson suggested they go to breakfast so they ate at a nearby Cracker Barrel.

Connor said that same day — July 23, 2013 — Johnson called him about 2 or 3 p.m. and was upset. He drove to her home, which he testified was about eight miles away, and while there a relative called Johnson to tell her that Shirley Pierce was dead and the Johnson was a possible suspect.

Johnson later told Connor to go to her home and retrieve a computer and iPad, which he did and took them to his home. He said he tried to find out from her what was going on. Connor indicated Johnson wanted him to get some more things from her home, but he didn’t understand what items she wanted. He went to her home but saw law enforcement officers there and returned to his home.

Connor at some point took the iPad to James Davis’ law firm, where it was later seized by law enforcement. He said Johnson asked him to deliver it to the law firm, which is on North Main Street across from the courthouse.

Testimony is expected to continue with Tim Connor when the trial resumes at 9:30 a.m. today.