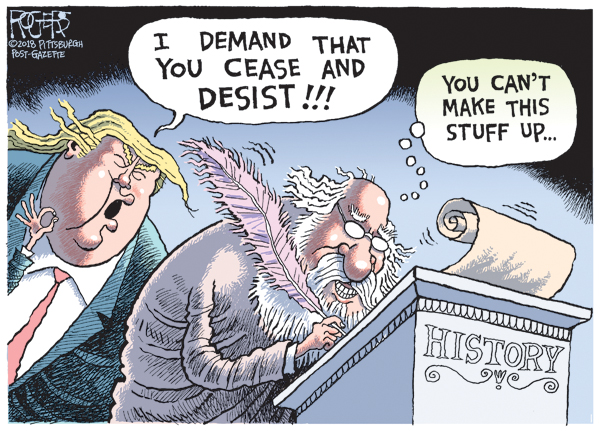 Years ago, people used to ask me what journalists should do to combat the nation’s drift toward “factish” and “truthy” logic. What was needed, I’d reply with misplaced confidence, is robust fact-checking. If news media were more aggressive in calling people out for lying, I predicted, they’d be less likely to do so with impunity.

Well, in the years since I prescribed that remedy, Snopes and PolitiFact have come of age, and newspapers and TV news outlets have beefed up their fact-checking operations. Indeed, fact-checking has become a minor industry.

And it hasn’t helped.

To the contrary, politicians and partisans are more likely than ever to cry “Fake news!” whenever truth hurts their feelings or facts puncture their fantasies. And if fact-checking has become a minor industry, so has conspiracy theorizing, as bizarre fantasies about pizza parlor child molestation rings, “hoax” shootings and the so-called “deep state” infest our political discourse, making some people famous and others, stupid.

So when a journalist asked that same question last week, I demurred. All we can do, I said, is our jobs.

That being the case, Steven Spielberg’s latest movie arrives not a minute too soon, providing as it does a timely reminder of just what that job entails. “The Post,” which went into wide release Friday, is a tour de force about the 1971 standoff between The Washington Post and the federal government over publication of The Pentagon Papers, top-secret documents proving the government lied as it led the nation deeper into the fatal quagmire of Vietnam.

The decision by Post publisher and neophyte businesswoman Katharine Graham to put her newspaper and, conceivably, her freedom, at risk by going up against the Nixon White House is rightly regarded as a feminist coming of age. But it is also a journalistic watershed. In battling Nixon all the way to the Supreme Court with everything at stake, the Post embodied the sheer guts it sometimes takes simply to report the truth.

Of course, 1971 was a long time ago, a point Spielberg makes by lingering lovingly on typewriters, rotary dials, linotype machines and other artifacts of the pre-digital newsroom. We see people gazing enraptured at their newspapers the way they do their smartphones today.

It is a not-subtle reminder that things were different then. Yet, the movie also offers a rousing, timely reminder that for all that’s changed, one thing cannot: journalism’s mission must always be to hold power accountable.

So yes, all we can do is our jobs.

Frankly, I was initially dissatisfied with that answer. I was disappointed I wasn’t able to offer some innovative strategy to turn back the tide of factishness and truthiness. Then it occurred to me: That’s not journalism’s responsibility.

No, our responsibility is to provide information, not to enforce the proper use thereof. I’m reminded of the old adage about leading horses to water. I’m also reminded of the motto of the Scripps company, which started life as a newspaper publisher: “Give light, and the people will find their own way.”

We in journalism have, I submit, fulfilled our part of that bargain, doggedly if imperfectly. The question that will define the future is whether “the people” will fulfill theirs or whether they will choose to believe, as too many too often do, that partisan resentments justify factual apostasy. That’s something they must decide. It’s not journalists’ call to make.

It’s up to the people to find the courage to hear it.

Leonard Pitts is a columnist for The Miami Herald. Readers may contact him via email at lpitts@miamiherald.com.

DG Martin: An African-American version of the ‘Great Gatsby’…