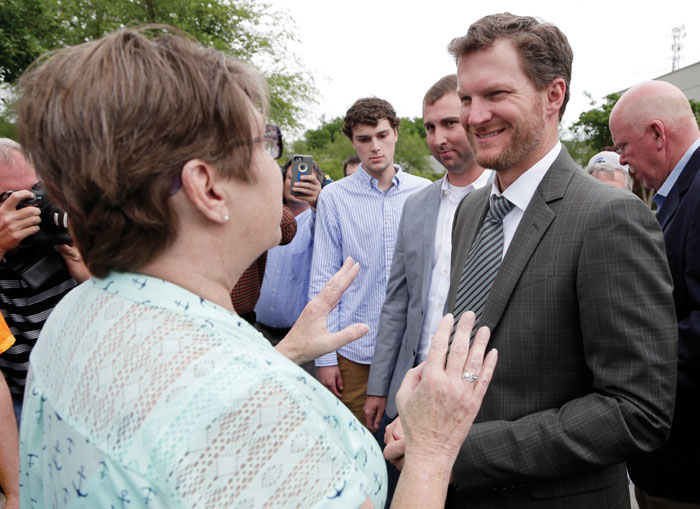 FILE - In this April 25, 2017, file photo, Dale Earnhardt Jr., right, talks with a fan after a news conference at Hendrick Motorsports in Concord, N.C. Earnhardt Jr. barely had time to ease into retirement before NBC Sports gave him a full workload. Earnhardt will be part of the network's pregame show before the Super Bowl, then head to South Korea for NBC Sports' coverage of next month's Olympics. (AP Photo/Chuck Burton, File)

CHARLOTTE (AP) — Nearly every day brings a new experience for Dale Earnhardt Jr., who spent the first 43 years of his life living in a bubble that consisted of NASCAR and not much else.

Now that he has retired from full-time racing, he’s got time to experience new adventures. Just last weekend, he went to brunch — his first brunch ever — with his wife and friends, then was convinced to get his first pedicure .

The best is yet to come.

NBC Sports announced Tuesday it will use Earnhardt in its pregame show before the Super Bowl, then send him to South Korea for the network’s coverage of next month’s Olympics. Earnhardt retired from driving in November and signed on to be an analyst for NBC Sports, a gig that begins in July.

“It’s not going to be putting me anywhere outside of my comfort zone, obviously I’ve never been to a Super Bowl or South Korea,” Earnhardt told The Associated Press. “What they are asking me to do is just go out there and be myself and hopefully get people interested in tuning into NASCAR.”

NBC plans to use Earnhardt at the Super Bowl in outdoor events and activities taking place in Minneapolis in the days before the game. At the Olympics, he’ll visit the speed skating venue and accept a recent social media invite from American bobsled team pilot Nick Cunningham to ride in a bobsled.

“We can’t wait to get Dale’s take on what is one of the most compelling aspects of the Winter Games — sports that offer a mix of speed with the prospect of danger, an equation that he knows very well,” said Jim Bell, president of NBC Olympics Production and Programming.

“Instead of the turns at Daytona, it’s the downhill, the luge, and the short track oval. And I think he will have something unique to offer about the need for speed on snow and ice.”

Earnhardt, a third-generation NASCAR driver, is the son of Hall of Famer Dale Earnhardt Sr. He grew up around racing and its grueling 11-month schedule that has drivers on the road and away from home at least three days a week. Although the Super Bowl is typically held before NASCAR’s season-opening Daytona 500, rabid Washington Redskins fan Earnhardt said he never had a desire to go to the game.

“Not everybody goes to the Super Bowl,” he said. “I was too young when the Redskins were going, I was still in school, and they haven’t been since 1991. I definitely would have gone if they had played in one. But as a fan of a particular team, it sort of feels wrong to go to another game. I’d have a hard time even going to see the Redskins play in an opponent’s stadium. If I had no purpose to be at the Super Bowl, besides to just see a game, it was hard to make that kind of time commitment.”

And the Olympics? Well, that’s a dream trip that Earnhardt never had the time to even dream of making. Asked Tuesday where he’s been outside the United States, he listed Germany and France — trips he took with his now-wife — as well as Mexico, Canada, Japan and Australia. He also once spent 24 hours in Monaco.

Then he was sidelined for the second half of the NASCAR season with concussion symptoms, and Earnhardt was forced to expand his lifestyle.

“When I started peeling away the layers, I started losing some of that habit and getting more comfortable doing things,” he said. “When we weren’t in the car, you weren’t supposed to be focused on anything else. When you went and did something, go to a concert, visit another city, you almost felt guilty for doing it. Like, we already have a pretty good lifestyle as race car drivers and can afford just about anything. So I just felt bad enjoying yourself.

“But when I was out of the car for so long, my doctor encouraged me to put myself in a lot of complex situations. That meant going to concerts and places I’ve never been and situations where I could push my anxiety. I’ll tell you, I was like: ‘Wow, this is what retirement is going to be like.’”

He’s not nervous about transitioning into his new television career, or that his first real appearances as an NBC Sports analyst will be on two worldwide stages. Earnhardt, who recently learned to ski while in Aspen with Jimmie Johnson, is planning on bringing boots and a helmet to South Korea to try out the slopes. He’s also eager to try the cuisine.

The only drawback is that pregnant wife Amy can’t make the trip, and Earnhardt said he doesn’t sleep well when they are apart. He figures worrying about her as she awaits their first child will make for long nights in South Korea.

After his time at the Olympics, he’ll head to Daytona Beach, Florida, for the season-opening Daytona 500. Earnhardt is the grand marshal for the race.

“I definitely wouldn’t miss the first race of the year,” he said. “I feel like I should be there.”

This story has been corrected to show that Earnhardt is 43, not 42.