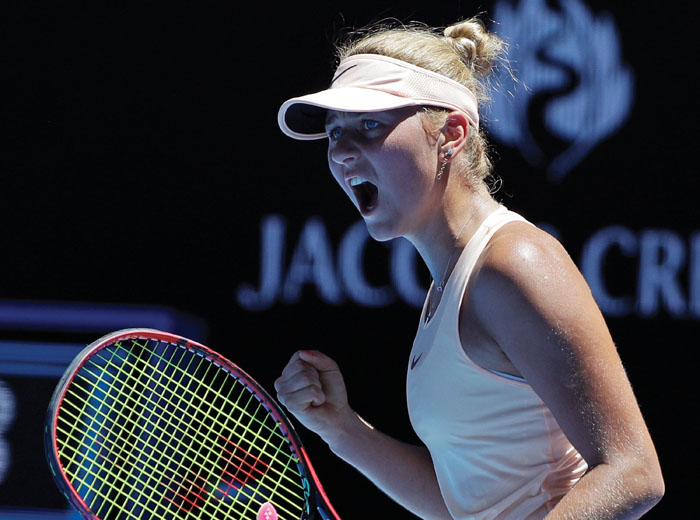 MELBOURNE, Australia (AP) — Marta Kostyuk was such a perfectionist when she started playing tennis as a child, she’d blow up in anger if she missed even a single ball. It made tennis completely unenjoyable.

“I always want to win, no matter what,” the Ukrainian teenager said. “If I was losing, it was a tragedy. It was, like, I don’t want to play anymore.”

Now, after beating Olivia Rogowska 6-3, 7-5 on Wednesday to become the youngest player to reach the Australian Open third round in two decades, Kostyuk is finding peace with the ups and downs of the sport. All at the wise old age of 15.

Kostyuk’s performance in Melbourne is remarkable considering just how far she’s come in such a short time. The Australian Open is not only her first Grand Slam, but her first main draw at any WTA-level tournament.

Yet the bubbly Kostyuk’s game looks more than ready for this moment. Granted a wild card to the qualifying draw after capturing the Australian Open junior title last year, Kostyuk won three matches to earn a spot in the main draw, then upset the No. 25-seeded Chinese veteran Peng Shuai in the first round.

Perhaps an even tougher challenge, she followed that up with a convincing win over Australian wild-card entry Rogowska in front of a partisan crowd at Margaret Court Arena, the No. 2 show court at Melbourne Park.

The stats weren’t pretty — 45 unforced errors to just 22 winners — but Kostyuk handled the pressure well. A power player who hits big off both sides, she kept going for her shots even when she misfired.

And misfire she did aplenty. While serving for the match, she clubbed a ball off the frame of her racket that nearly hit a spectator in the crowd. (Kostyuk blamed serving into the sun: “You throw the ball and you hit the sun, actually.”)

Kostyuk was an acrobat growing up and was so talented, she placed fourth in the Ukrainian national championships — as a child. But she wanted to spend more time with her mother Talina Beiko, a former pro tennis player and now coach, so she gave up acrobatics to focus on tennis at 11.

Since winning the Australian Open girls title last year, she’s made the jump to the pro level. She’s represented by a high-profile manager, former world No. 3 Ivan Ljubicic, who currently coaches Roger Federer. The impact on her game has been immediate.

“Ivan is always helping me when he sees me,” she said. “And Roger, we speak twice. You know, really, like speak. Not like, ‘Hey, how are you.’ That was nice.”

With her run in Melbourne, Kostyuk has become the youngest player to reach the third round since Martina Hingis made the quarterfinals at 15 in 1996.

This has already brought her a great deal of attention — the kind that has proved difficult for other young players in the past. Part of the reason breakthroughs like Hingis’ are so rare these days is that the WTA Tour has limited the number of tournaments teenagers can play. Kostyuk is only eligible for 10 tournaments at age 15.

Even so, young players are still “hyped a lot,” said one-time Swiss prodigy Belinda Bencic, who was a U.S. Open quarterfinalist at 17.

“When you win one, two matches, everybody focuses on you,” said Bencic, who has since struggled with injuries and lost her second-round match at the Australian Open only two days after an upset win over Venus Williams. “Suddenly, you’re the one who has to win, which actually shouldn’t be like that.”

Bencic hopes Kostyuk “keeps enjoying all of this and remembers the feeling how it is when you’re excited first time, first Grand Slam, and to keep it this way.”

Kostyuk’s next opponent will be a much tougher test — Ukrainian Elina Svitolina, who is seeded fourth. Svitolina has been dealing with what she called “injury issues” and wasn’t sure if she’d be fit enough to play in Melbourne. Still, she goes into the match the heavy favorite.

“She has nothing to lose, so that’s why I know she goes just for everything,” Svitolina said of her younger countrywoman. “A little bit like headless chicken.”

Kostyuk gives herself a chance, however. She believes she’s playing better and better with each match.

ON A DAY OF CLOSE CALLS, DIMITROV FENDS OFF MCDONALD IN 5TH

MELBOURNE, Australia (AP) — It was quite a predicament for Grigor Dimitrov, still basking in his triumph at the ATP Finals as he entered his second-round match at the Australian Open against a young American who had never won a tour-level match before qualifying for the first major of the season.

Mackenzie McDonald is ranked 186th  and played college tennis at UCLA. He had never played anyone ranked better than No. 69 before facing the third-seeded Dimitrov on Wednesday.

McDonald broke Dimitrov’s serve three times in the fourth set and pushed the fifth beyond 12 games — there’s no tiebreakers in fifth sets at the Australian Open — before his first double-fault of the set suddenly gave Dimitrov a match point.

“Really the game wasn’t there today. I wasn’t feeling well on the court — fourth set was a disgrace,” said Dimitrov, who took Rafael Nadal to five sets in a marathon semifinal in Melbourne last year. “But I won with what I had. That was my fighting spirit.

“He played an unbelievable game (but) experience in the end really helped me.”

That seemed to be a theme of Day 3.

“It’s an important victory for me,” said Nadal, who won the French Open and U.S. Open last year but had his preparation for Australia interrupted by an injured right knee. “After a while without being on the competition … second victory in a row, that’s very important.”

In the match preceding Nadal and Mayer on Rod Laver Arena, Wozniacki felt like she was “one foot out the tournament” before winning six straight games to advance.

“That was crazy,” Wozniacki said. “I don’t know how I got back into the match. I was like, ‘This is my last chance.’

Wozniacki won the next nine points, and 24 of the 31 points played from the first match point.

She’ll next play No. 30 Kiki Bertens.

After his enthralling comeback victory over Shapovalov, highlighted by a between-the-legs shot on an important point, Tsonga will meet 17th-seeded Nick Kyrgios in what shapes up to be an entertaining third-round encounter.

Kyrgios had a 7-5, 6-4, 7-6 (2) win over Viktor Troicki, overcoming audio problems at Hisense Arena and complaining to chair umpire James Keothavong, who ended up turning off his microphone and later being hit in the head by a wayward tennis ball.

At the other end of the experience spectrum, 15-year-old qualifier Marta Kostyuk followed up her first-round win with a 6-3, 7-5 victory over wild-card entry Olivia Rogowska.

The Australian Open junior champion, who entered the season-opening major ranked No. 521, became the youngest player since Martina Hingis in 1996 to win main draw matches in Melbourne.

Things will get harder for her now. She next faces fourth-seeded Elina Svitolina, who had a 4-6, 6-2, 6-1 win over Katerina Siniakova.

Another Ukrainian, Kateryna Bondarenko, beat 15th-seeded Anastasia Pavlyuchenkova 6-2, 6-3 and will next play No. 19 Magdalena Rybarikova.

Alize Cornet beat 12th-seeded Julia Goerges 6-4, 6-3, ending the German player’s 15-match winning streak, and Elise Mertens lost the first five games before beating No. 23 Daria Gavrilova 7-5, 6-3 in a match that finished just before 2 a.m. Those results meant seven of the eight seeded players are out of that quarter of the draw.

French Open champion Jelena Ostapenko struggled at times before beating Duan Yingying 6-3, 3-6, 6-4 and will next play No. 32 Anett Kontaveit.

Among the men advancing were Kyle Edmund, No. 6 Marin Cilic, who next plays Ryan Harrison, and No. 10 Pablo Carreno Busta, who will meet No. 23 Gilles Muller.

McDonald didn’t quite get the biggest upset of the day, but he got some valuable experience in front of a big crowd on a center court and from his first-round win over Elias Ymer.

He attacked Dimitrov’s second serve and his backhand, turning a potential weapon almost into a liability for the Bulgarian.

“I know how close I was to winning,” said McDonald, who had practiced with Dimitrov and Roger Federer in the past, and should rise up the rankings. “But he’s a good player, he’s been out here a while.

“I was soaking it all in. It was a long match and I enjoyed every single moment of it. I’m super happy about it.”