Prep Basketball: After 400 wins at West, Gurley keeps marching on 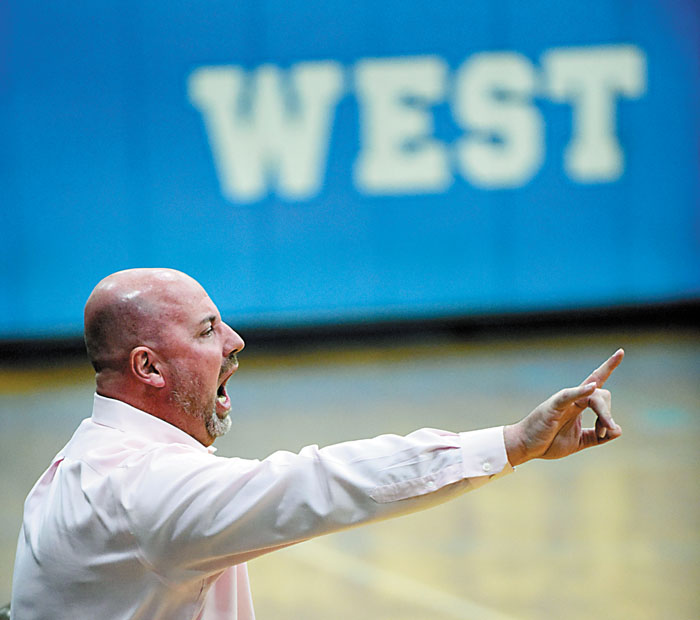 MOUNT ULLA — It’s another basketball Friday night in the pale blue West Rowan High gym. South Iredell is in the house, and 5-foot-7 West senior Josiah Dixon crashes into the ancient bleachers in fearless pursuit of a loose ball.

Dixon’s head makes an audible thud, an ugly sound that makes fans wince, but he barely pauses. He’s whirling back down the court. Coach Mike Gurley smiles at the effort, at the intensity. In the bleachers, Ryan Mattox, the guy they called “Bam Bam” when he kept knocking down jumpers for West’s 1997 state champs, yells, “That’s West Rowan basketball, right there! Yeah, West Rowan basketball!”

Gurley has been teaching, preaching and coaching West Rowan basketball for 21 seasons now. He was hired by former principal Henry Kluttz prior to the 1997-98 season. His love of the game hasn’t diminished during that period, but his knowledge of the game has swelled considerably.

“I had only one way to play when I first came to West from Lexington (fast and furious) and we usually were quick enough to rush opponents out of what they were comfortable doing,” Gurley said. “But every team you coach is different, and there were some seasons when I tried to jam some round pegs into square holes. I tried to drag kids up to a higher level, and if they couldn’t get it done, I moved on to the next one. But as you get older — and hopefully smarter — you start asking yourself what kind of pegs you have and you try to put those pegs in holes where they’ll fit.”

He put a lot of pressure on himself in his early days at West, waking up every morning worried sick about winning the next game. He enjoys it more now. A lot less stress. His teams aren’t nearly as talented as they were 15  years ago, but that’s made him appreciate his players more, savor each victory more.

“It’s not like I made West Rowan basketball successful,” Gurley said. “Jack Lytton was the coach who got it all started. Charlie Hellard took it to the next level. Then Bobby Shipwash (he coached West’s 1997 champs) took it all the way. I followed three great coaches here. I’ve always looked at this job as temporary. I’m the keeper of the flame, just carrying the torch until that next guy takes it. Hopefully, I’ve done my job well enough that the next guy will think of himself as following Lytton, Hellard, Shipwash — and Gurley.”

Gurley has done his job well enough that he logged his 400th win at the helm of the Falcons with Friday’s stunning North Piedmont Conference triumph against South Iredell. To put that 400 number in perspective, Bob Hundley, who coached 18 seasons at North Rowan, is second in county history with 278 boys basketball wins.

Gurley reached another milestone (500 career wins) a week earlier. He won 102 times as a youthful varsity coach in Lexington.

The current Falcons are not a vintage Gurley team in a lot of ways. They lack the foot-speed and the depth needed to apply defensive pressure. It’s difficult for them to come back if they get in a hole. But Gurley has found the right spots and the right ways to employ players such as Dixon, Cole Myers, Payne Stolsworth and Jay Joseph. He’s accentuated their strengths, while disguising their weaknesses. He’s given them opportunities to shine. They’ve frequently come through.

“We’re limited in a lot of ways  and we’re playing a lot of untested guys, guys who don’t have much varsity experience,” Gurley said. “But I think the people we play get surprised by how determined Dixon is and they get surprised by how long Myers is. Myers (who is 6-foot-6) has become a pretty good rebounder.”

“Martavio has been playing a very cerebral game,” Gurley said.

And of course, West still has 6-8 Caleb Mauldin, the county player of the year as a junior and the county’s scoring leader again as a senior with 24.2 points per game. He tossed in 35 in Friday’s upset.

“Caleb is a better player now than he was last season, and that’s saying something,” Gurley said. “It seems like he’s always got five defenders around him, but he’s not freaking out. He’s learned that what you do when they’re throwing everybody at you is just go sit down on the block and become the best offensive rebounder in the building. The last two years Caleb could depend on Austin Love to chase down some tough rebounds, but now Caleb has to get some of those tough ones himself.”

West limped into the seventh-place game of the Dale’s Sporting Goods/Sam Moir Christmas Classic with a 4-7 record after being blitzed in the first round by Carson and losing a close one to 1A North Stanly in the consolation bracket.

“The seventh-place game we get down five against South Rowan in the second half,” Gurley said. “But then we took some good shots. Yeah, we missed them, but Caleb got the offensive boards and put them back in. All of a sudden, we’re up 10, and we win that game.”

That matinee comeback against South at Catawba’s Goodman Gym didn’t look like much at the time, but now it looks like a turning point in West’s season. The Falcons have won their last five. Now they’re 9-7. More importantly, in a conference where they were supposed to finish fourth, at best, they’re 3-0 and tied for first. The two NPC teams they haven’t played yet in a league game are very experienced Carson and very fast Statesville.

The focus for West since the Christmas tournament struggle has been reducing turnovers.

“The two games we lost at Catawba we had something like 40 turnovers,” Gurley said. “And that was 40 turnovers against two teams that didn’t press us. In other words, it was all on us, just unforced errors. What we’ve tried to emphasize is to value the ball and get a shot on every possession. Obviously, the best thing that can happen is making a shot, but the second best thing that can happen is missing a shot because we’ve got a decent chance to rebound it.”

High-powered South Iredell is a pressing team, so when the Vikings came to Mount Ulla on Friday with a 12-3 record and averaging 76 points per game, it looked like a nightmare matchup for plodding West.

But it wasn’t. West fell behind 19-11 but never panicked. The Falcons beat the press and won, 88-77. West had topped 70 points only one time this season before Friday.

“All our guys made smart passes against the press, but mostly it was Rankin and Dixon taking care of the basketball,” Gurley said. “Rankin’s vision was great. His decisions were good almost very time, and if we beat their press, we attacked and we finished. We’d had some decent wins this season (vs. A.L. Brown and North Rowan at home), but our guys surprised me a little on Friday. They gave themselves a chance by not turning it over, and if you stay in it, you can win it.”

Upsets like Friday’s are what makes basketball intriguing. Basketball is still a blast for Gurley after all these years. This team probably would’ve made him jump in front of bus in 1998 when he coached liked his head was on fire, but now he’s content to make these guys the best they can possibly be.

“I’ve had a chance to work under three great principals in Henry Kluttz, John Williams and Jamie Durant, and I’ve had a chance to coach so many great people,” Gurley said. “This year’s team, we’re just having fun and doing the best we can. I’m enjoying it because I know exactly what I’m going to get from these guys — that’s everything they’ve got.”

The fire is still burning. The keeper of the flame marches on.