Nuns and priests and Frosty the Snowman: a glimpse of a play from the inside-out 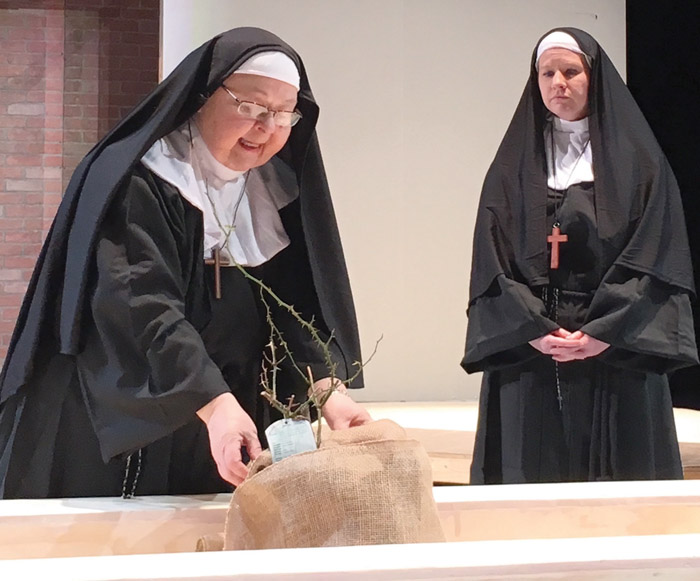 I’ve seen it three times, but I am particularly eager to see this local production because it stars two of the most versatile actors around, Becky Lippard and Bill Reilly. Becky and Bill have played the spectrum — lovers and fools, villains and saints, Democrats and Republicans — and this time, they play Sister and Father. And this time, they’ve got Shanley’s exquisite words in their back pockets.

“It’s simply a matter of finding a character’s need,” Bill tells me. “It’s how that need conflicts with the circumstance of their person and the environment in which they find themselves in that can be compelling.”

Both Sister Aloysius and Father Flynn have given their lives to the Catholic Church, but that’s where their common ground ends.

Shanley’s script is so fine that it leaves plenty of room for St. Thomas Players Artistic Director Claudia Galup to coax out its ambiguities. After all, the play is called “Doubt” for a reason.

I asked Becky and Bill to share some thoughts. Team players both, they iterated that they are grateful to be supported by Emma Rose as Sister James and Lillie Oden as Mrs. Muller.

JH: What has Claudia Galup done directing-wise that has helped you find a part of your character that you might not have found on your own?

Becky: Wow. What hasn’t she done? I had such a preconceived notion about this part and how it should be done, based heavily on Meryl Streep’s portrayal in the movie. She has encouraged me to find my own self in the words and situations laid out on the page.

Bill: Claudia’s a great listener. She will often find a door, in a sentence or even a word, that opens up a whole new world of the play for me. We can often cling to our own interpretations of things, and she’s so earnest about it, she can’t not be right.

Bill: The thing I find most regrettable about Father Flynn is his narcissism. I find him to be truthful, yet his vanity, coupled with his desire to be adored, make him seem self-righteous. I’ve certainly gone through phases in my life where I realized I was so intent on getting someone’s approval and admiration that I wasn’t actually paying any attention to them or to other people I was hurting in the process. It is his commitment to love, however misguided, that I adhere to and respect.

Becky: Sister Aloysius is very off-putting because she is so direct and matter of fact. She sugar-coats nothing. If she were Southern, she wouldn’t even say “bless your heart” after she criticizes someone. But she has an overwhelming love for her students and a burning need to protect them. She truly wants the best for them, and I love her for that.

JH: What is your favorite line to say?

Bill: “The message of the constellations: had he imagined it, or, had he seen the truth once and now has to hold onto it without further reassurance.” Holy-moly, I love that line. Again, there are several messages here, but the one that resonates with me is that my dream, my self, is not a constant but can always be reimagined.

Becky: “It [Frosty the Snowman] should be banned from the airwaves.” This line is so Sister Aloysius. Is she serious, or is her wit just that dry? Come see for yourself and decide.

“Doubt: A Parable” is (like a parable) brief, with a running time of 90 minutes.