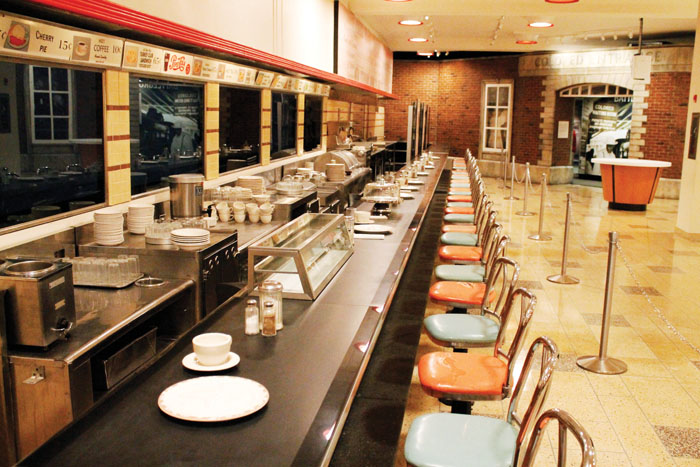 FILE - In this Sept. 16, 2016, file photo the F.W. Woolworth's lunch counter is seen at the International Civil Rights Center & Museum in Greensboro, N.C. The site is among about 130 locations in 14 states being promoted as part of the new U.S. Civil Rights Trail, which organizers hope will boost tourism in the region. (AP Photo/Skip Foreman, File)

BIRMINGHAM, Ala. — Southern states that once fought to maintain racial segregation are now banding together to promote civil rights tourism at sites including the building where the Confederacy was born and the motel where Dr. Martin Luther King Jr. died.

Fourteen states stretching from Kansas to Delaware, including North Carolina and all of the Deep South, are joining to promote the U.S. Civil Rights Trail, which will highlight about 130 sites linked to the modern civil rights movement. The joint effort was unveiled as part of the MLK holiday weekend.

Individual Southern states have used such promotions for years, beginning with a black history trail launched by Alabama in the 1980s, but never before have they joined together in a single push to bolster civil rights tourism, said Lee Sentell, a leader of the effort.

Most states participating in the promotion are part of the Atlanta-based Travel South USA, which is funded by state tourism agencies to lure visitors to the region. The organization has launched civilrightstrail.com and is placing advertisements in national magazines to promote the trail.

Landmarks on the trial include churches, courthouses, schools, businesses and other sites that played a role in the civil rights movement in the 1950s and ’60s, plus memorials and museums that document the period.

Delegates met in the white-domed building to form the Confederate States of America in 1861, and King spoke outside the building at the end of the Selma-to-Montgomery voting rights march in 1965. The trail also features the National Civil Rights Museum, located at the Lorraine Motel where King was assassinated in 1968 in Memphis, Tennessee, and the MLK National Historic Historic Site in Atlanta.

Other locations are less well-known, like schools in Topeka, Kansas, that were part of the Brown vs. Board of Education case that resulted in the U.S. Supreme Court decision outlawing segregated schools in 1954, or Howard High School of Technology, part of another desegregation case in Wilmington, Delaware.

The trail is the product of a suggestion made two years ago by then-National Park Service Director Jonathan Jarvis, who wanted historians to document surviving civil rights landmarks, Sentell said. Researchers at Georgia State University located 60 sites, and states added about 70 more.

Alabama, which was the site of racial violence and multiple civil rights protests in the early 1960s, has the most locations featured on the trail at 29.

That doesn’t include a new memorial to lynching victims scheduled to open later this year in Montgomery.

Sentell said the main goal of the trial is “to get tourists to cross state lines and to learn about things that happened in various cities.”

“If someone is going to Montgomery and Selma, and we want them to go to Jackson, Mississippi, to learn about the story there and go to the Mississippi Delta and then to Memphis,” he said.

European visitors are a primary target of the campaign, he said.

It’s unclear exactly how many tourists visit sites related to the civil rights movement each year, but as many as 1.2 million people paid for admission at locations which charge admission last year in 12 Southern states, Sentell said.