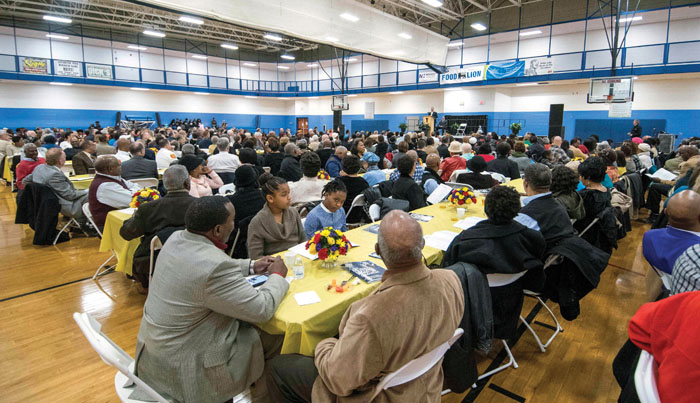 SALISBURY — For many in Salisbury, Martin Luther King Jr.’s birthday is about coming together. For years, the annual MLK breakfast, hosted by the Salisbury Human Relations Council, has drawn people of all ages, colors and creeds to sit down together and talk, face to face.

“We have a lot of different people from across the city coming together to pay honor to (Dr. King’s) legacy,” said Dennis Rivers, chairman of the Human Relations Council, during the breakfast Monday at J.F. Hurley YMCA.

The breakfast has been running for more than a decade and annually attracts as many as 400 people.

“This is like one of the great times of the year,” Rivers said.

Not only does the breakfast salute King with scripture, song and quotes from his life, but it allows people a chance to meet their neighbors, network and work together to solve local problems.

“It makes me feel really good knowing that so many people in the community care,” Rivers said.

It also ties off a weekend of celebration in honor of Martin Luther King Jr., which included a parade on Saturday and awards program Sunday.

Local ministers and faith leaders offered Jewish, Buddhist and Christian prayers for the community. Community leaders spoke briefly about the legacy of King.

King, he said, “shared a heritage of struggle” with other great African-Americans such as Rosa Parks, the Tuskegee Airmen and Jackie Robinson. They were people who fought against societal perceptions and barriers so that those who followed could be seen as equals. King followed in their footsteps, he said.

“He is, and ever will be, a hero,” Lattimore said. “He was a disciple of human freedom.”

Lattimore talked about he himself had been influenced by King.

“For me, Dr. King is like a shadow friend I never met,” he said.

His legacy inspired Lattimore to pursue his career — first in the military, then in the clergy. It was a path that eventually gave him an opportunity to introduce King’s widow, Coretta Scott King, at an event, a moment he remembers with humility and wonder.

King, Lattimore said, had “an irrepressible voice for reason” and a desire for knowledge and justice.

King’s work, he said, is not done. There is much to do in 2018. Society faces threats of violence, poverty, nuclear war, racial bias and interracial hatred, he said.

While debating issues of where universal rights begin, Lattimore said people should turn their eyes closer to home.

Others speakers, including Livingstone College President Jimmy R. Jenkins and Rowan County commissioners Chairman Greg Edds, encouraged those present to get involved in the community — to work together to build something shining.