Jirschele will return as Intimidators’ manager in 2018 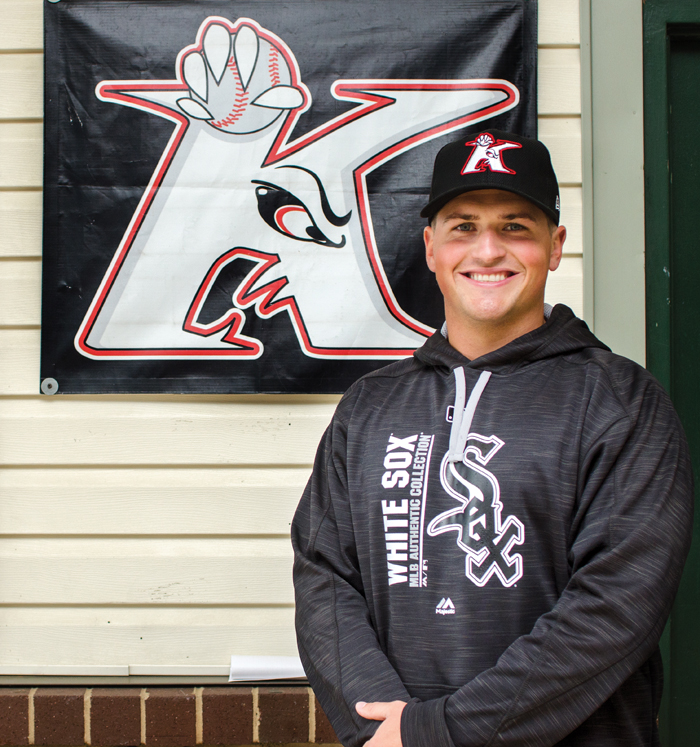 KRISTI CRAVEN/ SALISBURY POST Justin Jirschele returns as the manager of the Kannapolis Intimidators for the 2018 season.

KANNAPOLIS — The Chicago White Sox have announced that Justin Jirschele will return to a second season as manager of the Kannapolis Intimidators.

Joining Jirschele for the 2018 season in Kannapolis will be pitching coach José Bautista, hitting coach Jamie Dismuke, athletic trainer Joe Geck, and strength and conditioning coach Goldy Simmons.
Kannapolis Intimidators President Brian Radle says of the 2018 staff: “We are thrilled to welcome back Jirschele, Dimuke, Geck and Simmons, and have Bautista back with the Intimidators. It is obvious after the success of last season, that the talent coming through Kannapolis will be in phenomenal hands.”
As the youngest manager in minor league baseball, Jirschele’s 2017 efforts in Kannapolis didn’t go unnoticed. The White Sox named Jirschele as their Minor League Coach of the Year.

Jirschele began his coaching career in 2015, as the hitting coach of Advanced Rookie Great Falls and spent the 2016 campaign in the same role for the Intimidators.

Jirschele spent parts of four seasons in the White Sox minor league system as a player, batting .277 with 70 RBIs and 77 runs scored in 184 career games. He played 15
games with Kannapolis in 2013 before earning a promotion to Class A-Advanced Winston-Salem. He reached as high as AAA Charlotte in both 2014 and 2015, before beginning his coaching career.
Bautista returns to the Intimidators after spending the 2017 season as pitching coach in AA Birmingham and the 2016 season at Class A-Advanced Winston-Salem. He returns after having served has the Intimidators’ pitching coach from 2011-15.

This will be Bautista’s 11th season with the White Sox. Prior to that, he spent time in the Kansas City Royals’ organization. Signed by the Mets in 1981 he had a nine-year career in the Major Leagues with, Baltimore, the Cubs, San Francisco, Detroit and St. Louis. He went 32-42 with a 4.62 ERA and threes saves in 312 appearances.
Dismuke is back for his second season as the Intimidators hitting coach. He came to Kannapolis after two previous seasons as a hitting coach in the White Sox organization, both with AA Birmingham.

Dismuke spent 11 seasons as a coach in the Cincinnati Reds system and six seasons as a hitting coach in the Atlanta Braves organization before joining the White Sox. He played nine seasons (1989-1997) in the Major Leagues with Cincinnati, Detroit and Toronto, batting .277 with 94 home runs and 429 RBI in 793 career games.
Simmons also returns to Kannapolis as the team’s strength and conditioning coach. His third season on the White Sox player development staff, Simmons served as the strength and conditioning coach for Great Falls in 2016. He joined the organization in 2015 as the conditioning coach of the AZL White Sox after working at the University of California-San Diego in 2014. In two seasons as a pitcher in the White Sox organization, Simmons went
3-3 with a 4.97 ERA in 28 games between Advanced Rookie Bristol and Great Falls in 2009-10. He played college baseball at San Diego State for head coach Tony Gwynn.
Geck will serve as the head trainer for Kannapolis for his third straight season in 2018, his 26th season in the White Sox organization.
The Intimidators open the 2018 season on Thursday, April 5, at Intimidators Stadium
supported by Carolinas Healthcare System, against the Lakewood BlueClaws.

Season and group tickets are now available for the 2018 season. For more information, contact the F&M Bank Box Office at (704) 932-3267 or visit www.intimidatorsbaseball.com.