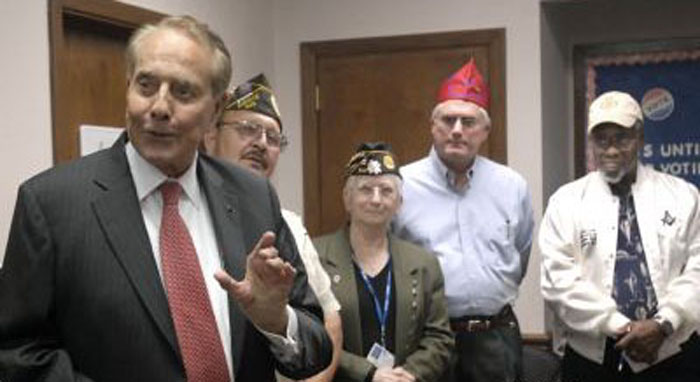 Bob Dole visits Salisbury in 2008 to campaign for his wife, Salisbury native Elizabeth Hanford Dole, who was a candidate for the Republican presidential nomination at the time.

Former U.S. Sen. Bob Dole has been known as a soldier, a legislator and a statesman.

And, locally, he has been known as the husband of Salisbury native Elizabeth Hanford Dole, also a former U.S. senator.

On Wednesday, Congress will thank Bob Dole for his many-faceted service to the country by presenting him with a Congressional Gold Medal, the nation’s highest civilian honor.

The 3 p.m. ceremony in the Rotunda of the U.S. Capitol will be streamed live at speaker.gov/live. CSPAN is scheduled to cover the ceremony and stream the proceedings on its website.

Leaders of the U.S. House and Senate are presenting the medal, with President Donald Trump and Vice President Mike Pence expected to attend.

Born on July 22, 1923, in Russell, Kansas, Dole left college in 1942 to enlist in the Army and serve in World War II, where he suffered devastating injuries while trying to help a fellow soldier. He was awarded two Purple Hearts and a Bronze Star for his service during the war.

He went on to represent the state of Kansas in Congress from 1961 until 1996 — eight years in the U.S. House of Representatives, followed by 27 years in the Senate. During his 35 years in Congress, Dole was a strong advocate for the disabled, prioritizing policy over partisanship to achieve significant Social Security reforms and advance the Americans With Disabilities Act.

Since his time in Congress, Sen. Dole has continued to serve the public, especially veterans.

While serving in Congress, he married Elizabeth Hanford, then serving on the Federal Trade Commission. That made the Kansan a favorite son of sorts in Salisbury.

Bob Dole will be only the eighth senator to receive the Congressional Gold Medal. Recipients include Harry Truman and Robert Kennedy, both honored posthumously, as well as Hubert Humphrey, John Glenn, Edward Brooke, Alben Barkley and Andrew Jackson.

Dole has been in declining health for some time. A family friend said the former Senate majority leader will speak briefly and Elizabeth Dole will carry on with his acceptance speech.

A single gold medal has been struck to honor Sen. Dole.