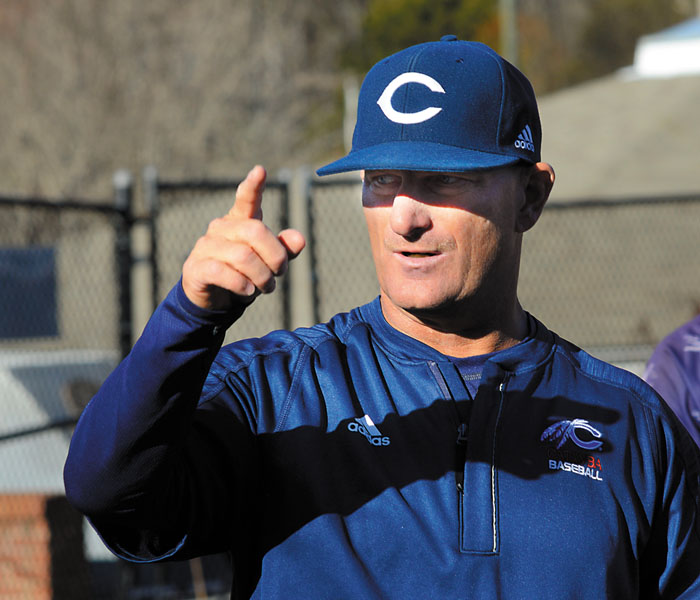 SALISBURY — On Feb.1, the Catawba Indians will open a new baseball season not far from the beaches of Fort Lauderdale.

That’s an ideal place to begin. The Indians will be playing four straight days in Florida. The temperature is expected to be in the 60s.

Catawba gets to open another season in style because of the First Pitch Dinner. That fundraiser will be held on Saturday, Jan. 27, in Peeler Crystal Lounge in the Robertson College-Community Center on the Catawba campus. Cocktail Hour begins at 5:30 p.m., with the dinner and speaker to follow at 6:30 p.m. Tickets are $75.

All proceeds from the dinner will be used to enhance this season’s Catawba baseball team.

“The First Pitch Dinner raises money that goes into these road trips,” Catawba coach Jim Gantt said. “Things like this Florida trip are a recruiting advantage for us. If you come to Catawba, you’ll play home games at Newman Park and you’ll take a nice bus to all the road games. And we’re not just eating bologna sandwiches at rest stops now, we eat a lot of meals at restaurants. The First Pitch Dinner also provides so many improvements for our program. In the past year we’ve added a new infield groomer, a new pitching machine and a roll-up portable batting cage. Those throwback uniforms we wore last year were possible because of the First Pitch Dinner.”

The keynote speaker for the First Pitch Dinner will be Roy Silver. If that name doesn’t ring a bell it’s because his playing, coaching and managerial careers were spent in the minor leagues.

Silver’s official title now is special assistant in player development for the Texas Rangers. Basically, he’s a roving life coach, who gets athletes straightened out off the field, so they can contribute on the field.  Outfielder Josh Hamilton and pitcher Matt Bush, two guys who were the first pick in MBL drafts, but then were out of the game completely due to addictions, owe a lot to Silver. He’ll share those stories, including wearing catching equipment and receiving Bush’s 95 mph fastballs in the Golden Corral parking lot where Bush was employed after being released from prison.

Former Catawba stars Jerry Sands, who has played several seasons in the majors, and Craig Brooks, a hard-throwing relief pitcher who reached Double A last season in the Chicago Cubs organization, are expected to be present. In 131 minor league innings, Brooks has fanned 182 batters. He’s 7-2 with 17 saves.

Baseball continues to be the steadiest winner of all of Catawba’s sports programs. Gantt is 757-384 in his 21 seasons as head coach. He’s been South Atlantic Conference Coach of the Year nine times and region coach of the year twice.  Catawba was 40-17 in 2017.

Gantt uses the word “unique” to describe Catawba’s 2018 team. The roster may be more versatile than it’s even been. Several players could see action in the infield as well as the outfield — in the same game. SAC Player of the Year, SAC Male Athlete of the Year and All-American Luke Setzer is expected to catch quite a bit this season in addition to his normal duties in the outfield.

Pitchers also will be asked to be versatile.

“You’re probably going to see Connor Johnson as a closer for an inning on Friday and as the starter for the seven-inning game on Saturday,” Gantt said. “And you’re going to see some of our pitchers who are fast (Michael Elwell and Caleb Link) used as pinch-runners.”

The biggest losses from last season are closer Bryan Blanton and slugging catcher Zac Almond, a pair of draft picks. Catawba also will miss the bats of Malachi Hanes and Bryce Fowler and the experience and left arm of Russ Weiker, who is now an assistant coach. Catawba encountered an unexpected setback when smooth-fielding shortstop Jeremy Simpson was lost for the season with labrum surgery.

Closer, shortstop and catcher are questions that will have to be answered, but a lineup, anchored by Setzer, gold glove first baseman Chance Bowden and Kyle Smith should be productive. Star pitcher Hunter Shepherd is likely to get a lot of DH at-bats.

Jacob Nester had won the second base job, but the former utility man now will take over at shortstop, replacing Simpson. That means talented freshman Joe Butts (North Davidson) will be the second baseman when the season begins. Other key newcomers are transfers Jason Curtis (Appalachian State) and Lee Poteat (St. Andrews).

Catawba welcomes back pitchers Riley Myers and D.J. Laxton from the injured list, as well as outfielder Harrison Baucom, who suffered a broken jaw in an intra-squad game last year when he was hit by a throw as he slid into third base.

“Sometimes guys will shy away from inside pitches after they have an injury to their face like that, but he’s standing right in there,” Gantt said. “He’s not afraid.”

Catawba’s roster includes 15 athletes who played for Gantt’s Rowan County American Legion teams. Gantt nominates one of them as the surprise of the year.

“Caleb Link (who didn’t pitch much in high school at West Rowan) has unbelievable stuff on the mound,” Gantt said. “His fastball is moving 2 feet.”

Besides getting a lot of Rowan players (East’s Hayden Setzer will be coming next year), Gantt always has been able to attract good players from Cabarrus, Davidson, Stanly, Iredell and Randolph counties to Catawba.

Another successful First Pitch Dinner will help Catawba continue to operate a first-class program that is among the best in Division II.

For more information about registering for the First Pitch Dinner, see gocatawbaindians.com