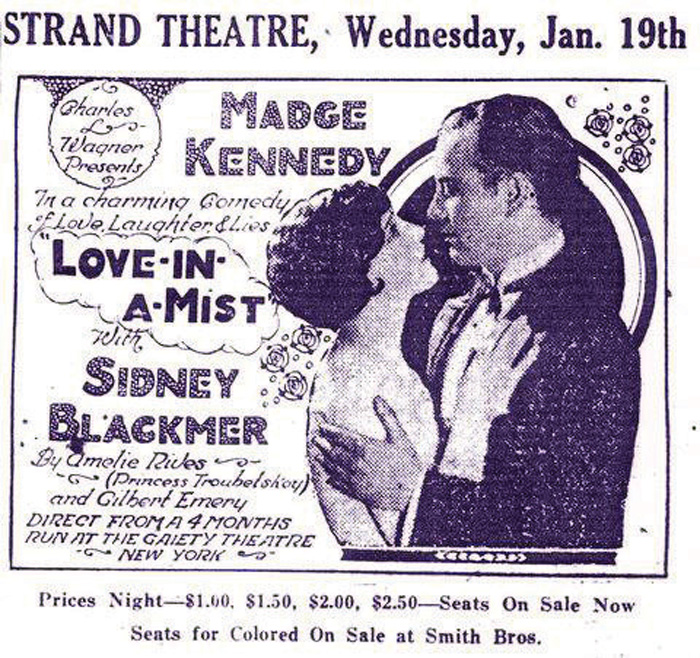 Mike Cline of Salisbury provided this reproduction of a Salisbury Post advertisement from Jan. 19, 1927, about the motion picture ‘Love in a Mist’ showing at The Strand Theatre. The ‘charming comedy of love, laughter & lies’ starred Madge Kennedy and Salisbury actor Sidney Blackmer. As the advertisement further describes, it was ‘direct from a 4 months run at the Gaiety Theatre’ in New York. Note that the prices ranged from $1 to $2.50, and tickets for African Americans were sold separately at Smith Brothers. The Strand was the movie house name for what is today known as the Piedmont Players’ Meroney Theater on South Main Street. Born and raised in Salisbury, Blackmer was a Tony Award-winning actor who appeared in what seems like countless stage, movie and television productions. He had the distinction of playing Teddy Roosevelt in seven movies. Biographies often mention that more modern moviegoers might remember best his role as the warlock/coven leader Roman Castevet in ‘Rosemary’s Baby’ in 1968. Blackmer was honored with a motion picture star on the Hollywood Walk of Fame on Vine Street. He died in New York on Oct. 6, 1973, at the age of 78. He was buried in Salisbury’s Chestnut Hill Cemetery.