‘The last frontier will be the heart’: MLK program provides marching orders to the community 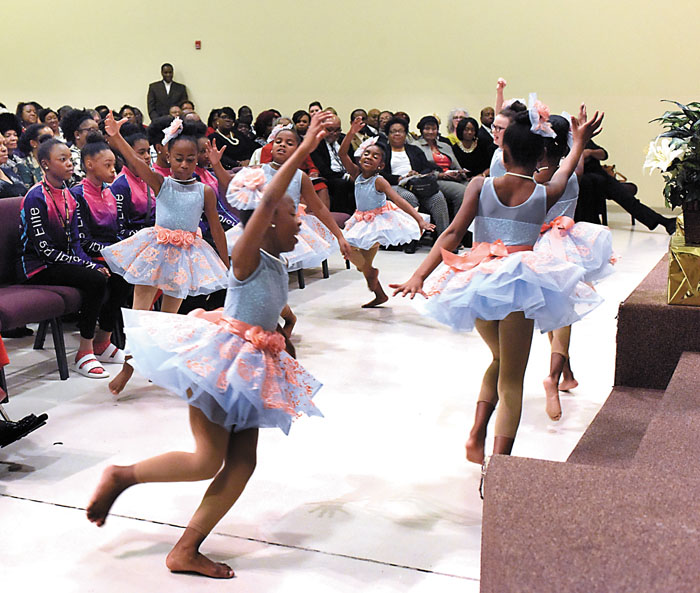 For their homework, Morton asked the crowd to work toward peace and equality by embracing the kinds of hope, morality, love and non-violent direct action practiced by Dr. Martin Luther King Jr. in his lifetime.

Morton also encouraged members of the audience to go forth, accepting the mortality of King and recognizing “he was a human like you and I” — flawed, but capable of achieving great things.

And Morton asked them to embrace, sustain and build on the hope that the black American dream is attainable, call out hypocrisies, work and sacrifice for a better world, step out of their comfort zones, hold themselves and others accountable and set measurable goals.

“The Kings we are looking for in today’s time are you,” said Morton, guest speaker at the 41st annual Martin Luther King Humanitarian Awards program at Mount Zion Missionary Baptist Church.

Besides the presentation of four 2018 Humanitarian Service Awards and a scholarship, Sunday afternoon’s program was filled with strong and inspirational music, words, dance and proclamations from many speakers.

King, the slain civil rights leader for whom the national holiday is being held today, was central to all the messages.

Vergel Lattimore, president of Hood Theological Seminary, said after all the struggles, laws and policies aimed at fostering equality and stopping injustice — in the past and in the future — it ultimately will come down to one thing within everybody.

“The last frontier,” Lattimore said, “will be the heart.”

Lattimore encouraged the crowd to be ambassadors in the changing of hearts.

Greg Edds, chairman of the Rowan County Board of Commissioners, said King instructed the country that injustice anywhere is injustice everywhere and that with God’s gifts come responsibility, character, courage and compassion.

Dr. Jimmy Jenkins, president of Livingstone College, said King knew that if you find the truth, it will set you free. King loved peace, justice and equality, and he recognized the stances he took in trying to achieve those things were difficult, but he didn’t back down, Jenkins added.

Several speakers spoke of things that had transpired in the country and county since last year’s King program at this same church.

East Spencer Mayor Barbara Mallett recalled one of the things King said was “give us the ballot box,” and in November in Rowan County the framework of local government changed to a degree.

The election showed that dignity and freedom come not only from those who dream, but also from those who vote, Mallett said. Through the ballot box, she added, things can continue to change.

Heggins said he was “a living witness that dreams do come true.”

Catawba College President Brien Lewis said the nation over the past year had witnessed deeply troubling events that implied or supported white supremacy — things that have to be impugned and repudiated.

“It should go without saying,” Lewis said.

Salisbury Mayor Pro Tem David Post noted that King in his time had become the nation’s moral compass, but he said today’s national discourse is going in the wrong direction. King’s beliefs that peace on earth must transcend everything and that people must have a world perspective carry more meaning now than ever.

Many of the speakers who represented local governments also carried with them proclamations celebrating today as Dr. Martin Luther King Jr. Day in their jurisdictions. Post noted that King’s holiday is considered a National Day of Service, and serving the community on this holiday is one of the best ways to honor King.

As did many of the other speakers, N.C. Rep. Carl Ford, R-Rowan, quoted a passage from the Bible, and his was familiar — “love thy neighbor.” The continuance of that Scripture from Matthew is “hate thy enemy,” Ford noted, and he identified that enemy as Satan.

One other takeaway Morton gave his audience was his belief that pseudo scholars often focus on King’s dream without mentioning that King himself saw his dream turning into a nightmare, given the violence against blacks and the poverty they were enduring.

“Hope is that quality that allows you to go on,” Morton said.

Other speakers Sunday included Susan Cox, a member of the Rowan-Salisbury Board of Education; Gemale Black, president of the Salisbury-Rowan NAACP; and Zack Kyle, assistant city manager for Salisbury.

Colors were presented by members of the Salisbury Police Department Honor Guard, and members of J.C. Price American Legion Post No. 107 led the Pledge of Allegiance.

• Latasha Wilks, president of the Let’s Lend a Helping Hand organization and for her overall community involvement through initiatives such as Team-Up Tuesdays. Her actions have helped children, seniors and the homeless. Wilks is a minister at Mount Zion Missionary Baptist and was a candidate in the past Salisbury City Council election.

• Al Heggins, mayor of Salisbury. Heggins could not attend Sunday’s program because of a commitment in High Point. In December, she was sworn in as Salisbury’s first African American woman mayor.

• Tsunami Development Literacy Program. This free, copyrighted program is available to all local children in the third, fourth and fifth grades. Executive Director Ella Wood said Tsunami, housed at the county-owned West End Plaza, takes children wherever they are in reading and moves them forward.

• Food for Thought provides food security for needy children in the public schools, providing backpacks of food distributed to them for the weekends at home. “What a great way to help children,” presenter Dixie Dalton said of the program now touching 600-plus students.

Davis-Robusky is a 2017 North Rowan High graduate who is attending N.C. Central University in Durham. He grew up at Mount Zion Church.