Other Voices: Why focus on marijuana now? 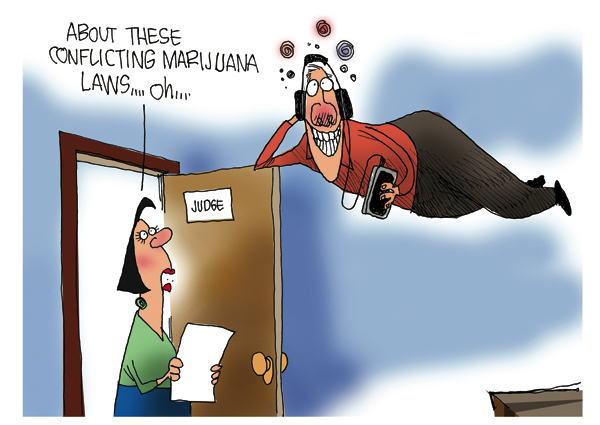 The U.S. is in the middle of an opioid epidemic.

According to the U.S. Centers for Disease Control and Prevention, from 2014 to 2015, overdose-related deaths from one opioid alone, heroin, increased by 20.6 percent, with nearly 13,000 people dying in 2015.

Meanwhile, there remain no known marijuana overdose deaths, according to the Drug Enforcement Administration, and studies have found states that have legalized marijuana have seen a decrease in opioid-related deaths.

So, of course, U.S. Attorney General Jeff Sessions has decided to ramp up the fight against — legal marijuana.

Recently, Sessions rescinded the Obama administration’s relatively hands-off policy toward states that have legalized marijuana for either medical or recreational use. Federal prosecutors where marijuana is legal under state law will now be free to decide for themselves how aggressively to enforce federal laws.

The Justice Department doesn’t have the resources to truly crack down on marijuana in states where they have no state and local support. But it doesn’t necessarily need them.

The main effect of Sessions’ action is to cause uncertainty, which will disrupt the newly burgeoning legal pot markets in states like Colorado and California. The prospect of an aggressive federal prosecutor swooping in isn’t just a threat to marijuana businesses, but also anyone who does business with them, such as financial institutions or landlords.

Not coincidentally, Sessions also opposes reforming civil asset forfeiture, which allows the government to seize the property of the accused even before they’re convicted of a crime — and makes it difficult and sometimes impossible  for those found not guilty to get their property back. A landlord renting to a marijuana-related business might well have his rental property seized by the feds, should a federal attorney emboldened by Sessions’ renewed anti-marijuana crusade be inclined to press the issue.

Disrupting marijuana businesses is exactly what Sessions intends. He may lack the resources to carry on a full-scale drug war without state and local cooperation, but he can create chaos.

Why would Sessions do this? He is proudly stuck in the past and claims marijuana is “only slightly less awful” than drugs like heroin.

“I realize this may be an unfashionable belief in a time of growing tolerance of drug use. But too many lives are at stake to worry about being fashionable. I reject the idea that America will be a better place if marijuana is sold in every corner store. And I am astonished to hear people suggest that we can solve our heroin crisis by legalizing marijuana — so people can trade one life-wrecking dependency for another that’s only slightly less awful,” Sessions said last year.

Senators in both parties spoke out against the action. A bill in the Senate, S.1689, the Marijuana Justice Act, would end marijuana prohibition at the federal level and turn it over to the states.

Sessions may embrace federalism only when it suits his fancy, but the Senate should embrace it here and leave the war on marijuana up to the states that still choose to wage it, and not force it upon those that don’t.