King: Fighting a sense of ‘nobodiness’ 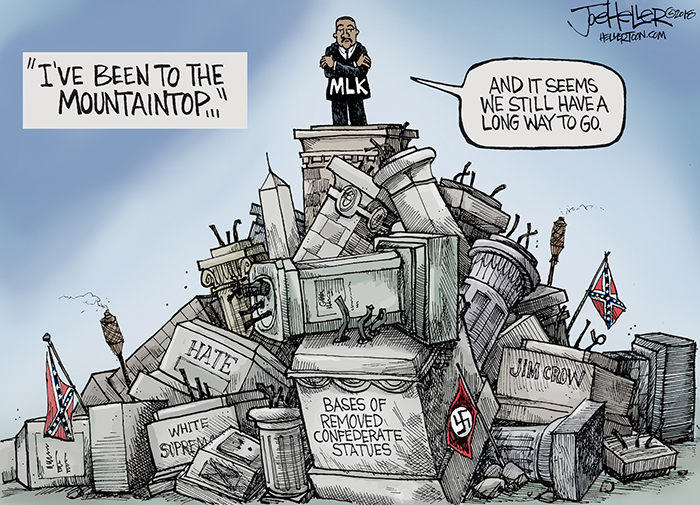 From Dr. Martin Luther King Jr.’s “Letter from a Birmingham Jail,” written in 1963:

We have waited for more than 340 years for our constitutional and God given rights. The nations of Asia and Africa are moving with jetlike speed toward gaining political independence, but we still creep at horse and buggy pace toward gaining a cup of coffee at a lunch counter. Perhaps it is easy for those who have never felt the stinging darts of segregation to say, “Wait.” But when you have seen vicious mobs lynch your mothers and fathers at will and drown your sisters and brothers at whim; when you have seen hate filled policemen curse, kick and even kill your black brothers and sisters; when you see the vast majority of your twenty million Negro brothers smothering in an airtight cage of poverty in the midst of an affluent society; when you suddenly find your tongue twisted and your speech stammering as you seek to explain to your six year old daughter why she can’t go to the public amusement park that has just been advertised on television, and see tears welling up in her eyes when she is told that Funtown is closed to colored children, and see ominous clouds of inferiority beginning to form in her little mental sky, and see her beginning to distort her personality by developing an unconscious bitterness toward white people; when you have to concoct an answer for a five year old son who is asking: “Daddy, why do white people treat colored people so mean?”; when you take a cross county drive and find it necessary to sleep night after night in the uncomfortable corners of your automobile because no motel will accept you; when you are humiliated day in and day out by nagging signs reading “white” and “colored”; when your first name becomes “nigger,” your middle name becomes “boy” (however old you are) and your last name becomes “John,” and your wife and mother are never given the respected title “Mrs.”; when you are harried by day and haunted by night by the fact that you are a Negro, living constantly at tiptoe stance, never quite knowing what to expect next, and are plagued with inner fears and outer resentments; when you are forever fighting a degenerating sense of “nobodiness”–then you will understand why we find it difficult to wait. There comes a time when the cup of endurance runs over, and men are no longer willing to be plunged into the abyss of despair. I hope, sirs, you can understand our legitimate and unavoidable impatience. You express a great deal of anxiety over our willingness to break laws. This is certainly a legitimate concern. Since we so diligently urge people to obey the Supreme Court’s decision of 1954 outlawing segregation in the public schools, at first glance it may seem rather paradoxical for us consciously to break laws. One may well ask: “How can you advocate breaking some laws and obeying others?” The answer lies in the fact that there are two types of laws: just and unjust. I would be the first to advocate obeying just laws. One has not only a legal but a moral responsibility to obey just laws. Conversely, one has a moral responsibility to disobey unjust laws. I would agree with St. Augustine that “an unjust law is no law at all.”