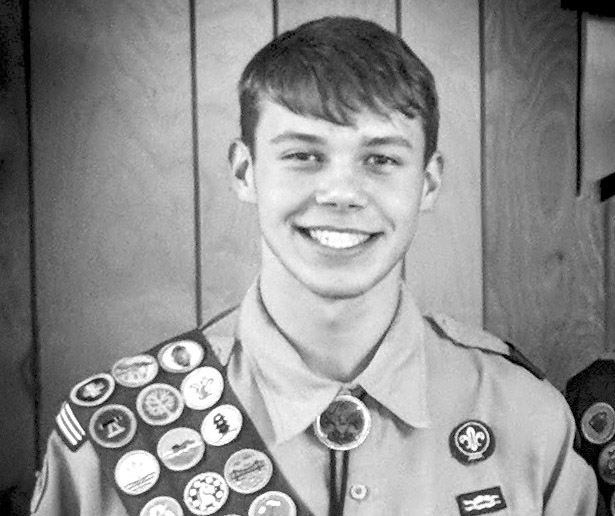 Garrison started his journey in the scouting program as a first grader at Shiloh United Methodist Church in Faith in 2006. During 2007, Kelly, his father and Chad Harrington began a new Pack at Rock Grove United Methodist Church. Kelly maintained the position of Cubmaster through Garrison’s Cubscout years. Garrison crossed over during his Arrow of Light Ceremony to a new Boy Scout program at Rock Grove in 2011 under Chad as Scoutmaster. Garrison has served as webmaster, bugler, quartermaster, Senior Patrol Leader, Assistant Senior Patrol Leader and currently Junior Assistant Scout Master during his time with Troop 324. He has been dedicated to Scouting for over 11 years. Garrison’s Eagle Scout project consisted of constructing a monument of Veterans from his home church at Mount Hope. He researched all past and current members to honor their service to our country. As of right now, there are 87 names on the monument including his two great-grandfathers who served in World War II. Caesar C. Basinger served in the Navy and Jack L. McSwain served in the Army. Along with obtaining the Rank of Eagle Scout, Garrison has completed the P.R.A.Y. series which includes God and Me, God and Family, and God and Church, and God and Life. Garrison is a member of Order of the Arrow, a member of the National Eagle Association, and a member of the Venturing Scout Program at Rock Grove United Methodist Church.

A senior at Jesse C. Carson High School, Garrison is the son of Kelly and Lori Seitz.