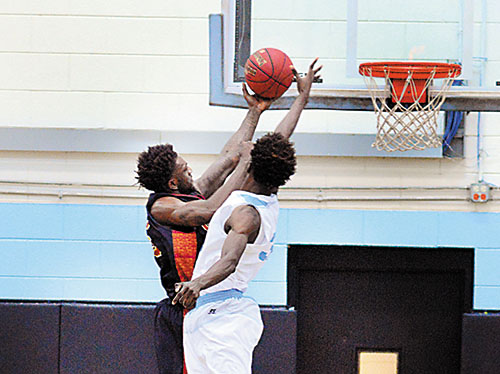 Livingstone's Navar Elmore (32) tries to block Savon Goodman's shot at the basket. Photo by Wayne Hinshaw, for the Salisbury Post

SALISBURY — Two steps forward and one step back.

“It was a good week overall,” coach James Stinson said after the Blue Bears (5-7, 3-3 CIAA) dropped their Southern Division opener. “But there’s disappointment because this was a division game. And to lose at home, that was critical. It’s almost like a death sentence.”

Perhaps, but there were no vultures circling overhead after Shaw (10-6, 4-2, 1-0) riddled LC with 61 percent shooting from the field. The guests were led by Arizona State transfer Savon Goodman, a 6-foot-6 forward who spent the better part of 40 minutes leveling everything and everyone in his path. He shot 12-for-17 from the floor, paced all scorers with 29 points, snatched 11 rebounds and made four steals.

Shaw placed five scorers in double figures and opened double-digit leads in each half. The Bears used Goodman’s three-point play and subsequent dribble-drive layup to mount a 35-22 edge with 5:38 remaining in the first half. And they got an over-and-under, scoop layup from senior guard Khaliq Williams to go ahead 72-60 with 6:03 to play. In between, the Blue Bears put up a courageous, all-hands-on-deck fight.

“We had the lead, but couldn’t hang on,” said Livingstone’s Cameron Burhannon. “We’ve just got to hold it together until the game is over. We can’t let up.”

Livingstone never led until 5-10 sophomore Roger Ray pump-faked and drained a 3-pointer from the right side, capping a 9-0 LC run and providing a 54-53 lead with 13:36 to go.

“The paint is always loaded now when I get the ball,” Ray said after hitting four 3-balls and finishing with 18 points. “I can’t get to the basket. On that one, the shot clock was running down so I had to make something happen.”

Shaw responded by denying the Blue Bears any baskets for the next five-and-a-half minutes. Goodman finished an 11-2 spree when he took a no-look pass from teammate DeAngelo Stephens-Bell and scored on a major-league jam — giving SU an eight-point lead with 9:15 on the clock.

“I knew that was coming,” Goodman said. “I had just gotten on his butt two minutes beforehand, when we ran the same play and turned it over. I told him, ‘Next time just make the easy pass,’ which in that situation was a bounce pass right to me.”

“He could rebound, he could score and he could get to the basket,” said Lydell Elmore, Livingstone’s top rebounder with seven. “We could have done better against him. As a team, we needed more effort to win.”

Ray agreed that Livingstone’s chief concern was on defense.

“No, we didn’t execute defensively,” he lamented. “We pressed up on a lot of guards that weren’t even looking to shoot the ball. All they wanted to do was attack the basket and get it to Goodman. We played right into their hands.”

Livingstone spent the last six minutes pushing forward. It drew as close as 75-69 when Lydell Elmore took a feed from McNeill and dunked with 2:50 remaining.

“That team has a lot of fight in them,” Goodman said, pointing toward the LC locker room. “We came in here expecting a dogfight and they gave us one. I’m just happy we won. From here on it’s about deciding if you want to play for a ring or if you want stats. Seems like we want a ring.”

So do the Blue Bears, but that entails six more weeks of stepping forward.

NOTES: Livingstone shot a respectable 46 percent from the field, buried 11 3-pointers and out-rebounded Shaw, 33-32. The guests were 8-for-14 on three-point attempts. … Burhannon went 5-for-9 from the field and contributed 14 points and four assists. … The Blue Bears are idle until next Saturday when they visit Fayetteville State. They return home Jan. 27 against St. Augustine’s.