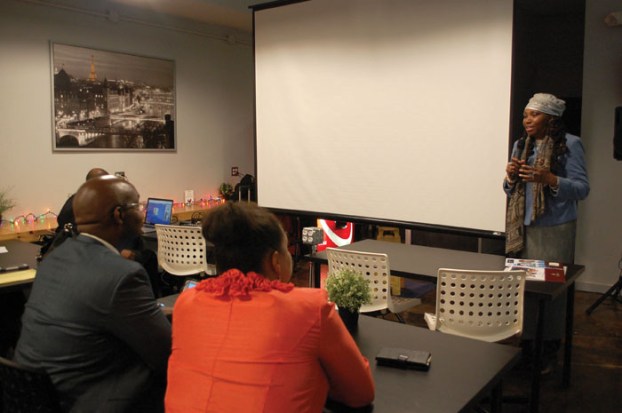 SALISBURY — At the beginning of every financial literacy meeting, Certified Financial Educator Robin “R.J.” Whitehurst asks attendees to introduce themselves and say what their financial goals are.

“What is wealth?” Whitehurst asked them at their Dec. 28 meeting. “It’s more than just about money.”

Whitehurst and her partner, former East Spencer mayor Kenneth Muhammad El, said in a separate interview that their goal in holding the financial literacy meetings is to help people move away from wanting to be temporarily “rich” and toward wanting to be wealthy in the long-term.

“The mindset has to shift. That’s the first thing,” Whitehurst said. “Financial literacy is really on two fronts. It’s to teach the information, the knowledge of how money works. But it’s also the behavior modification. And the thinking, the mindset, so that the saving continues.”

Whitehurst said that, especially in high poverty areas, people associate being wealthy with being able to buy things, like cars and homes. But she said that is a “backwards” way to think about it because houses and cars usually require regular payments.

“You think they’re an asset … (but) if it’s something that’s taking money out of your household, it’s a liability,” Whitehurst said.

She said that actual assets are things that bring money into your house, like life insurance.

“When we talk about households, what creates generational wealth is, for the most part, life insurance in this country,” Whitehurst said. “But when you have three, four, five generations of poor people, of black and brown underserved communities who don’t know anything about that, every baby that is born comes in at ground zero.”

Whitehurst said that through the financial literacy meetings — held every Wednesday at 7 p.m. in various locations — she and Muhammad El are hoping to teach households what effectively saving money can do for them.

“Wealthy people are in the habit of enjoying saving money and the accomplishment of seeing accumulation, where not-wealthy people are in the habit of spending and in the enjoyment of immediate gratification,” Whitehurst said. “… So the impetus is when we know better, we do better. And we must get into the households and teach them the fundamentals of how to do better.”

Muhammad El, who grew up in East Spencer, has been leading a group called Boots on the Ground for approximately three years. He said the purpose of the group is to stop violence in Rowan County.

But he said that, until he met Robin last year, the group had been focusing on reaching households by knocking on their doors.

Muhammad El and Whitehurst think that, if households can learn to generate their own wealth, it could take them out of a cycle of poverty and, potentially, violence.

“And that’s not going to necessarily impact the community for a long time, but it’s going to impact your household immediately,” Whitehurst said.

Whitehurst said that she is aware of Muhammad El’s criminal history, which involved alleged mail and wire fraud during Muhammad El’s — then Kenneth Fox’s — term as mayor of East Spencer.

“He doesn’t give any financial advice. He mostly brings people into the room,” Whitehurst said. “…And realizing, having come into this situation, with understanding how people may feel about what occurred or didn’t occur and his innocence, I have to come in and look at what the need is. And that’s what we all are doing.”

Muhammad El said that he is innocent and that he pled guilty to the crime because his family had been suffering through a five-year investigation. He spent 30 months in a federal facility.

“And I don’t want a second chance because I didn’t do anything wrong. So I’m just continuing my first chance,” Muhammad El said.

The meetings are usually led by Whitehurst and, in addition to teaching basic financial knowledge, Whitehurst frequently mentions innovative companies that have the potential to give attendees high returns on their investments.

Some of those companies include CalChoice Financial, Transamerica and All Wealth Financial Group.