Every day is a blessing: ‘If I didn’t know I have cancer, I wouldn’t know,’ says Julie Carr 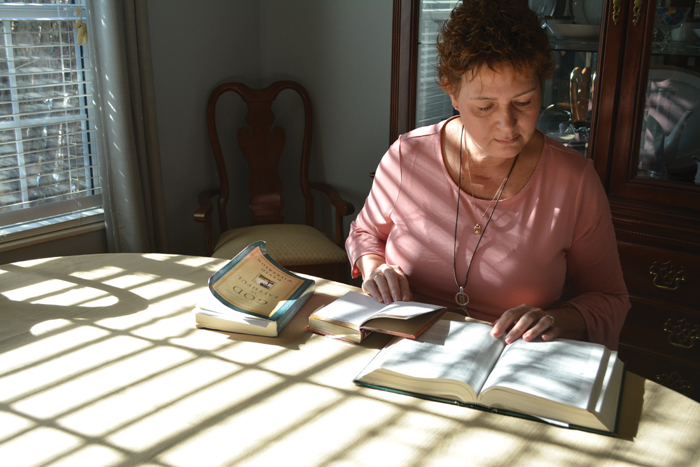 Julie spends part of each day reading devotions and the Bible — something she did even before her diagnosis.

Every morning, between 4 and 6 a.m., Julie Carr takes a pill from a bottle that sits on her bedside table. A couple hours later, she gets up and starts her day, taking son Dawson to kindergarten at St. John’s, reading her devotions, running errands.

She feels great and she looks great. But Julie is living with stage 4 lung cancer.

Julie, a non-smoker, was diagnosed with stage 3A adenocarcinoma of the lung in September 2016. On June 2, 2017, Gerry Blair — her father and a lifetime smoker — died of the same disease. He had been diagnosed in April.

“I’d planned a trip home to be there for his sixth week of treatment,” Julie says, “but he elected not to fight. He never wanted to be a burden. He pretty much let go.”

Deciding to be proactive, her two sisters, Renee Vraa, 45, and Leslie Blair, 36, both of whom live in Minnesota, decided to have CT scans of their lungs. Leslie was clear, but Renee was diagnosed with multifocal adenocarcinoma. It has not yet been staged, but is confined to the lung. Renee is recovering from December surgery to remove two spots on her lung, and is awaiting a treatment plan.

In her research, Julie has learned that some 10 percent to 15 percent of lung cancer cases are non-smokers — yet there’s less funding for lung cancer than other cancers, even though it’s more deadly than breast, colon or prostate cancer. Rowan County ranks highly among North Carolina counties as far lung cancer cases. She hopes to create awareness about lung cancer — and more funding for research. She and her family will also determine if their cancer is genetic, environmental, or a combination of the two.

Julie was working as a nurse at Novant Health Rowan Medical Center in the fall of 2016 when she experienced intense neck and shoulder pain one day at work.

“I know I carry stress in my shoulders, but this was different,” Julie says.

Her co-workers encouraged her to go down to the Emergency Department. She had a complete cardiac work-up, which was negative, but a routine chest X-ray showed a small spot on the lower lobe of her left lung.

“I was a little concerned,” Julie says.

A second X-ray was inconclusive. But Julie was young, a non-smoker, and a low-risk patient. Her provider encouraged her to wait for six months and get another X-ray.

“I was not willing to wait six months,” Julie says, “so I asked for a CT scan — just to figure out what it was.”

Hiding in the upper lobe of her right lung, behind her breastbone, was a tumor.

“I was amazed,” Julie says. “I feel this questionable spot in the lower left lung was there to make us take this path of discovery.”

A biopsy revealed cancer. Dr. Neil Patel gave Julie her official diagnosis, and she met a thoracic surgeon at Duke with a plan to remove the upper right lobe. Julie underwent chemo to shrink the tumor. There was a lymph node in her neck that kept “lighting up” with a PET scan, but her surgeon was not worried about it. Julie was set to have surgery on Jan. 27, 2017.

Before she went to Duke, she was dizzy and lightheaded. She consulted with her surgeon, who consented to a second MRI of her brain. The first had been clear. The day before surgery, the MRI revealed a pea-sized brain lesion. Surgery was off the table.

“It was overwhelming and unbelievable,” Julie says of hearing those words. “You start to question why. I’ve always had a deep faith that God would heal me, but I never imagined it would get this far.”

Julie and her husband, David, stayed in Durham that night to meet with the surgeons the next morning — not for surgery, but to develop a plan of action.

“We had a sleepless night,” Julie admits. “This is a death sentence. There was a lot of tearfulness, and we wanted answers. But underlying that was this trust in God that I would be healed. My doctors have never spewed statistics. They’ve always remained positive in dealing with things that come up.”

Julie spent six weeks taking chemo and radiation to treat the cancerous lymph node in her neck. She stayed at Caring House in Durham from February to March and tolerated treatment well. Her mom, Teresa Gowda, came from her native Minnesota to stay with her. In April, Julie began a regiment of Tarceva, an oral chemo pill. She’s doing well. She’s also had four lesions “blasted” from her brain via stereotactic surgery.

“I basically have five holes in my head, in addition to the ones God gave me,” she quips.

Every three months, she returns to Duke for a CT scan of her chest and an MRI of her brain.

Because of her diagnosis, Julie automatically qualified for disability.

“This is my new reality,” she says. “My job is to get better, to be the best I can be physically, spiritually and emotionally. I am spending precious time making memories with Dawson.”

At age 40, Julie decided to go to nursing school. She had spent her career in newspaper advertising sales, both at the Myrtle Beach Sun and the Charlotte Observer’s Concord bureau. She and David had also endured infertility treatments, and she didn’t want to try any more.

At a church retreat, she clearly heard someone call her “Mom” one night. She took that as a sign that she may not be a mother, but she could mother others — hence the desire to become a nurse. She and David dropped the maternity coverage on their insurance because it was so expensive. You know what happened next.

Julie got pregnant her second semester in nursing school. She was 42.

“I feel that God rewarded us for our obedience,” Julie says.

Julie never planned to remarry. In September 2001, she was out one night celebrating her divorce with girlfriends at Bimini’s Oyster Bar in Myrtle Beach. In walked David with a group of golf buddies. The place was packed.

One of her girlfriends told the guys, “Y’all can sit with us.”

“I had been divorced for a couple of years,” David notes. “I had worked through everything and was ready to date. I pursued her. I knew she was a good helpmate for me — to complement my life and challenge me in ways I needed to be challenged.”

Because David’s son Zach lived in Salisbury, Julie put her house on the market and moved to Salisbury. The two married June 7, 2003. Because Julie was Lutheran, they joined St. John’s Lutheran Church and quickly found a place in the contemporary service, at the time known as Center Celebration.

“I don’t know how people who don’t have Christ and a community of faith to support them do it in crisis situations,” David says. “Members of our small groups have taken Julie to doctors’ appointments. All of the church members have sent cards, brought meals and prayed for us and with us. The cool thing about it is that fellow members who have been in crisis themselves have also sent cards and prayed.”

David reached out to Eva White, herself a longtime stage 4 colon cancer survivor.

“Our church family has been phenomenal,” David says. “The hard part for me is trying to be the rock for Julie, and being the soft place to fall, too. I try not to show my concern.”

They’re dealing with cancer, but they’re also living their lives. Julie is taking David to Mexico for his 50th birthday this year.

“We really are making the most of life,” Julie says. “This has definitely deepened my faith, and opened my eyes to how closely God walks with me and how closely he desires to walk with all of us.”

Julie continues her daily devotion reading. She was a longtime member of her church’s Monday Night Bible Study until Dawson came along. But the ladies in that group continue to be a huge support to her.

“Julie is stronger than anybody I’ve ever met,” David says. “That was part of what God planned for me. She has helped me grow, and strengthened my own walk with Christ. God knew what was coming and where we were going.”

Between running errands, paying bills and buying groceries while Dawson is at school, Julie doesn’t have a lot of down time.

“I feel really good,” she says. “Dawson and I play a lot in the afternoons.”

Dawson says his favorite thing to do with his mom is when she buys him toys. A typical 6-year-old response.

Soon after Julie began her nursing career, David was out of work for 14 months. David, whose career is in food service, now has a job he loves.

“That’s all part of God’s time and God’s provenance,” Julie says. “It’s hard to say I’m thankful for cancer. That’s stupid. But there’s so much good that’s come from the past year.”

Julie and David know that God is in control, but Julie admits she is overwhelmed at times.

“Every step of this journey, I’ve had peace. I feel that God will heal me. I pray it is on this side of heaven, but he may take me home. Dawson has been my unexpected gift and joy. I just can’t fathom a God who would allow him to lose his mother. But there is a peace about this. Dawson doesn’t belong to me anyway. He’s on loan to me.”

Which is why every day with him — and with David — is such a blessing to Julie.