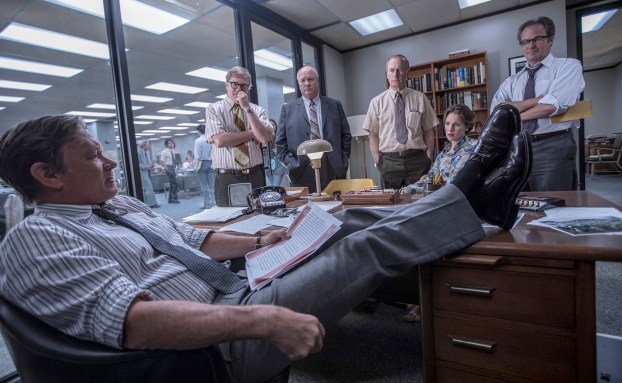 Tears welled up in my eyes as the credits rolled on “The Post” Saturday afternoon.

The movie tells the story behind The Washington Post’s 1971 decision to publish the Pentagon papers, even though a judge had already halted The New York Times’ publication of the report. The Post picked up where The Times left off, then attorneys for both papers wound up arguing the case before the Supreme Court.

The newspapers’ stories revealed how president after president, Democrats and Republicans, had lied to the American people about our country’s doomed role in the Vietnam War.

Movie screenplays spice up history, but the journalistic push for the truth depicted in “The Post” — and Publisher Katharine Graham’s courageous decision to risk everything in that pursuit — is authentic.

The Washington Post, The New York Times, other newspapers, the TV networks and other media derided now as “main stream media”  opened citizens’ eyes to the deception and waste of lives going on in Vietnam.

Less than two years later, President Nixon pulled the last U.S. troops out of Vietnam. By then he was fighting on another front — his personal war against what he considered a radical, left-wing conspiracy by news organizations and others he believed were out to get him.

For a journalist, “The Post” is an affirmation. The pursuit of truth to help citizens know what is going on in their government and community is a challenging and essential profession. Few stories have the magnitude of the Pentagon papers — the Mount Everest to our Dunn’s Mountain. But we have an important role to play.

And we have to do it right.

Imagine how a pivotal event like the leaking of the Pentagon Papers would play out in today’s many-splintered media landscape.

If The Times and The Post succeeded in getting their hands on such a document and publishing it, what would Fox News do — talk about the report’s details or go on the offensive against the newspapers for publishing excerpts against the president’s wishes?

Facebook and Twitter would go crazy, with the president tweeting about the “failing” New York Times and “fake news.”

And the 24/7 news cycle would soon have talking heads argue back and forth — not about the facts around the Vietnam war so much as about political implications for the president and Congress. How will this play out in midterm elections? Does this mean more trouble for the president? What’s his approval rating now, anyway?

Please, just tell me what happened.

“Reporters, especially though not always exclusively political reporters, are more interested in the meaning of facts than the facts themselves,” Swaim writes.

Another Wall Street Journal column, this one by Allysia Finley (“Scholars Get The Real Scoop on ‘Fake News’”), is more pointed in its criticism.

Unlike the Wall Street Journal? I would say no media outlet is perfect on this score. Separating fact from opinion is as hard on Fox News as it is on CBS.

The 24/7 news cycle and social media deserve some blame for this. The competition to be first or fastest or most fantastic — click, click, click — is intense.

When that happens on the national level, it makes people skeptical of news organizations on every level, right down to the local newspaper.

Considering how Richard Nixon reviled the news media — what his vice president called the “nattering nabobs of negativism” — and included reporters on his enemies list, today’s tweets about “fake news” seem almost lightweight.

But the concerted campaign to discredit major news outlets that don’t toe the conservative line goes deeper than 140 or 280 characters. And it’s troubling.

To some critics, “The Post” paints the journalists of 1971 in a conveniently rosy light. Maybe so. But at a time in our history when citizens needed the facts about the Vietnam War, journalists were contrary and resourceful and gutsy enough to deliver it. They weren’t aiming for popularity, just the truth.