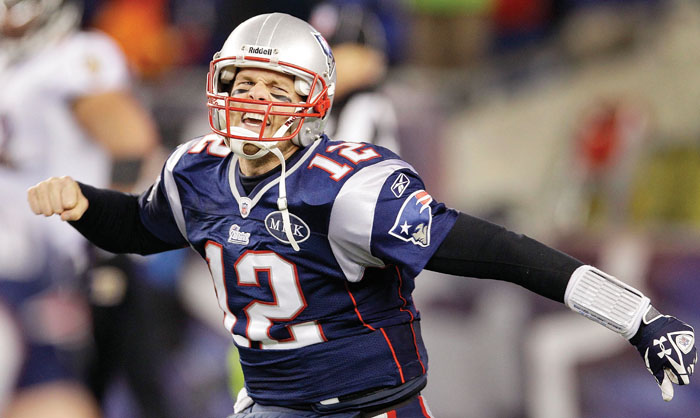 FILE - In this Jan. 22, 2012, file photo, New England Patriots quarterback Tom Brady (12) celebrates after scoring a one yard touchdown during the second half of the AFC Championship NFL football game against the Baltimore Ravens, in Foxborough, Mass. Two things have been consistent for Patriots over the past decade: Tom Brady and reaching the AFC championship game. The Patriots’ 40-year-old quarterback will try to lead his team to a place in its seventh straight conference title game when it hosts the Titans. (AP Photo/Stephan Savoia, File)

FOXBOROUGH, Mass. (AP) — Two things, among many, have been consistent for the Patriots the past decade: Tom Brady at quarterback and New England in the AFC championship game.

Brady will try to lead his team to its seventh straight conference title game Saturday when it hosts the Tennessee Titans in the divisional round.

It has been a challenging week off the field for the Patriots following reports of turmoil involving Brady, coach Bill Belichick and team owner Robert Kraft. But Brady says he’s never doubted his team’s ability to compartmentalize potential distractions.

“I think we have a job to do and we know what our job is and that’s to go out and play football at a high level and play well,” he said. “Nothing really should get in the way of that.”

Tennessee hasn’t been to a conference championship game since the 2002 season, but has been invigorated coming off its first playoff win in 14 years.

“Nobody respects us. Nobody really expects a lot from us. That’s fine,” he said.  “We haven’t been a very successful team in the last 10 years. So it’s easy for people to overlook us. So we’ve got to take care of business and start winning games like this to get the respect that we desire.”

To get it, they’ll have to stop a quarterback that has been nearly unbeatable in this round of the postseason.

He also has a 6-1 career record against the Titans with 13 touchdowns and just one interception.

Titans quarterback Marcus Mariota was mostly unflappable in leading his team back from an 18-point halftime deficit to beat Kansas City — the largest comeback on road in Super Bowl era.

But since 2001, quarterbacks making their first or second career playoff start are 0-7 against New England.

“When it comes down to it, it’s all about us,” Mariota said. “I think that’s kind of been the mindset through this entire season.”

Ups and downs come and go, you just want to try and make the most of this opportunity.”

Some things to watch on Saturday:

MOVING ON UP: It will be Bill Belichick’s 37th career playoff game as a head coach, breaking a tie with Tom Landry and Don Shula for the most in NFL history.

HEISMAN BROTHERS: Mariota, the 2014 Heisman winner, and Derrick Henry, the 2015 Heisman winner, combined to turn in the best rushing performance in franchise history in the wild-card round. Henry ran for a career-high 156 yards, and Mariota added 46 yards. Henry will be starting his third straight game with DeMarco Murray already out (right knee).

PRESSURE: The Titans ranked fifth in the league with 43 sacks during the season and added four more against the Chiefs last week. Three-time Pro Bowl defensive lineman Jurrell Casey had six from his interior spot, while Morgan led the Titans with 7 ½ sacks. Linebackers Brian Orakpo (seven) and Wesley Woodyard (five) give the Titans a variety of options to attack Brady, not counting backup linebacker Erik Walden (four).

EXPERIENCE GAP: New England has 41 players with postseason experience, most of 2017 playoff teams. Fourteen Patriots players have played at least 10 playoff games. That’s more such players than 11 other playoff teams combined (13). Before the start of this postseason, the Titans had 18 players who had appeared in a playoff game.

BELICHICK and LEBEAU: There aren’t too many current NFL coaches that have been around the game longer than Belichick and Titans defensive coordinator Dick LeBeau .

LeBeau has an NFL-record 45 consecutive seasons as a coach, with Belichick at 43. Yet, with Belichick as head coach, he and LeBeau have faced off in the playoffs only once: the 2004 AFC championship game that New England won in Pittsburgh 41-27.

The respect between the two is mutual.

“Not very many coaches have the record coach Belichick’s gotten. In fact he’s probably closing in on the best ever,” LeBeau said.

Said Belichick: “Coach LeBeau is as good as there is, as good a defensive coach as there is.”