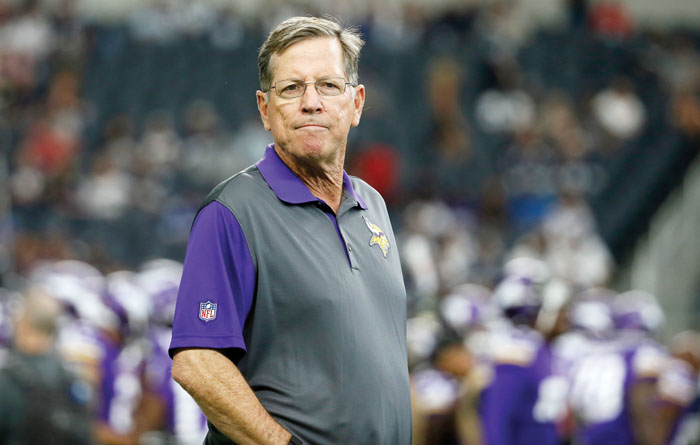 FILE - In this Aug. 29, 2015, file photo, then-Minnesota Vikings offensive coordinator Norv Turner watches the team warm up before a preseason NFL football game against the Dallas Cowboys, in Arlington, Texas. A person familiar with the situation says the Carolina Panthers are interviewing Norv Turner for their vacant offensive coordinator position. The person spoke to The Associated Press Thursday, Jan. 11, 2018, on condition of anonymity because the team does not discuss potential coaching candidates. The Panthers fired offensive coordinator Mike Shula and quarterbacks coach Ken Dorsey Tuesday, two days after a playoff loss to the Saints. (AP Photo/Tony Gutierrez, File)

CHARLOTTE (AP) — There will be a Turner family reunion in Charlotte.

The Carolina Panthers hired Norv Turner on Friday as their new offensive coordinator to replace Mike Shula, who was fired earlier in the week after seven seasons with the team.

Turner, 65 inherits an offense that includes a unique talent in quarterback Cam Newton, versatile running back Christian McCaffrey, reliable tight end Greg Olsen and a solid offensive line. However, while the Panthers finished 12th in the league scoring in 2017, they were just 28th in passing.

He’s the latest member of the Turner family to join the Panthers.

Ron Rivera worked as defensive coordinator for Turner when he was the head coach of the San Diego Chargers before Rivera joined the Panthers as head coach in 2011. They have remained close friends.

“Norv has coached Hall of Famers, he’s set a lot of people on the career paths that they’ve had,” Rivera said in a news release Friday. “I’m excited about his knowledge and his offensive prowess. It’s going to be invaluable to us have him evaluate our personnel and help take our quarterback to another level.”

He last worked with the Minnesota Vikings in 2016, but that ended abruptly with Turner resigning after seven games with the offense ranked 31st in the league.

Turner had been hired in 2014 by first-time head coach Mike Zimmer in Minnesota. Turner and his son Scott, the quarterbacks coach for the Vikings at the time, played a key part in the decision to draft Teddy Bridgewater with the last pick in the first round. Bridgewater took over as the starter three games into his rookie year and showed improvement in his second season, though the Vikings were a defense-driven, run-first team that didn’t ask Bridgewater to take over games.

But the Vikings ranked just 27th and 29th in the NFL in total yards in Turner’s first two years and 20th and 16th in scoring, with a rushing title for Adrian Peterson in 2015 the most notable accomplishment.

The Vikings went 11-5 in 2015 to win the NFC North and started 5-0 in 2016 until an injury-ravaged, vulnerable offensive line contributed to the collapse.

Bridgewater’s progress had been painfully thwarted right before that regular season started by a dislocated knee and multiple ligament tears, but emergency acquisition Sam Bradford was playing well in his place. But after the offense struggled in two straight losses on the road following the five-game winning streak, Turner stunned Zimmer by resigning his post.

Still, he has the respect of his former players.

“He has a history of developing quarterbacks. His track record speaks volumes,” Bridgewater said.

Bridgewater said Turner will be good for Newton, who is coming off his two worst seasons in terms of quarterback.

“Carolina actually ran a similar system to what Norv runs. So, it won’t be too much transitioning,” Bridgewater said. “They still throw those deep balls down the field, deep over routes, deep daggers.”

Vikings wide receiver Jarius Wright said he enjoyed playing for Turner and also think he will be good coach for Newton.

“Cam does a lot of good things that Norv likes to get done,” Wright said.

“Also, I don’t know if you remember a couple years ago how we used Jerick McKinnon and they have Christian McCaffrey. A lot of ways they can get a chance to spread the ball out.”

Bridgewater will be interested to see what happens in Carolina.

“He loves pushing the ball down the field, heavy play action,” Bridgewater said. Let’s “see if he made some changes with this year off or if he’s just been playing golf and sitting on the lake.”