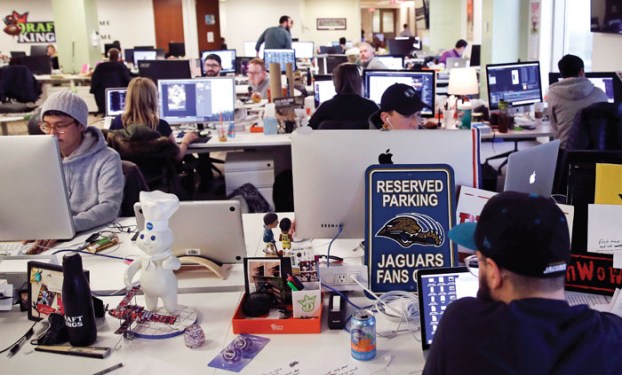 In this Thursday, Jan. 11, 2018 photo, employees work at the DraftKings office in Boston. The leading daily fantasy sports company has launched a new sports game that lets users hone in on a single NFL football playoff game, which has some gambling experts wondering if the contest inches the industry closer to the territory of sports betting that remains illegal in most of the United States. (AP Photo/Charles Krupa)

BOSTON (AP) — A new daily fantasy sports game that lets users hone in on a single NFL playoff game has some gambling experts wondering if the contest inches the industry closer to the territory of sports betting that remains illegal in most of the United States.

The “Showdown” variant offered by leading fantasy sports company DraftKings allows users to pick six athletes from two teams playing against each other in a real-life football game, racking up fantasy points based on stats like touchdowns, receptions and yards passing, rushing or receiving. That means users playing “Showdown” this weekend can wager on performances in the Jaguars-Steelers game Sunday without having to wait for the Saints-Vikings game to play out several hours later.

The 2006 federal law that effectively banned online gambling but gave rise to daily fantasy sports requires daily fantasy contests to be based on the performances of athletes in “multiple real-world” sporting events — not just single games. That detail is leading some advocates to question how DraftKings and regulators operate.

“This new game continues the industry trend of trying to get as close as possible to single game betting,” said Keith Whyte, executive director of the National Council on Problem Gambling, which is neutral on legalized gambling but pushes for strong regulations and consumer protections.

DraftKings says the federal law — the Unlawful Internet Gambling Enforcement Act — only applies if there’s an underlying violation of state gambling statutes first, and, so far, no state has objected to the competition.

State laws vary widely, but policymakers in 18 states responded to the industry’s popularity by legalizing and regulating daily fantasy sports. Many of those regulations were developed with heavy lobbying from DraftKings and other industry leaders. Daily fantasy companies largely avoid another 10 states where laws are worded in ways that make it more difficult to operate.

The Boston-based company has also offered contests for other one-off events like NASCAR races and golf tournaments since 2015, without any complaints from regulators, he added.

Daniel Etna, a New York sports lawyer who closely follows the sports gambling industry, said the game appears to comply with most if not all new state laws approved in recent years to legalize and regulate daily fantasy sports.

In New York, the state Gaming Commission determined in December that the contest was legal because it’s based off how individual players perform in the game, and not the “score, point spread or team’s performance,” said commission spokesman Brad Maione.

One key is that “Showdown” requires users to pick at least one player from each team in a single game. So fans choosing from the Titans-Patriots game on Saturday can’t just stack their lineup with Tom Brady, Rob Gronkowski and other New England stars without any Tennessee players.

Jeffrey Ifrah, a Washington-based attorney specializing in online gambling, isn’t convinced there’s much appetite to enforce the laws, even if there was a conflict. Many of the new fantasy sports laws don’t even require states to approve new contests.

“None of these states really thought about this,” he said.  “They were given these laws to pass and they did it. There wasn’t a lot of legislative debate.”

The U.S. Supreme Court is also weighing a bid by New Jersey to overturn the sports betting ban in effect in all but four states (Delaware, Montana, Nevada and Oregon). A favorable ruling this year could make handwringing over daily fantasy sports moot.

“We would only look into a particular game if we received a complaint about it, which we have not in this case,” said Edward Grewach, general counsel for the Missouri Gaming Commission.

“We do not require review of every new game, so no, we have not looked into it,” said Elaine Lidholm, a spokeswoman for Virginia’s Department of Agriculture and Consumer Services, which oversees the industry.

The single-game format could have implications beyond the early rounds of the NFL playoffs, where eight teams play in each of the first two weeks and four teams play during the conference championships. DraftKing’s chief rival, New York-based FanDuel, says it has “exciting plans” for the Super Bowl, the most gambled on single game in the world.

If successful during the NFL playoffs, variants like “Showdown” could extend into the regular season next year and even potentially be offered for single games in other sports.