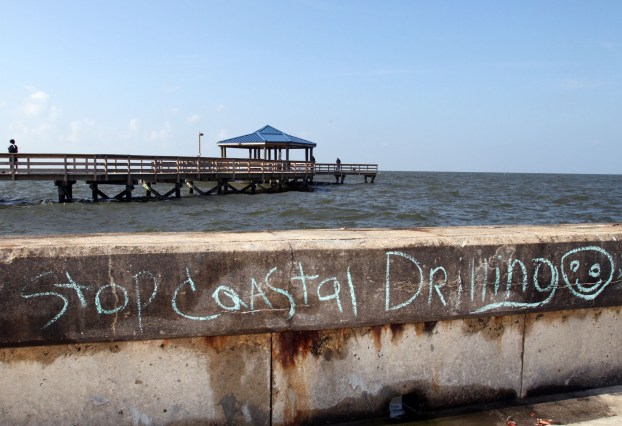 A graffiti message is scrawled on the seawall at the harbor in Pass Christian, Miss., Thursday, June 10, 2010. The Mississippi Gulf Coast was bracing for oil from the Deep Water Horizon spill to reach its shore. AP Photo/The Sun Herald, TIm Isbell

Drilling off of our coastline is unacceptable. It doesn’t matter what side of the aisle you sit on. You should be outraged at the black smoke of Big Oil.

During the first week of January, President Trump rolled back the Outer Continental Shelf Lands Act (OCSLA) enacted to preserve natural areas where people from around the world may recreate. Now, with a sweep of the pen, all of that could end.

Need I remind anyone of the devastation in Prince William Sound? You must remember the explosion of the Deep Water Horizon, still producing rainbow slicks in the back marsh of the Gulf. Two of our most precious treasures were destroyed due to the greed of a few executives.

Don’t let one nut destroy one of the most pristine coastlines in the world. With one slip of a wrench we could lose the most diverse surf fishing grounds in the world or the emerald faceted waters of Emerald Isle. Tell congress once and for all — North Carolina is not for sale.

Lessons from the Toyota-Mazda miss

By Dr. Dan Freyer NC Policy Watch Last week was a good one for the state of Alabama. Not only... read more