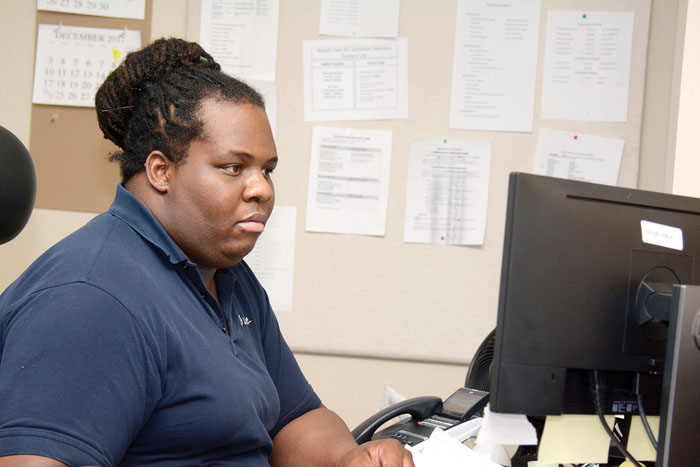 With a low of 23 degrees, the week before Christmas was unseasonably cool for North Carolina.

Despite these temperatures, the Salisbury Veterans Affairs hospital continued throughout the week with business as usual. One employee went beyond the call of duty.

Shadarius Barksdale, an advanced medical support assistant, has a wealth of experience working at the hospital’s mental health desk scheduling and checking in veterans. Often, he will be approached by veterans seeking assistance through the homeless program, which offers a range of services from housing assistance to basic necessities.

That week, Barksdale was approached by a veteran seeking a coat. He quickly called the on-duty homeless program social worker who came to assist the man.

But the veteran returned empty handed.

He could have let the man walk away or direct him to other community resources. Instead, Barksdale took his coat and handed it to the veteran.

“It was right around Christmas time so I was like ‘Merry Christmas,’” he said.

Azjah Stallings, another medical support assistant, was working with Barksdale that day.

“It was cold then, and Shadarius just offered his coat,” Stallings said. She said the veteran asked ‘are you sure?’ and Barksdale replied, ‘Yes, I’m sure. Trust me, it’s fine.”

Barksdale said he felt it was just the right thing to do, even though it was his only coat.

“I always try to put myself in other people’s shoes. I treat people the way I want to be treated,” Barksdale said. “What you put out is what you get back.”

For the veteran, the coat might not have come at a better time. The week of Christmas, Salisbury had a low temperature of 15 degrees.

But, North Carolina would then experience one of the longest cold snaps in recent history. The temperature in Salisbury dropped to a low of 3 degrees the first week of January, with an average temperature of only 20.

For his selflessness and compassion, Barksdale has received several recognitions, including a small monetary award to help reimburse him for the new coat he had to purchase.

“Shadarius is a shining example of the caring and compassionate employees who go above and beyond while serving our veteran population every day,” said interim director Linette Baker. “He is a testament to our entire staff, and we’re proud to have him.”

While the cold snap may be over, the Salisbury VA Health Care System is always looking for men’s and women’s clothing to serve homeless and in-need veterans. Clothes, shoes and other donations can be dropped off at the Salisbury VA Medical Center campus at the voluntary services department located in Building 6. For specific information about donation needs, call 704-638-9000 ext. 13409.

If you see or know of a veteran who is homeless or at risk of homelessness, call or share the number for the National Call Center for Homeless Veterans: 877-4AID-VET (877-424-3838). The hotline is available 24/7. Visit www.va.gov/homeless for 24/7 online chat support.