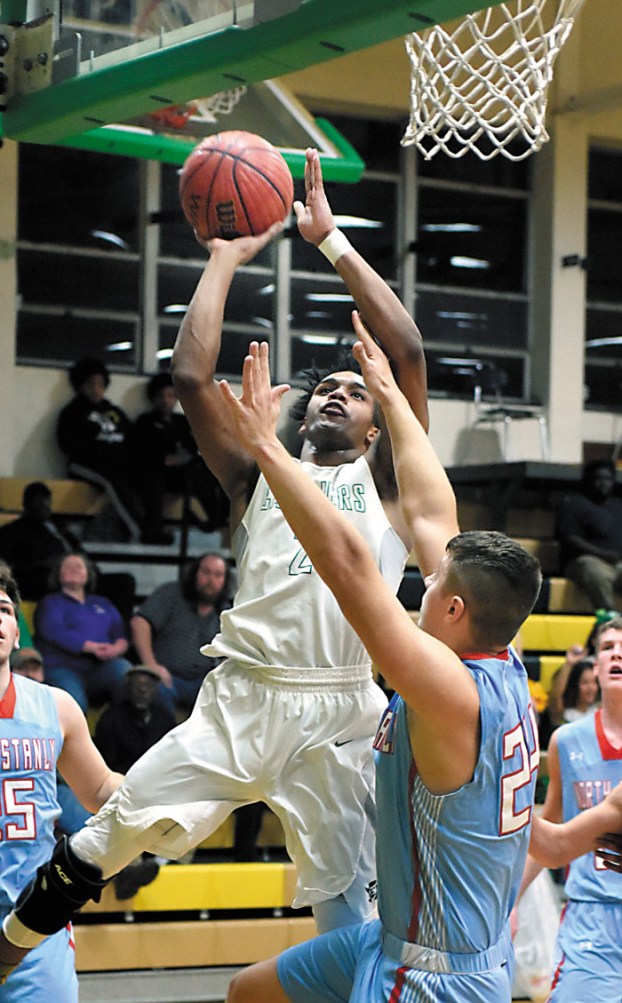 After squandering second-half leads in their previous two games, the Cavaliers held off visiting Albemarle, 67-62, and remained perched atop the Yadkin Valley Conference standings.

“The second half was a tremendous team effort,” coach Martin Unger said, after North (9-5, 8-1) rallied from a three-point halftime deficit. “I thought we played harder than them. I thought we made them shoot contested, hard shots that they couldn’t make. They killed us in transition in the first half, but not in the second. That was an adjustment and a conscious effort that  helped us win the game.”

Tightening its defense and preventing fastbreak layups was a needed adjustment for North. The Cavs looked like a disorganized yard sale in the first half, when they missed 12 free throws and were called for a technical foul for having six players on the court. That — and 12 first-half points by senior wide-body Adafe Price — helped Albemarle (12-5, 7-2) open an 11-point lead with 3:35 remaining in the second quarter.

“And three of my starters were in foul trouble,” said Albemarle coach Marc Raye, who probably will hear whistles in his sleep. “Honestly, I was surprised we were still up three at the half.”

North, which secured a four-point victory against Albemarle in its late-November season-opener, announced its intention with a 9-0 run to start the second half. There was a power-drive layup by sophomore Chaz McCombs, a three-point play by Dayjuwon Cooke, a jam by Cooke and a pair of Brevin Goodlett free throws that provided a 42-36 North lead.

“We knew it wasn’t going to be easy,” said Cooke, a 6-foot-4 junior who rebounds with wrecking-ball force. “And we knew we’d be in a fight the whole game. But the first thing we had to do was talk to each other. Brevin and I, as leaders of the team, had to show leadership.”

They needed every bit of it after Albemarle closed to within 54-52 on a fourth-quarter layup by elusive senior Noble Washington. Baskets by North’s Quintous Smith and Derrick Page restored order before Smith’s half-court drive a layup left the Cavs with a 62-56 edge with 2:36 to play. But perhaps the game’s most important play came when Unger signaled for a timeout with McCombs triple-teamed in the right corner and in danger of turning the ball over with 1:50 remaining.

“We had pulled away and then looked like we wanted to give it back,” Unger said. “But we came out of that timeout, got a big offensive rebound and hit a shot.”

Both by McCombs, who muscled inside for a rebound and hit a stick-back with 1:39 to go. Sixteen seconds later he hit the first of two free throws to give North a 65-58 lead.

“It was great for the sophomore to step up at that time,” Goodlett said, after netting a game-high 18 points. “We executed some plays, right when it was time to pick it back up.”

The teams were still arm-wrestling for first place until the final minute. Washington threaded a 3-ball from left corner that drew Albemarle within four points before Page’s free throw with 25.8 seconds to go sealed the verdict.

“The three ingredients to a loss are turnovers, missed free throws and missed layups,” Raye said. “We had all three tonight. We probably missed 12 or 13 open layups, easily. We didn’t take advantage of the advantages they gave us.”

Raye later said that North was “hitting on all cylinders,” but that wasn’t all that evident.

“We’ve got things to work on,” Unger concluded. “But this was our best game. That’s a good thing. It means we’re getting better.”

NOTES: Cooke (15 points) and Page (13) joined Goodlett in double figures. Price led Albemarle with 16, but only four came in the second half. … North continued its abysmal free-three shooting by converting just 13 of 32 attempts. … Both teams break for exams week before returning to action next Friday. North visits Uwharrie Charter while Albemarle has a marquee matchup with North Stanly at Pfeiffer’s Merner Gym.