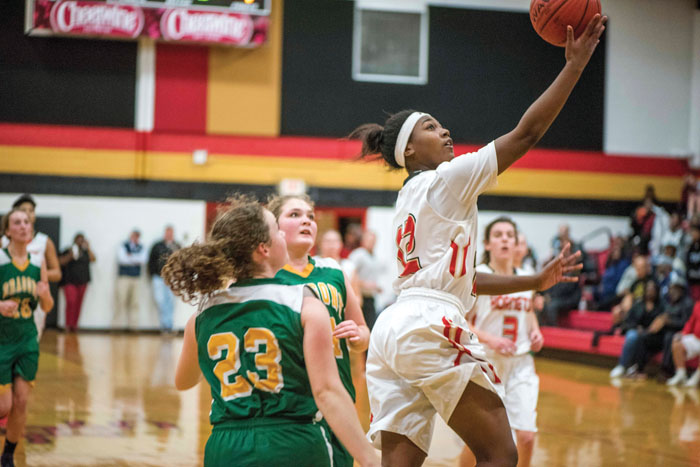 SALISBURY — “Fortunately, we’ve got her,” said relieved Salisbury girls coach Lakai Brice, as she nodded in the direction of 6-foot junior Bryanna Troutman.

Salisbury struggled desperately with West Davidson on Friday, but Troutman took over at the end and lifted the Hornets to a 49-44 Central Carolina Conference victory. Despite a lot of close calls and a lot of shaky outings this season, the Hornets (13-2, 10-1) are still winning steadily. They’re tied for first place with Ledford.

“No, we didn’t play very well,” Brice said. “But the last three or four minutes we settled down, we executed our plays, and we got the ball to Bryanna.”

Troutman has scored in double figures in 28 of her last 29 games going back to last season. She combines touch and power in the half-court game and she can go coast-to-coast with a defensive rebound at any time. If she has a problem, it’s that she’s too unselfish. She’s determined not to force anything and lets the game come to her. On Friday, she almost waited too long to assert herself.

West Davidson (8-8, 4-7) also pushed Salisbury in a three-point loss in Tyro on Nov. 29. Salisbury is 28-0 against the Green Dragons in this century, but this season’s two games have been the two closest.

“They’ve got two tall girls and pretty good shooters,” Brice said. “They have improved a lot from where they were. They play hard, they’re well-coached and they play together well.”

The Hornets got a third-quarter lift from forward Tacorra Robinson, who scored five points in a flurry. Fulson produced a steal-and-layup combination, Lexi May tossed in a 3-pointer and Troutman had a serious swat to end the quarter. Salisbury was up 36-28 and appeared to be in good shape.

But Ainslee Conrad started the fourth quarter with a 3-pointer for the visitors, Karlie Cook made a 10-footer, and the Green Dragons were only down three.

With 5:39 left to play, Olivia Sharpe nailed a 3-pointer, and with 4:39 left Sharpe smiled sheepishly after accidentally banking in another 3-ball. West Davidson had momentum and confidence and was only down, 41-39.

It got worse for the Hornets before it got better. Cook’s put-back made it 41-all. Lexi Clontz attacked after a Salisbury turnover, drew a foul and put West Davidson ahead with two free throws, 43-41. Salisbury’s timeout that followed, with 3:42 remaining, was mostly a get-it-to-Troutman sermon by Brice.

“One of the good things about these girls is they don’t panic,” Brice said. “They’re showing some growth, some maturity. We’ve been fighting through a lot of illness (Maria Capito and Robinson have been sick), but we went back there and got the ball where it needed to go.”

Salisbury’s biggest possession all night was the one coming out of that timeout. The Hornets were patient. Capito passed up a 3-point look and bounced a pass to Troutman on the left block. One quick spin and one lefty layup later, and it was 43-all.

“I’ve been working on my left hand a lot and it paid off,” Troutman said.  “I didn’t think they could guard me inside.”

Troutman’s defensive presence forced a bad pass for a backcourt violation with three minutes left. Again the Hornets went to Troutman, and again she produced two points with her left hand for a 45-43 lead with 2:42 remaining.

West Davidson had chances to retake the lead, but a defensive board by May ended a critical West Davidson possession, and Brice used another timeout. Coming out of the timeout, with 1:03 remaining, Salisbury ran its favorite inbounds play from in front of the Salisbury bench. Fulson made a perfect lob pass to a cutting Troutman, who reeled it in like a tight end and flipped in two more for a 47-44 lead.

“I faked left, went right and I was open,” Troutman said. “And the pass was right there.”

Troutman rejected a 3-point try on West Davidson’s next possession, and then made two free throws to finish off the Green Dragons.

“We picked it up at the end,” Troutman said. “We played harder and we did what we needed to.”

Troutman had 10 rebounds, four blocks and four assists, along with her 21 points. She scored 10 in the fourth quarter. Robinson had nine points and nine rebounds. Fulson scored nine points.

“We talked about just fighting through this game,” Brice said. “Now we can rest a little bit and try to get everyone healthy.”