D.B. Kepley’s work ethic carried him through the Depression, war and everything else 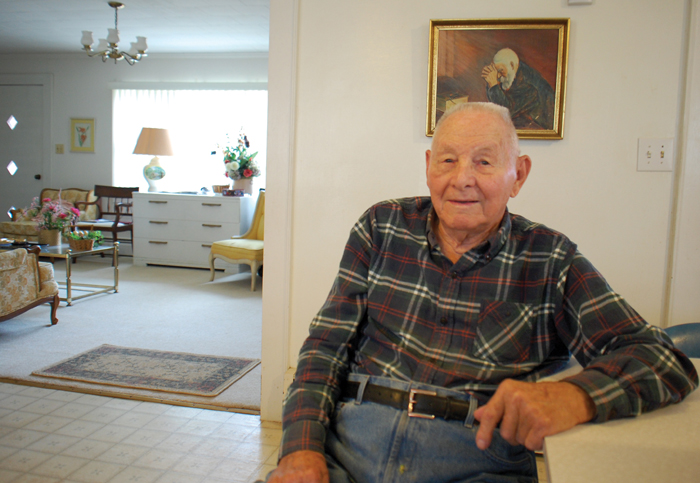 SALISBURY — As he sits in his kitchen and allows himself to reminisce, David B. “D.B.” Kepley shrugs off those coming-of-age years of working on a farm, attending a two-room school, seeing his family survive the Great Depression and serving as a gunner on an attack plane in World War II.

That’s just what you did back then. He’ll tell you there was nothing heroic about it.

Kepley motions up the road and says he spent his childhood in the farmhouse about 200 yards away. His daughter, Cynthia, lives across the street from him in a house that once belonged to one of D.B.’s brothers. D.B.’s son, Michael, who has suffered two strokes in recent years, stays in the house with D.B. now.

Wife Peggy died back in 2015. They had married in 1950 and moved into this house in December 1956. With help from his father and a brother, D.B built the home when he found time away from his job.

Kepley carved out a 34-year career with Taylor Manufacturing. D.B. laughs, recognizing he has now been retired longer than he worked for the company.

Come Feb. 16, Kepley will be 95 years old. If he makes it, he says, but there’s no reason to believe otherwise.

“As far as I can tell, I’m the oldest male around here,” he says, thinking about all the people who live up and down his road in eastern Rowan County.

Even with knee and hip replacements over the years, Kepley still walks with a purpose, though he complains he doesn’t get to his favorite High Rock Lake fishing spots as much because he doesn’t want to risk any falls.

He drives where he wants to go. He uses his glasses only for reading. His hears quite well, thanks to his aids, and with his flannel shirt and jeans, he resembles a lumberjack ready for a hard day’s work.

As a kid, Kepley and his four brothers and sister — Ray, Carl, Curtis, Burton and Ophelia — could do most every chore on their parents’ 82-acre farm. The farm had fields of cotton, corn, wheat and oats, and a lot of what was produced went into feed for their livestock.

When wheat thrashing time came, Kepley would help other farmers in the area. They paid him a couple of dollars a day. As a teenager, he also helped in the building of the present-day Providence United Methodist Church, recalling that his pay was 25 cents an hour. Cotton mills paid about the same.

Kepley and his siblings — he was the youngest and is the only one surviving — would shell black-eyed peas and butter beans, and their father would take them into town and trade them for groceries during the Depression.

Kepley remembers the boys in the family working hard through the week on the farm so they could attend the baseball games that Lee File’s store sponsored off Bringle Ferry Road on Saturday afternoons. “It was really something to look forward to,” Kepley says.

D.B. says his father and other farmers would join together and build houses for people who needed them in the hard times. His father also cut rights of way for surveyors who were determining the boundaries of High Rock Lake.

His dad would come home some days just covered in poison oak.

For the first seven grades, Kepley attended the two-room Poole School. After that, he took a bus daily to Rockwell School, which went to the 11th grade then, and he graduated in 1940.

In Liberty, Delmar Misenheimer operated a sawmill, and D.B. and his dad would do some work for him, getting lumber to the mill. “I run the tractor, and Dad got the logs out by hand,” D.B. says.

Later on, D.B. attended a training program in Salisbury for machinists. The sessions came as the United States headed into World War II, and they led to a job for Kepley at the Norfolk Navy Yard in Portsmouth, Virginia.

For the next 27 months, Kepley operated planing machines, lathes, grinders and shapers in the Herculean effort to build and repair ships for the war. He eventually graduated to 75 cents an hour.

But the younger people at the Navy Yard learned one day they were being laid off and would have to report to the draft board, which for Kepley would be in Richmond. He heard from a buddy he could possibly sign up for the Army Air Force (Army Air Corps), which appealed to D.B. more than the regular Army or Navy. Mark Wineka/Salisbury Post On a three-day weekend pass toward the end of World War II, D.B. Kepley, far right, was able to meet up with older brothers Curtis, left, and Burton, middle, while they all were stationed in the Philippines. Before this meeting, D.B. hadn’t seen his brothers for several years because of the war.

Eight guys took the required exam at Langley Field; Kepley learned later he was the only one to pass. He entered active service Feb. 15, 1944, as he was turning 21.

Brothers Curtis and Burton already had been drafted into the Army and were serving in the Asiatic-Pacific Theater — Curtis served in a motor pool; Burton, in communications. Both ended up in the Philippines.

D.B.’s basic training and instruction in airplane armament and as an airplane gunner took him over the next year to Fort Meade, Maryland; Greensboro; Denver, Colorado; Fort Myers, Florida; Charlotte; and Myrtle Beach, South Carolina.

“We took a week’s training at Myrtle Beach firing at targets on the beach in the winter time,” Kepley says.

It turned out to be a great coincidence, but after a cross-country trip by train from Savannah, Georgia, to Sacramento, California, and long plane trips to Hawaii, Johnston Island and elsewhere in the Pacific, Kepley ended up in the Philippines in Luzon.

Thanks to his job in communications, Burton tracked down D.B., and the three brothers arranged to meet. “I didn’t know where they were or anything when I went over there,” D.B. says.

For D.B., getting together with his brothers meant securing approval for a three-day pass and thumbing with a buddy for 90 miles, grabbing rides with Army trucks going their way.

It was quite a reunion for the Kepley brothers. “Yeah, it was nice,” D.B. says, “because I hadn’t seen them in a couple years.”

Kepley downplays his contribution in the war. He served as a gunner on an A-20 attack bomber — a twin-engine, three-place plane. He manned the top-ball turret, which was equipped with machine guns for combat flights. Mark Wineka/Salisbury Many of D.B. Kepley’s keepsakes reflect his service in World War II, during which he was stationed in the Philippines and, after the war, in Japan. The small plaque recognizes his faithful service through his life to United Methodist Men.

His particular A-20s were meant for low-level flying and carried only a pilot and gunner. “The Japanese in the jungle couldn’t see us coming until we got on top of them,” Kepley says.

But he flew only two missions, mainly because many of the crews were wanting to hit their quota of missions so they could go home. Kepley says that meant considerable sitting around and waiting. He and some other guys played a lot of pinochle.

“I was in the war only five months, really,” Kepley says.

Kepley served in the 30th Bombardment Group of the 5th Army Air Force. Once the peace treaty was signed and the war was over in 1945, he became part of the occupational forces in Japan. His job also changed from gunner to truck driver, from October 1945 to March 1946.

“I kind of halfway enjoyed it,” Kepley says of his truck-driving job, though he had to survive a typhoon in Okinawa before reaching his ultimate destination at a base outside Tokyo. By April 12, 1946, he was being discharged at Fort Bragg.

Kepley bounced around after the war, doing some auto repair work in Elizabeth City and farther north in Virginia. He met Peggy Buie when she was working in Norfolk. They married Dec. 9, 1950, and Kepley steered them back to Rowan County, where he went to work for Taylor Manufacturing.

The company built conveyors and tables for bottling plants, and during his last 15 years, Kepley did a lot of traveling to supervise the installation of conveyor systems at mostly Anheuser Busch beer plants.

Kepley ended up going to places such as St. Louis; Nashua, New Hampshire; Jacksonville, Florida; Fairfield, California; and Los Angeles. He oversaw the conveyor work at a Schlitz plant in Brooklyn, New York, and also made five trips to South America and one to Canada.

He continues to attend Providence Methodist Church and has done good work with the United Methodist Men. “He’s one of the finest people I ever met,” says Hugh Martin, a friend from Thelma’s Tuesday morning coffee for military veterans.

When you sit down and go over your life and spread things such as medals, awards, discharge papers and photographs out on a kitchen table, it leads to reflection.