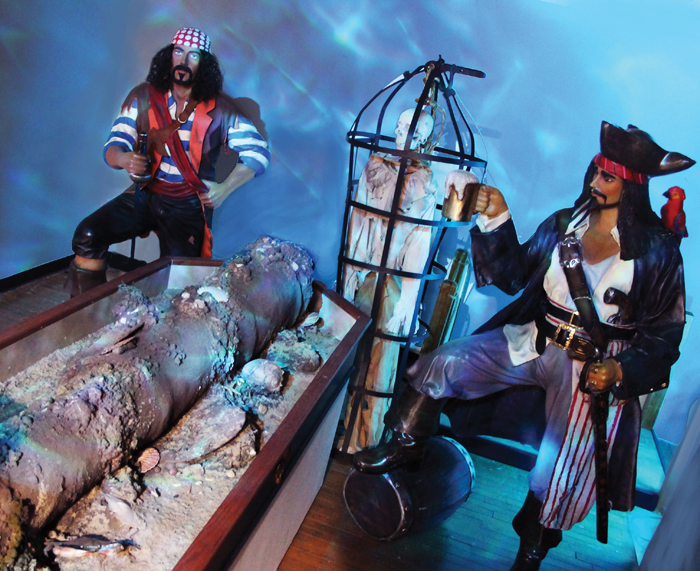 Traveling exhibit to showcase items from Blackbeard the Pirate’s Flagship, the Queen Anne’s Revenge at the NC Transportation Museum in January 2018.

Ahoy, me hearties! Ready yer sea legs and weigh anchor.  Pirates are coming!  It’s no prey, no pay for them and no quarter given.  Boom about!  The Queen Anne’s Revenge is on the move!

In 1718, the famed and feared pirate, Blackbeard, ran his flagship, the Queen Anne’s Revenge, aground near what is now known as Beaufort Inlet.  Three hundred years later, items from that ship are making their way across the state, appearing at the N.C. Transportation Museum Jan. 17 through Feb. 27.

The exhibit is available with regular admission, $6 for adults, $5 for seniors/military, and $4 for children 3-12.  Two years of aged and under are free.

“Blackbeard’s Queen Anne’s Revenge: 1718” features weaponry, nautical tools, and personal items that belonged to those pirates under Blackbeard’s command. Touch screens will tell the pirate’s story and provide information on the shipwreck’s recovery.  Hands on activities and replica items will explore 18th century pirate life, while a gallows and gibbet will show how these sailors paid for their piratical crimes.

“Blackbeard’s Queen Anne’s Revenge: 1718” will also include hands-on kid’s activities like pirate dress up, with available pirate garb and photo op stations. Kids can make their own pirate flag, and hoist it upon the mini-mast. A rope tying station will teach kids to tie the knots used by pirates.  Bell ringing activities also show how pirates regulated their day, announcing changes of the watch, meal times, prayers, and danger. 300 years after Blackbeard ran his flagship aground near Beaufort Inlet, kids will be able to make their own pirate flag and hoist it upon the mini-mast

In association with “Blackbeard’s Queen Anne’s Revenge: 1718,” the museum will host Pirate Day Jan. 27.  Activities, offered at the regular admission rate, will include explorations of life aboard a pirate ship, underwater archaeology, and pirate punishments, as well as a costume contest for adults and children. Tickets for Pirate Day will be sold in advance at www.nctrans.org.

Event upgrades include two opportunities to dine with friendly pirates.

Pancakes with Pirates will be offered at 9:30 and 10:30am, with pancakes, sausage, and orange juice enjoyed aboard a stationary railroad dining car in the company of friendly, roaming pirates. The cost, in addition to museum admission, is $10 per person.

Pirate Sandwich Ships will be offered at 11:30am, and 12:30pm, featuring ship-shaped sandwiches, fish and chips (Goldfish™ crackers and chips), carrots and celery with ranch dressing, and grapes on a sword skewer.  Juice or water will also be offered.  The cost, in addition to museum admission, is $12 per person.

Pirate Day will include a costume contest for adults and children at noon with prizes available for the top costumes.  The contest will be divided into age brackets for children (0-2, 3-5, 6-9, 10-12), with 13 years of age and older participating in the adult contest.

Guided tours for schools and other preformed groups will be offered each Wednesday through Friday, Jan. 24 through Feb. 23.  Guided tours will explore life aboard a pirate ship, underwater archaeology and pirate punishments.

Special activities will include a gallery hunt, identifying the parts of a pirate ship, knot tying activities, and making your own pirate flag.

Groups must consist of at least 15 people to qualify and receive reduced rates.  Those interested should contact June Hall at 704-636-2889 ext. 268.