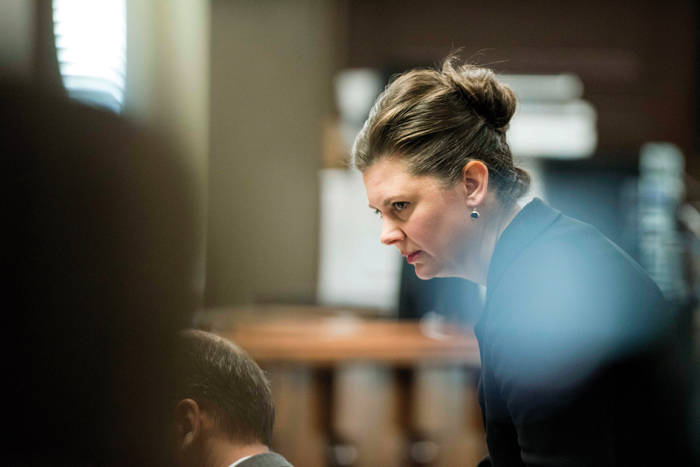 It was the second day of testimony in the murder trial of Marlene Postell Johnson, and much of it came from the veteran law enforcement officer.

Prosecutors have said Johnson, 65, killed Pierce because she believed Pierce was having an affair with her estranged husband, Ervin Johnson.

Court documents have shown that Johnson harassed and had assaulted Pierce. Pierce had taken out restraining orders against Johnson, with the last one expiring just a few weeks before her death.

Detectives said in search warrants that Johnson had mail that belonged to Pierce in her possession as well as aerial photos of Pierce’s home.

Pierce’s fiance, Chuck Reeves, testified that he found Pierce’s body in the bathtub at her home. He hadn’t heard from her and went to the home to leave his dogs for her to watch while he went away on business. The Kannapolis home was ransacked; blood was found in her bedroom, bathroom and other rooms.

Multiple first responders told jurors that they confirmed Pierce was already dead before they arrived and that the home had items strewn about the living room and kitchen, leading them to deem the death suspicious. Firefighters and EMS personnel, former Rowan Deputy Randy Rigsby and Detective Nathan Phillips, who was a master police officer in 2013, all testified that there was what appeared to be blood in the bedroom.

The paper towels were sent to the state crime lab and tested. Earnhardt did not testify as to whose blood was identified on the paper towel. Earnhardt said he collected DNA swabs from many of the doorknobs and other areas of the home, including a door, a wall and a hallway thermostat where he’d found specks of what he believed to be blood.

A Walgreens receipt in the kitchen was dated July 22, 2013, at 9:18 p.m. Prosecutors said during opening statements that Pierce went to Walgreens before she went home that day.

Earnhardt said he took multiple pictures of the crime scene from multiple angles, especially of the bedroom and bathroom. The bedroom had large blood stains on the floor and what investigators said they believed to be bleach.

The Rowan County investigator said officers did not find Pierce’s comforter but did find a piece of glass on her bed. He said detectives didn’t know the origin of the glass.

Jurors looked at many photographs of the crime scene including some taken in the bedroom and bathroom. Johnson became choked up and wiped tears from her eyes after seeing photos of the bedroom.

A handgun was found on a nightstand, but it wasn’t loaded. A bullet was stuck in the holster.

Defense attorney Jay White told the judge he had problems with showing partially nude pictures of Pierce to jurors because they could bias the jury toward Pierce. White argued, out of the presence of jurors, that the prosecution had already shown pictures of Pierce’s body in the bathtub and there was no need to show her nude from the waist down.

Reeves had already told jurors that Pierce typically wore only a nightgown or T-shirt to bed.

Judge Stuart Albright said the pictures and a subsequent video corroborates Reeves’ testimony about what Pierce wore to bed at night. District Attorney Brandy Cook argued that the video shows details that could not be seen in still pictures, including running water in the tub and other angles of the bathroom.

Albright allowed the video to be shown but had it stopped before the part where Pierce’s body was shown in the bathtub.

Investigators also found a piece of broken glass in the tub similar to what they found in the bed, but they still didn’t know where the glass came from, Earnhardt said.

He said they never saw the knife blade in Pierce’s neck but saw the wound. He took pictures of Pierce’s wounds once they removed her body from the tub and placed the body on a sterile sheet on the bathroom floor.

Cook said out of the presence of jurors that she believed the defense would argue that some evidence was lost, likely by the state crime lab. She said the reason she wanted the picture of Pierce’s body on the sheet used was to illustrate to jurors that Rowan County detectives conducted a thorough investigation.

Investigators also found loose hair strands in Pierce’s hand and on the bend of her elbow, which was collected and confirmed to belong to Pierce.

Earnhardt continued his testimony about what investigators found at Johnson’s Mooresville home. They collected portions of her mattress cover on her bed that had specks of blood on it. They seized her Hyundai Genesis vehicle and searched it.

The trial will continue at 9:30 a.m. today with further testimony from Earnhardt.