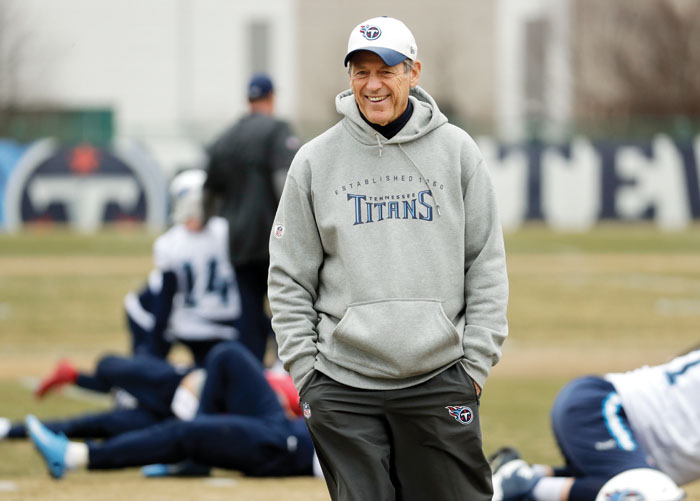 Tennessee Titans defensive coordinator Dick LeBeau watches as players warm up during an NFL football practice Wednesday, Jan. 10, 2018, in Nashville, Tenn. Titans linebacker Wesley Woodyard calls Tennessee's AFC divisional playoff game against Bill Belichick and the New England Patriots a "battle of the masterminds.'' The Titans' side of that chess match features LeBeau trying to slow down Tom Brady. The Titans are scheduled to play the New England Patriots in an AFC divisional round playoff game Saturday. (AP Photo/Mark Humphrey)

Doesn’t get much better than that for NFL fans. Tennessee linebacker Wesley Woodyard believes the rare matchup is a showdown for the ages.

“Oh man, it’s going to be a battle of the masterminds,” Woodyard said when the Titans defensive coordinator tries to outwit Belichick and his New England Patriots.

“Two Hall of Fame coaches, I’m sure Belichick will be there hands down. Coach LeBeau’s seen a lot, coached a lot of playoff games, so we’re relying heavily on his experience and to go out there and play hard man. That’s all we can do for our coach.”

Well, LeBeau is only in the Pro Football Hall of Fame for his 14-season career as a cornerback, though he certainly qualifies for consideration for designing the zone blitz on defense. LeBeau also has an NFL-record 45 consecutive seasons as a coach, putting ahead of only one man — Belichick with 43 — in that category.

The two will be very instrumental in determining the outcome on Saturday night when the upstart Titans (10-7) visit Belichick and his defending Super Bowl champion Patriots (13-3) for a spot in the AFC championship game.

And Belichick made it very clear that coaching against LeBeau is not something he enjoys.

“I wouldn’t use that word, no,” Belichick said. “It’s very challenging. Coach LeBeau is a great coach, he does a tremendous job, (he) has for his entire illustrious career as a player and as a coach. Really revolutionized the game, and his system has certainly withstood the test of time.”

Belichick ticked off how LeBeau’s Titans have led the NFL in rushing defense over the past two seasons and led the league this season for the fewest big plays allowed of 20 yards or longer. Belichick says the foundation of LeBeau’s defense remains the same over the years, modified for the players he has and the teams he’s facing.

The man with five Super Bowl titles as head coach in New England made clear he has great respect for LeBeau, whom he considers a good friend.

“He’s such a great person, very humble guy that accomplished so much but he’s very modest about it,” Belichick said. “I learn an awful lot from watching him, watching his defenses and watching the way that he does things. Techniques and adjustments and schematics and so forth. He’s one of the great coaches to ever walk the sidelines in this league.”

Told that Belichick said he learned a lot from him, LeBeau said he was humbled.

“Not very many coaches have the record Coach Belichick’s gotten, in fact he’s probably closing in on the best ever,” LeBeau said Wednesday. “That’s quite a compliment.”

The two haven’t coached against each other in the playoffs but once before with Belichick overseeing the Patriots. LeBeau and the Pittsburgh Steelers won home-field advantage in 2004 by beating the Patriots 34-20 on Oct. 31, then Belichick and New England won the AFC conference championship Jan. 23, 2005, beating the Steelers 41-27.

“It’ll be interesting to see how it comes out,” LeBeau said.

PHILADELPHIA (AP) — Nick Foles used the bye week to go back to basics.

The Philadelphia Eagles (13-3) are the first No. 1 seed to open the playoffs as an underdog mainly because Foles is the starting quarterback instead of Carson Wentz.

But Foles hasn’t lost confidence despite public perception that he can’t lead the Eagles to the Super Bowl, or even a victory over the Atlanta Falcons (11-6) on Saturday in the divisional round.

“It’s just going out there and playing and staying in the zone and trusting my instincts,” Foles said.

Foles has had success against defenses similar to Atlanta’s. The Falcons employ a Cover-3 scheme as their base defense. The three deep zones are covered by two cornerbacks and the free safety. The Seahawks have excelled at it for several years. Of course, they have a world-class secondary.

Foles has never faced Quinn, but he beat the Jaguars in 2014 with the Eagles and in 2016 with the Chiefs. He beat the Seahawks in 2015 with St. Louis. Gus Bradley, who preceded Quinn as Seattle’s defensive coordinator, was Jacksonville’s coach in both games against Foles.

Foles is 65 of 105 (61.9 percent) for 842 yards with five touchdowns passes and one interceptions in those three games against Cover-3 defenses.

“You know where they are going to be. That’s the thing with this defense,” Eagles coach Doug Pederson said. “They play with a lot of confidence. It’s an aggressive style. It’s fast flow and they are not going to pull any punches.

“They are not going to try to trick you or do anything to get in your head or anything like that. It’s just line up and try to beat us.”

The Falcons don’t blitz much but still get pressure on quarterbacks. They tied for 13th in the league with 39 sacks. Adrian Clayborn led the way with 9½ sacks, including six in one game against the Cowboys.

Atlanta allowed 17.5 points per game over the final six games and then shut down the league’s highest-scoring offense in a 26-13 win at the Los Angeles Rams in the wild-card game.

“This defense is much improved over the course of the season,” Pederson said. “You saw it against the Rams. They are fast. They are flying to the football.

“Secondary is aggressive. Guys know how to cover. A lot of single-high. They are going to challenge our receivers and that’s what you’re seeing on tape. It’s a quality defense, but that’s what we expect this time of year.”

Foles played well immediately after Wentz tore his ACL in Week 14. He was 20 of 48 for 279 yards with four touchdowns and no interceptions in his first five quarters versus 23 of 49 for 202 yards with one TD and two picks in the last five quarters.

QB RYAN BACK WITH FALCONS AFTER MISSING 1 DAY OF PRACTICE

Ryan was back with the team for Wednesday’s practice. He didn’t disclose details of his absence, but indicated he was attending to a family matter.

“I just want to thank everybody for their support and outreach. It means a lot to me,” Ryan said. “I’ve always tried to keep my family life private and I hope you can respect that and I’d like to continue to do that moving forward.”

Ryan and his wife, Sarah, announced in November they expect to become first-time parents in April with twins.

Coach Dan Quinn said Wednesday there were “no setbacks for him or for us” due to Ryan’s excused absence on Tuesday, when the game plan was installed.

“He is one of the best competitors and most professional ballplayers I’ve ever been around, so no adjustment for that,” Quinn said. “We’re fortunate he’s back here today and back into it.”

“I was able to get the game plan and kind of get the information I needed yesterday,” Ryan said. “I’ll be very well prepared for the game on Saturday.”

Yet he remains very much a part of the team even after injuring his spine against Cincinnati last month.

Shazier attended practice on Wednesday for the first time since undergoing spine stabilization surgery on Dec. 6.

Shazier posted a photo on Instagram from the team’s indoor training facility as Pittsburgh prepared to host Jacksonville in the divisional round of the playoffs. Shazier is pictured in a wheelchair wearing sweatpants and a Steelers jacket, a visit that gave his teammates a needed jolt.

“It was awesome to see him,” guard Ramon Foster said. “Everybody is worried but him and it proves that he’s as strong as it gets.”

The extent of Shazier’s injury has not been released. In his Instagram post, he said his visit to the facility was “a first down” in his recovery. Shazier wrote he has been “making strides” over the past month but added he is “far from done.” The 25-year-old says he is “working harder than ever” to get back.

The Steelers host the Jaguars on Sunday and the winner will advance to the AFC title game. Shazier is helping his team prepare. Defensive end Cam Heyward said Shazier is helping break down film like a scout, an extension of his role as the defensive play caller.

“He was the quarterback of the defense,” outside linebacker Bud Dupree. “He was the person who knew things were coming before the play was snapped. He helps us out a lot too, even while he is in the hospital.”

Updates on Shazier’s condition have been sparse, though his father Vernon said in a TV interview last week he believes Shazier will play again. Not that it matters to his teammates. For now, Shazier’s presence is merely enough.

“It’s amazing to see and just to have the attitude he has after all he’s been through man, it’s pretty impressive,” guard David DeCastro. “I don’t know if I’d be able to do the same.”