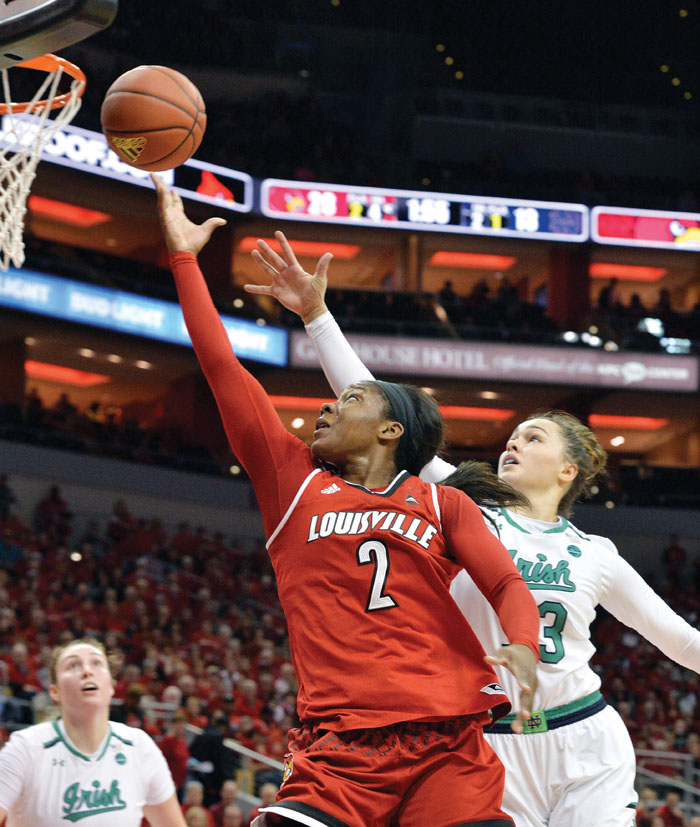 Louisville forward Myisha Hines-Allen (2) goes for a layup past the defense of Notre Dame forward Kathryn Westbeld (33) during the first half of an NCAA college basketball game, Thursday, Jan. 11, 2018, in Louisville, Ky. (AP Photo/Timothy D. Easley)

LOUISVILLE, Ky. (AP) — Asia Durr scored 36 points, Myisha Hines-Allen had a career-high 31 and No. 3 Louisville overwhelmed No. 2 Notre Dame on both ends for a 100-67 blowout victory Thursday night in an Atlantic Coast Conference showdown.

The unbeaten Cardinals (19-0, 5-0 ACC) erased an early deficit to dominate the short-handed Irish in nearly every phase during a marquee matchup between top teams. Louisville went on to the program’s biggest victory since upsetting top-seeded Baylor in the 2013 NCAA Tournament and snapped an 11-game losing streak against Notre Dame (15-2, 4-1 ACC).

Playing before a crowd of 12,614, Durr quickly set the tone with three first-quarter 3-pointers and eight overall in shooting 13 of 18 from the field. Hines-Allen kept pace with her, hitting 15 of 20 while grabbing 12 rebounds.

Louisville also overcame recent struggles in finishing off opponents by pouring it on against the Irish, leading by 44 early in the fourth in handing the Irish their 11th-largest loss in program history.

Jackie Young had 23 points and Marina Mabrey 14 for the Irish, who had won eight straight since losing 80-71 to top-ranked Connecticut. Notre Dame shot 44 percent and committed 18 turnovers.

Notre Dame: The Irish had been able to overcome knee injuries to several players and beat defending national champion South Carolina among its wins, but they were no match for Louisville after leading 7-5.

Louisville: The Cardinals added to their haul of victories against ranked opponents by starting quickly and keeping it going behind a season-best 72 percent shooting in the first half. Most importantly, they didn’t cool off and stifled the Irish defensively as well. Louisville dominated the boards 35-25, had 25 assists and used 10 players.