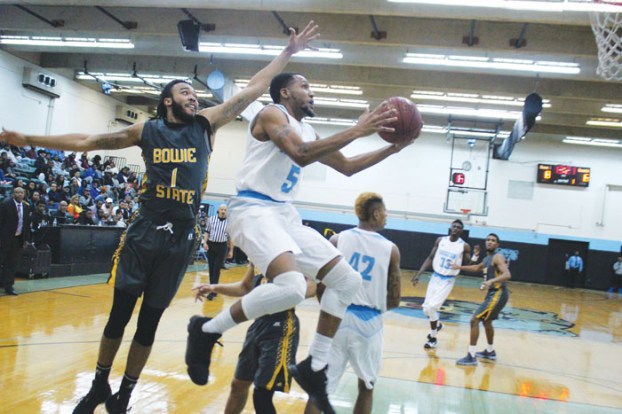 The Blue Bears essentially stunk up the gym, yet emerged smelling like a tray of cinnamon buns.

“We’re still trying to find ourselves,” coach James Stinson said after host Livingstone prevailed, 70-63, for its second straight league win. “I think we did an excellent job toward the end showing our poise. Up until then, we were kind of all over the place.”

Livingstone (5-6, 3-2 CIAA) was out-shot and out-rebounded, but never out-hustled by Bowie State (7-10, 2-4). The Blue Bears received a spinning layup from senior Cameron Burhannon with 1:14 to play and converted six free throws in the final minute to douse the Bulldogs’ late comeback attempt.

“We had to get this one out of the mud,” said Burhannon, one of 14 LC players to crack the scoring column. “But everyone on the team made a contribution. Our usual scorers had off-nights, but other guys stepped up. That’s something that will make us grow as a team and get stronger.”

The Blue Bears shot only 35.4 percent from the field and were edged 45-39 off the boards — but that represented a significant boost from their first-half numbers. You could have put a picture of their lost offense on a milk carton in the opening 20 minutes.

“When we came into the locker room,” said Livingstone high-scorer Malik Smith (12 points), “the coaches emphasized that we’ve been down way worse than this. We all needed to bring it together and do our part. As it turns out, we had to play hard until the last minute, but we got there.”

Livingstone relinquished an early six-point lead and trailed by only 26-24 at the half, despite making only nine baskets. It opened the second half with a burst of energy — and six points each by Rashard Todd and Smith — forging a 36-31 lead with 14:34 to play.

“Rashard is coming off a (knee) injury, but he’s expected to do that,” Stinson said. “And (Smith) is a mad man on the basketball. He’s going to press you and get deflections. He got us re-charged.”

Bowie State coach Darrell Brooks talked about missed opportunities after the Bulldogs misfired on 10 free throw attempts and turned the ball over 22 times.

“We had chances, but we’d turn it over or miss some easy shots,” he said after BSU lost for sixth time in its last eight games. “It’s hard to win on the road when you beat yourself. Give credit to Livingstone. They were quick to the ball and handled our pressure. They used their length and athleticism to make us rush shots and turn it over.”

The score was tied six times, the last when Bowie’s Saiquan Jamison (14 points, 11 rebounds) hit a free throw to make it 39-39 with 11:29 remaining. Livingstone then used a 12-4 run — triggered by Navar Elmore’s powerhouse jam and ending with Ramel Belfield’s 3-point splashdown from the left side — to take charge of the game. Burhannon — part of LC’s second five off the bench — secured the outcome with his late layup and four free throws in the last 39 seconds.

“Before the women’s game, I came out and made 59 free throws in a row,” he boasted with a post-game smile. “I was trying for 100 straight, but I had to stop because the Bowie State team was trying to take the court. I was working on it, but got kicked off.”

“He has all the statistics in the world,” the coach said. “He’ll tell you everything he’s able to do and what he’s done. But what he’s done best is accept his role on this team.”

It’s a team that has won three of its last four and is gaining traction in the conference race.

“If we all buy in, we can still win and go far,” Smith said. “Even on a night when we shoot like this.”

NOTES: Bowie State placed four scorers in double figures. … The Blue Bears shot only 2-for-15 on 3-point attempts and were 22-for-30 from the free throw line. Belfield led the team with six rebounds. … Sophomore Roger Ray — LC’s leading scorer with a 17.2 points-per-game average before tipoff — miss all nine of his field goal attempts, finishing with five points in 18 minutes. … Livingstone hosts Shaw University at 4 p.m. Saturday.

Serena Williams says she had health scare after baby’s birth

By The Associated Press Serena Williams tells Vogue that she dealt with a medical scare right after the birth of... read more