Fulmer wants to restore stability at Tennessee as AD 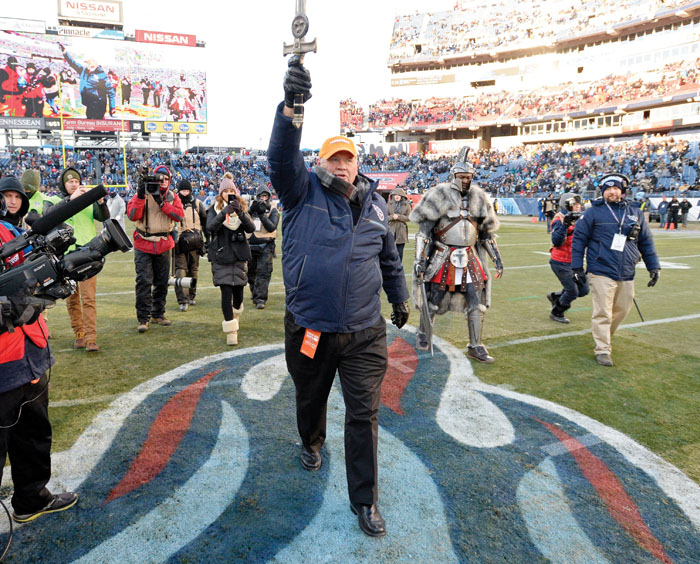 FILE - In this Dec. 31, 2017, file photo, University of Tennessee athletic director and former head football coach Phil Fulmer serves as the Tennessee Titans' 12th Man before an NFL football game between the Titans and the Jacksonville Jaguars in Nashville, Tenn. As the new athletic director, Fulmer says he wants to help bring back the stability that marked the Volunteers' athletic department during much of his tenure as the school's football coach. That stability has been missing for most of the last decade. (AP Photo/Mark Zaleski, File)

KNOXVILLE, Tenn. (AP) — Phillip Fulmer believes stability played a major factor in his coaching success at Tennessee, and he wants to help bring it back.

Stability — built on trust, expectations and communications — was replaced by upheaval.

After taking over as athletic director last month, Fulmer has been working to return Tennessee to the cohesion it enjoyed in its peak years.

The College Football Hall of Fame coach remembers when he had Tennessee’s football program consistently competing for Southeastern Conference titles in the 1990s.  Joe Johnson was entrenched as university president and Doug Dickey was a fixture as athletic director.

“We knew what was expected,” Fulmer said in an interview with The Associated Press. “We weren’t going to embarrass our university or them. They knew that we were going to do the right thing and that we were going to give the kids who were here a positive experience, and those kinds of things. There was a great trust.

“And then the next few years… we had four presidents in six years, there was no stability, nobody communicating, nobody trusting each other. That was horrible to be a part of and go through.”

Fulmer became Tennessee’s fifth AD since 2011 last month when he replaced John Currie, who was removed after only eight months. Fulmer’s first task was to hire football coach Jeremy Pruitt , the fourth man to hold that position since Fulmer’s 2008 forced exit. Fulmer is working for Beverly Davenport, who took over as Tennessee’s chancellor last year.

Tennessee recently concluded a tumultuous search for a football coach.

Currie signed a memorandum of understanding to hire Ohio State defensive coordinator Greg Schiano to replace the fired Butch Jones before that deal was scrapped amid a public backlash . Less than a week later, Fulmer took over for Currie, who was suspended and placed on paid leave while the school investigates whether it can fire him with cause.

“We needed leadership, and I needed someone I could trust and dependent on,” Davenport said via email. “Phillip and I are a great team. He has been welcoming and supportive since I arrived, and I knew he would be a great partner for me. There is no one more committed to the University of Tennessee than Phillip Fulmer.”

Fulmer believes he eventually found the right coach in Pruitt, who had been Alabama’s defensive coordinator .

“When we talked about recruiting and talked about football, he got on the edge of his seat,” Fulmer said. “His passion about it, I loved that.”

Although Fulmer had expressed interest in the athletic director position before Currie was hired in March , his lack of administrative experience makes him an interesting selection. Fulmer had been named a special adviser for community, athletics and university relations last summer .

Fulmer said he has spoken to Alvarez, Tanner and Dickey as well as former Alabama athletic director and Tennessee football coach Bill Battle to get an idea of what to expect. He believes his background gives him an advantage in certain respects because he can communicate with coaches on their level.

“It’s still about building a team,” Fulmer said. “It’s still about communicating It’s about trust. That’s not any different (whether it’s) any business or coaching or being an athletic director. Those principles are the same.”

Fulmer believes stability is returning to Tennessee with Davenport and Joe DiPietro, who has been president since 2011. Even so, Fulmer has a tough task getting Tennessee back where he believes it should be.

Tennessee ranked 46th in the 2016-17 Directors’ Cup all-sports standings , its lowest finish since the award originated in 1993-94. Tennessee never finished lower than 27th during Fulmer’s stint as the Vols’ football coach. Fulmer says he’d like to build the athletic department to the point that each of Tennessee’s teams is at least “in the hunt” for championships.

The letter announcing Fulmer’s hiring said his appointment “has no definite term.” The 67-year-old Fulmer  hasn’t set a timetable for how long he plans to remain Tennessee’s athletic director but says he loves his job and “I’ve committed to these coaches to be here a while, and I’m certainly going to honor that commitment.”

“Every day, I get to be around uplifting young people that are in a great place in life, that have nothing but the world in front of them,” Fulmer said. “My job is to give them the best experience they can possibly have. That’s fun.”