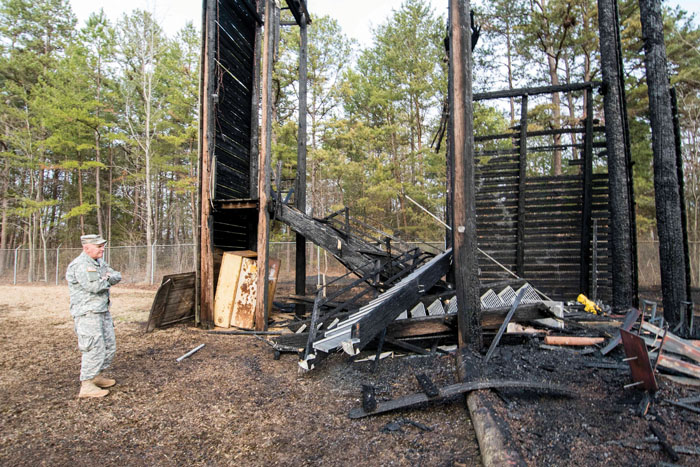 LANDIS — Students at South Rowan High School are reeling after the school’s rappel tower, which has been a core feature of the JROTC program since the early 1990s, burned down in the early hours of Wednesday.

“It’s like Dad coming home and saying, ‘We can’t go on vacation this year,’” said Maj. Bill Lowe, head of the JROTC program.

According to Landis Police Chief Kenny Isenhour, a 911 call about the fire was placed about midnight. It is unclear if the fire was an accident or if it was set deliberately.

Lowe said he received a call about the fire at 1 a.m. Wednesday. By the time he made it to the school, “everything was over except for the smoke.”

“I stood there last night just looking at those blackened poles thinking, ‘Oh my goodness gracious, this is really a bad thing for us,’” he said.

South Rowan’s 40-foot rappel tower was one of only two at Rowan County high schools. The other is at East Rowan High.

“To lose a resource like that is pretty significant,” Lowe said.

“The loss of the rappelling tower is tragic for our JROTC academy and our school as a whole,” school Principal Kelly Withers said in an email. “This structure provided an interactive experience not only for our students but visiting students who traveled to utilize this resource.”

Having an on-site rappel tower drew lots of students to the program. It was one of the first obstacles a cadet must conquer. Lowe said the loss has left many cadets heartbroken.

“The disappointment is real and is significant,” he said. “And every cadet feels it, because a lot of them grew up with that tower. It’s how they began to conquer that very physical fear of heights. … It’s a huge personal victory to cause yourself to go up a 40-foot rappel tower and find out, ‘Yes, I can do this.’”

That confidence is key to helping JROTC fulfill its mission of encouraging students to be better citizens. Lowe said it can transfer to other areas of life.

“It demonstrates to a young person that they are capable of so much more than they thought they were,” he said.

All day Wednesday, cadets wanted to know if and when the tower would be replaced and what the school will do in the meantime.

“And of course no one has the answer to either one of those questions,” Lowe said.

Lowe said he thinks cadets will have to go rappel at other towers at other schools, but that raises complications such as transportation means and costs. But he knows that the students will press on.

“We’ll recover; we’ll keep doing other things and take our kids to other rappel towers. But it won’t be the same as having one right there that we can use,” he said.

While Lowe and cadets hope the tower will be replaced, for now the remains of the old structure stand blackened and “shooting skywards, but with no real purpose anymore.”

Isenhour said he was unable to comment because the fire investigation is ongoing. He did say that the department is partnering with the fire marshal’s office and following leads — including reviewing security camera footage from the school.

“We will be working closely with the Rowan County Fire Marshal’s Office and the Landis Police Department to determine the cause and assist in any way possible if an investigation is deemed necessary,” Withers wrote. “We appreciate the prompt response of fire, police and emergency personnel this morning and their support throughout the day.”