Duke bounces back with win over Pittsburgh 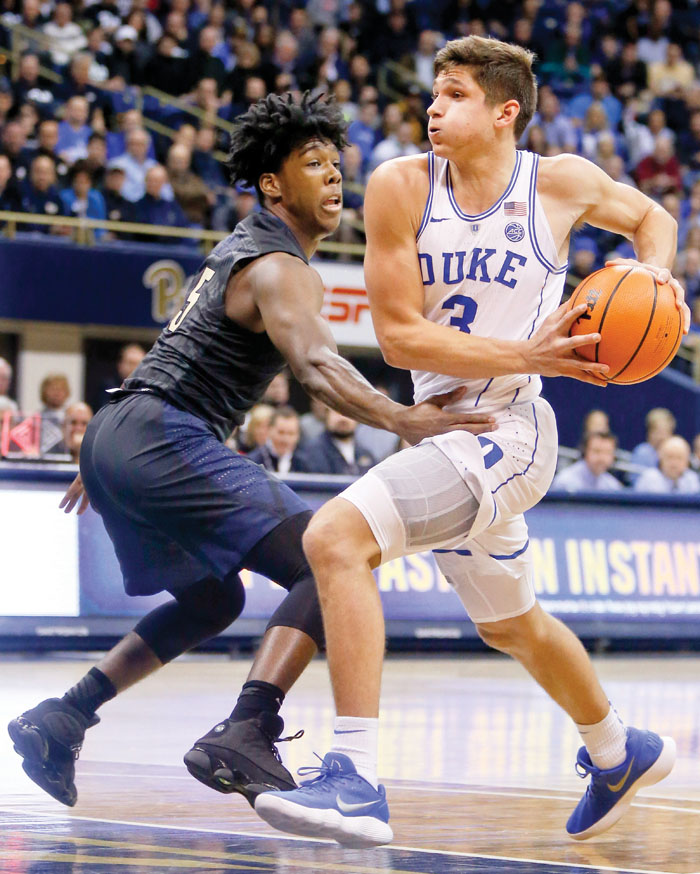 Duke's Grayson Allen (3) drives to the basket as Pittsburgh's Marcus Carr defends during the first half of an NCAA college basketball game Wednesday, Jan. 10, 2018, in Pittsburgh. (AP Photo/Keith Srakocic)

PITTSBURGH (AP) — Mike Krzyzewski knows he doesn’t have a lot of time to pack in a full college career’s worth of lessons on his supremely talented freshmen-laden roster. The Duke coach knows he’s got six months. Tops.

So after watching the seventh-ranked Blue Devils look disjointed and disinterested defensively in an upset loss at North Carolina State last weekend, Krzyzewski basically locked his team in the gym and forced them to get serious at both ends of the court, not just the fun half.

The early results were promising, even against an overmatched opponent. Marvin Bagley III scored 16 points and grabbed 15 rebounds and Duke held Pittsburgh to 33 percent shooting in an 87-52 victory on Wednesday night. Trevon Duval and Gary Trent Jr. added 14 points each for the Blue Devils, who had six players finish in double figures.

“We’ve been practicing like crazy trying to get better,” Krzyzewski said. “We were better tonight. We have to just keep working at it. They’re young kids and we’re not deep. They’re real young and they have talent but they’re real young and have to keep learning these new habits. Today was a step forward.”

Bagley also blocked a shot while recording his 13th double-double of the season, one shy of the Duke freshman record shared by Jabari Parker and Gene Banks. The 6-foot-11 Bagley, one of the best NBA prospects in the country, did it despite shooting 7 of 16 from the field and just 2 of 8 from the free throw line. Not that it mattered against the undersized Panthers.

After listening to his coach preach defense over and over (and over) after N.C. State ran right by them, Bagley understood the Blue Devils (14-2, 2-2 Atlantic Coast Conference) needed to stop worrying about scoring baskets and start worrying about preventing them. The proof came during a dominant opening 17 minutes in which Duke built a 30-point lead.

“You could hear a lot of the players, everybody actually, calling out screens,” Bagley said. “Just everybody was talking and connecting and that allowed us to be more alert and to move as one, that really helped us a lot tonight.”

Duke limited Pitt (8-9, 0-4) to just 24 points in the opening half, the second-fewest the Blue Devils have given up in the first half this season.

“We can’t give up 93 points a game like we have been,” said senior guard Grayson Allen, who finished with 11 points. “Tonight we did a much better job at that. Just talking as a young team, having that focus on defense and knowing it can lead to our offense pretty quickly.”

Jared Wilson-Frame led the Panthers with 17 points but Pitt was never in it. The Blue Devils made their first four shots and by the time Pitt’s Shamiel Stevenson hit a layup 4:05 in, the Panthers were already down eight. Bagley then responded with a dunk and hook shot and the competitive portion of the game was effectively over.

“We just didn’t have enough answers tonight,” Pitt coach Kevin Stallings said. “In the first half, they were just awesome.”

Krzyzewski believes Pitt should use a little patience when it comes to Stallings, in the second season of what is a massive roster rebuild. While the four freshmen the Blue Devils started will be in the NBA sooner rather than later, the five Stallings put in his starting lineup will need years to develop into a cohesive group.

“You all should stick with what’s going on,” Krzyzewski said. “(Stallings) is a really good coach and a good guy. … Kevin is trying to build a program, not a team.”

Duke: The blowout gave the Blue Devils a chance to get well defensively while also providing Krzyzewski an opportunity to give his thin bench plenty of run. Nine players saw at least 13 minutes of action even with Duke sitting injured backup center Marques Bolden and sixth-man Javin DeLaurier.

“Our subs came in and looked like they were starters,” Allen said.

Pitt: A long season figures to get even longer with senior forward Ryan Luther still in a walking boot and his return uncertain. Luther, the team’s leading scorer and rebounder, is dealing with a stress reaction in his right foot.

Stallings said the prognosis for Luther is “not great.”

Duke: hosts Wake Forest on Saturday. The Blue Devils have won each of the last six meetings with the Demon Deacons.

Pitt: welcomes Georgia Tech on Saturday. The Panthers are 4-1 against the Yellow Jackets since joining the ACC in 2013.