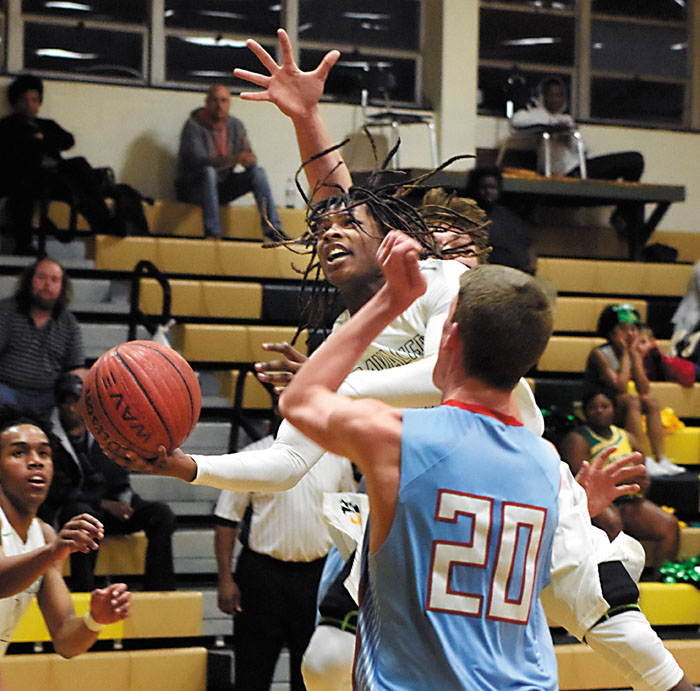 SPENCER — North Stanly rolled into North Rowan’s gym Wednesday night with eight players, including a recent junior varsity call-up. All of them played and just four of them scored but one of them was named Bryson Childress.

A diminutive 5-10, 145-pound junior point guard with a big shot, Childress burned the host Cavaliers for 36 points, sparking a crucial 66-62 win. The close loss was the first in the Yadkin Valley Conference for North Rowan (8-5, 7-1 YVC), although they still hold a half-game lead over the Comets (11-4) and Albemarle, both 6-1.

Local folks had already seen Childress and the Comets in the Dale’s/Sam Moir Christmas Classic last month, where they won two games and knew Childress was a threat to take over a game with his scoring ability.

Wednesday night, Childress did just that, with six 3-pointers and 11-of-13 free throws to enable the Comets to take control over final four minutes of the game.  Childress showed that another one of his attributes is humility.

“I just can’t put it all on me,” he said. “I mean, my guys put me in a position to score by setting good screens and making good passes. It was more of a team effort than just me.”

The Cavaliers got their own stellar performance from junior forward Brevin Goodlett with an impressive double-double of 24 points and 16 rebounds, many of them offensive boards. Goodlett’s three-point play gave North Rowan its first lead at 32-31 in the third quarter, then the Cavs hit eight consecutive free throws to go up, 42-36, with 2:54 left in the period.

That must have been Childress’ cue to take over the game because that is exactly what he did at that point. Childress hit four consecutive 3-pointers, including a buzzer-beater for a 48-47 Comets’ lead, heading to the fourth quarter.

“Bryson made a lot of really crazy shots from all over,” Goodlett noted. “I mean we were on him, but he was still able to hit his shots. We will just have to bounce back and get ready for Friday.”

As expected, the game was in doubt until the final minute. The score was tied twice at 52-all and 54-all, and it was two-point game with just over two minutes left. A North Rowan turnover and then a crucial steal by Childress with 1:31 to play enabled the Comets to pull ahead, 60-54. Childress, Carson Lowder (17 points) and Colby Lamp (six points) then hit 8-of-10 foul shots to hold the Cavaliers at bay.

“It was definitely a huge win for us,” said Comets’ head coach Chris Misenheimer.” I think that handling the physicality that North Rowan puts out there let us know we can play with anybody. North Rowan is a great program and when you can get a good win at their place, it means a lot to our team.”

The Cavaliers were hampered by a poor shooting night, especially from long range. “We just need to learn how to finish,” North Rowan head coach Martin Unger said. “We took too many threes and the wrong people were shooting them. Then when we did get inside, we did not finish as well as I would like. We have just got to get back together and regroup, because we have another huge game this Friday.”

Following Goodlett in the scoring for the Cavaliers was junior forward Dayjuwon Cooke with 16 points, including 8-of-9 from the foul line. Sophomore big man Chaz McCombs had a strong outing with eight points and five rebounds.

The next big test for North Rowan is Friday night at home, hosting Albemarle with first place in the YVC on the line. North already has one win over Albemarle, back on opening night. North Stanly plays at home this Friday against South Davidson.