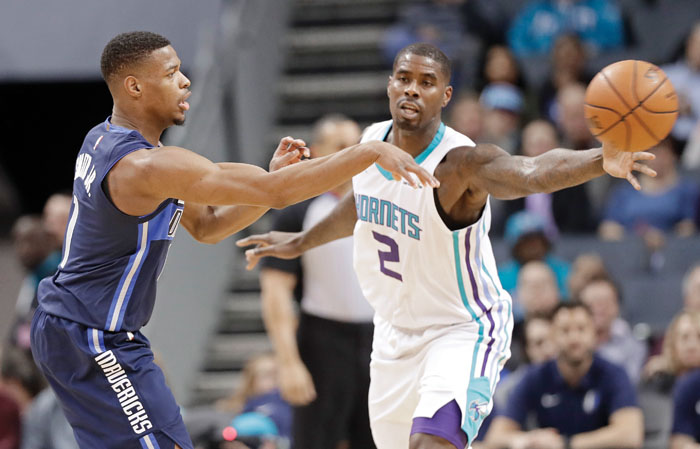 CHARLOTTE (AP) — Mavericks point guard Dennis Smith Jr. had a simple strategy in the fourth quarter when it came to Harrison Barnes.

“Give him the ball and get out of the way,” Smith said.

Barnes said he liked his matchup against Frank Kaminsky in the fourth quarter.

“I just tried to be aggressive and attack the rim,” Barnes said. “I saw a few shots drop and I was kind of in a rhythm after that. Coach kept going to me and just kept on converting.”

“He hit on a variety of shots — 2s, 3s, drives,” Carlisle said. “Look that’s what great players do. Really proud of him. He had a pretty good rhythm going all night. We just needed to get the ball in his hands.”

Dirk Nowitzki added 19 points — one shy of his season high — and Smith had 15 points and six assists.

It was a crushing loss for the Hornets, who were coming off a 3-1 West Coast road trip that included a win over the Golden State Warriors.

Kemba Walker had 41 points on 16-of-28 shooting for the Hornets. Dwight Howard had 15 points and 12 rebounds for Charlotte, but was an anemic 5 of 18 from the foul line, which proved costly in a close game.

The Mavericks were playing their third game in four days, while the Hornets were coming off a four-day layoff. But Dallas showed no signs of wearing down in the fourth quarter, repeatedly thwarting Charlotte’s attempts to take the lead.

Charlotte trailed by six entering the fourth quarter, but Jeremy Lamb buried a 3-pointer from the right wing to pull the Hornets even with 9 minutes left.

But the Hornets could never grab the lead.

The big play came with 2 minutes remaining when Salah Mejri ripped an offensive rebound away from Howard and kicked the ball out to Ferrell, who buried a 3-pointer from the top of the key to give the Mavericks a 5-point lead.

Barnes followed with a long 3 on the next possession.

“I told him, if you aren’t getting the ball enough, let me know,” Smith said. “I will do whatever it takes to get it to you, especially if you are in a groove like that. That’s what he does, he closes.”

Mavericks: The team was awarded two-way forward Jalen Jones on a waiver claim. Per team policy, terms of the deal were not disclosed. In a related move, the Mavericks also requested waivers on two-way guard Kyle Collinsworth.

DIRK DOES IT AGAIN: Yes, it’s painful to watch him run up and down the court, but Nowitzki still finds a way to be productive in his 20th season. He repeatedly hit big shots — both 3s and fadeaways — at clutch times.

“Dirk’s really one of the most amazing athletes I’ve ever seen or been around,” Carlisle said. “To perform like this at the advanced age of 39 in the NBA is just unbelievable.”

HORNETS ‘DIRE’ WITHOUT WALKER: The Hornets (15-24) are struggling, but Silas said things would be “pretty dire” to imagine the team without Walker, who is second in scoring among point guards in the Eastern Conference.

“He does everything,” Silas said. “He comes up with big steals. He goes for charges. He makes every big pick and roll play, every shot, every play for everybody else.”