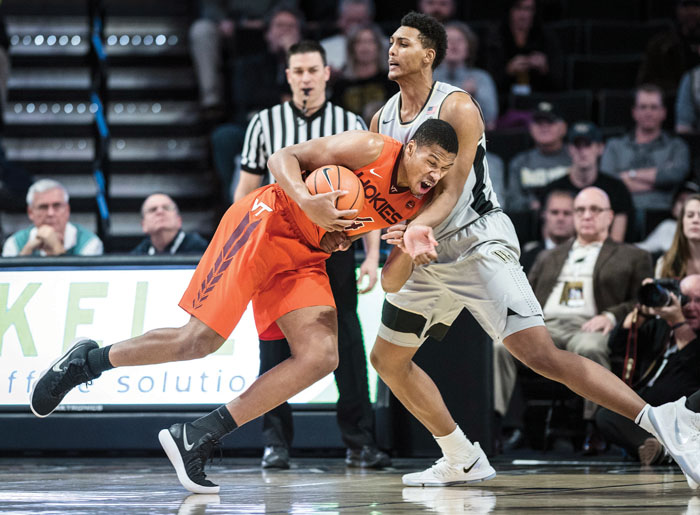 Robinson had just one basket before his flurry in the final 2 minutes. One was a stickback while being fouled for a 3-point play, another was a driving layup and a third came when he beat Brandon Childress to a long inbounds pass for a score.

Each proved critical for the Hokies (13-4, 2-2 Atlantic Coast Conference), who had seen the Demon Deacons whittle a 17-point deficit midway through the second half to four twice in the final five minutes.

Robinson finished with 13 points, including a 4-for-4 showing at the line in the final 32.3 seconds to help clinch the win.

Childress scored 17 points for the Demon Deacons (8-8, 1-3), who shot 51 percent after halftime but couldn’t complete their comeback.

Virginia Tech: The Hokies were the aggressor early, leading 45-30 at halftime and 61-44 with 11:42 left before having to turn away Wake Forest’s rally. Another positive sign was the 3-point shooting; the Hokies made 12 of 28 tries from behind the arc. That was their best output in a month considering they had made just 25 of 102 (24.5 percent) over the past five games.

Wake Forest: The Demon Deacons trailed the entire way and struggled to dig out of a hole that began from the opening tip. Childress got going in the second half to provide a spark, but Wake Forest never could string together enough stops at critical moments to complete its climb back.

The Yellow Jackets (9-7, 2-1) pushed out to a 10-point halftime lead and held off depleted Notre Dame (13-4, 3-1) the rest of the way for their second straight conference victory. The Irish were missing two of their top players, preseason All-America selection Bonzie Colson and Matt Farrell.

Okogie darted into the lane and banked in a jumper with 2:05 remaining to give the Yellow Jackets a 58-53 lead. He tacked on two free throws with 18.1 seconds left to clinch the victory.

Notre Dame’s final points came on John Mooney’s dunk with 3:20 remaining. The Irish missed their final five shots, mirroring their struggles at the end of the first half.

The visiting team led 18-17 after Martinas Geben’s dunk with nearly nine minutes remaining in the opening period. Notre Dame managed only two free throws the rest of the half.

The Irish clanked their last 11 shots from the field, also missed four free throws and turned it over three times, allowing Georgia Tech to put together a 13-2 run and a 10-point edge at the half.

Notre Dame had won six of seven despite its injury woes.

Colson had surgery last week for a broken left foot and is expected to be out for at least eight weeks. Farrell, a senior point guard who is averaging 15.9 points a game, missed his second straight game with a sprained left ankle.

Notre Dame: The Fighting Irish have shown plenty of grit without Colson and Farrell but couldn’t pull off another win. They were on cusp of cracking The Associated Press Top 25, missing out by only one spot in the latest poll, but this loss might keep them out for at least another week.

Georgia Tech: After a discouraging start to the season, including losses to Grambling State, Wofford and Wright State, the Yellow Jackets appear to be recapturing the form they showed last year on the way to the NIT title game. They’ve won two straight ACC games at McCamish Pavilion, showing an ability to at least protect their home court.

Georgia Tech: After wrapping up a three-game homestand, the Yellow Jackets go to struggling Pittsburgh.