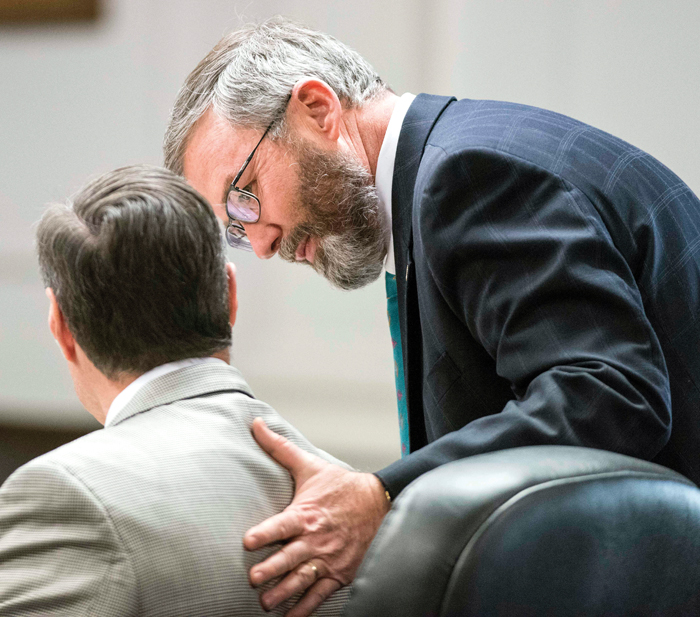 SALISBURY — Emotions were high in court Tuesday on the first day of testimony as jurors heard from the fiance of Shirley Goodnight Pierce about the night he discovered her dead.

Chuck Reeves recalled how he found the 62-year-old after she was murdered in her Kannapolis home four years ago.

Marlene Postell Johnson, 65, is on trial for the murder of Pierce, who was beaten and stabbed to death. She could face life in prison if convicted. Rowan County Sheriff’s Office investigators say Johnson believed Pierce was having an affair with her estranged husband, Ervin Johnson.

Investigators said Johnson’s assumptions were wrong. Pierce had obtained multiple restraining orders against Marlene Johnson; the final one expired a few weeks before her death. Detectives said they found some of Pierce’s mail and aerial photographs of Pierce’s home in Johnson’s possession.

Reeves detailed how he found his fiancee at her home on July 23, 2013, two days after he’d last seen her. Pierce had spent the weekend at Reeves’ Columbus, North Carolina, home where they had a party for his sister. He said he spoke with her Monday after she left work headed home sometime after 8 p.m. Reeves said she often worked from 8 a.m. to 8 p.m. or later.

The couple, who had known each other for 12 years, began dating three or four years before Pierce’s death and became engaged on April 4, 2013, Reeves said. They alternated spending weekends at each other’s home.

Reeves said he went to her Evandale Road home to drop off his two dogs while he went out of town for work. When he arrived, her garage door was open, but that didn’t seem out of place to him. But the interior door from the garage was locked, and Pierce never locked it, he said.

He didn’t have a key to the house but knew where a spare key was hidden. Reeves testified that Pierce had a key hidden in a KFC food container buried under pine needles near a tree in her yard. He used it to open the front door.

Reeves said before entering the home, he let his dogs out and checked Pierce’s mail, but there was none.

The home was ransacked, including the kitchen and Pierce’s bedroom. Reeves said Pierce kept an immaculate home and it was odd that her belongings would be strewn about the rooms. The television was on in Pierce’s bedroom and the water in the bathroom was turned on, Reeves said.

He called her name but got no response. Reeves told the court he walked down the hall into Pierce’s bedroom, then into her bathroom. He pulled the shower curtain back and found Pierce lying in the bathtub. He said she was pale, stiff and cold to the touch.

Reeves said the only things he touched in the house were the doorknobs when he came into the home, the water faucet when he turned it off, the shower curtain and Pierce’s forearm. He backed out of the bathroom and dialed 911 while still inside her home.

In court Tuesday, Reeves looked at photographs that showed Pierce’s body in the bathtub. While describing the state of Pierce’s body, Reeves became emotional. Members of Pierce’s family could be heard sobbing.

Marlene Johnson also wiped at tears and could be heard sniffling from her seat at the front of the courtroom.

Members of Johnson’s family could also be heard sniffling and seen wiping away tears.

Reeves said he misdialed 911 a few times before he was able to place the call. He thought about going to his car for his cellphone, but because he was overcome with emotion, Reeves indicated that he didn’t think he could verbalize the address.

Jurors heard the call Reeves made to 911. In the call, Reeves managed enough composure to answer questions from the 911 operator.

“Oh my God. I just arrived here to my girlfriend’s house. I think she’s been killed,” Reeves said.

At one point, Reeves asked if the operator was sending police. The operator told him she was “sending everybody.”

“Do you think she’s beyond help?” the operator asked.

The operator asked Reeves to go back and check for a pulse to confirm whether Pierce was dead.

Reeves told the operator there was blood all over the bedroom floor and what appeared to him to be bleach and wipe marks on the floor.

“Can you tell if she was stabbed or shot?” the operator asked.

Reeves said he could not tell, just that there was blood everywhere.

According to the autopsy report, Pierce was stabbed in the carotid artery in an attack so violent the knife broke off in her neck. The knife blade wasn’t discovered until the medical examiner performed an autopsy on Pierce’s body.

Defense attorney Jay White asked Reeves about finding Pierce and how her body was positioned in the tub. Reeves said she was sort of leaning against the back of the tub and had only a nightgown on.

“I noticed she still had the engagement ring I gave her,” Reeves said, his voice shaking.

White asked Reeves if he recalled seeing any injuries on Pierce’s body. Reeves said he believed his mind blocked out a lot of what he saw that day.

Jurors also heard from the first three Enochville Volunteer Fire Department firefighters who arrived on the scene. Ryan Yost, Taylor Barnes and Craig Miller confirmed that Pierce was already dead and that they only went into the bathroom and then left the house.

Former Rowan County Deputy Randy Rigsby testified that he was on patrol that day in Enochville, which was his patrol coverage area. He said the call came in as a possible death under suspicious circumstances. Rigsby said he didn’t touch anything in the home.

He said he did observe an overwhelming odor of bleach and what appeared to be wipe marks on the floor.

Testimony will continue at 9:30 a.m. today in Superior Courtroom 2.